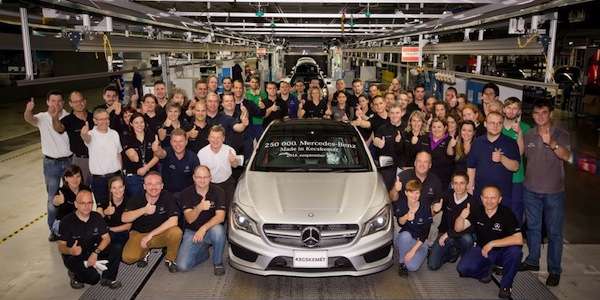 The 2015 Mercedes-Benz CLA-Class is a big hit in the U.S. What makes this silver CLA45 AMG model so special?
Advertisement

The buyer of this 2015 Mercedes CLA-Class will get a monumental surprise when they take delivery of the performance car. Mercedes-Benz celebrates this CLA45 AMG as it rolls off the assembly line at the new Mercedes-Benz plant in Kecskemet, Hungary. This right-hand drive, polar-silver CLA 45 AMG is the 250,000th vehicle to roll off the line after only two and a half years after the new plants opening. Mercedes says the CLA45 AMG is already sold and will go to customer in Japan. They will be surprised when they find out it's special significance.

The Mercedes plant in Hungary plays an important part in the success of Mercedes-Benz in the luxury compact car segment. Workers in this plant also produce the B-Class and the CLA-Class exclusively for all global markets. This year, they’ve produced almost 290,000 A-Class, B-Class, CLA-Class or GLA-Class models.

CLA-Class a big hit in the U.S.

Mercedes says since its market launch in Europe in April 2013, more than 100,000 CLA cars have been handed over to customers all over the world. The CLA250 is a big hit in its single most important market, the USA. Every fourth vehicle of the model series is driven by an American customer. CLA-Class has been a big hit with U.S. buyers.

This was all part of “Mercedes-Benz 2020” growth strategy. The new Mercedes-CLA-Class isn’t the only new compact car selling well for the brand. Mercedes reports, altogether, sales of the new generation of compact cars with the three-pointed star have reached more than 800,000 units.

The new 2015 CLA45 AMG that rolled off the assembly line as the 250,000th vehicle gets an all-new engine, and gets dynamic performance with the world’s most powerful turbocharged four-cylinder engine and high-performance 4MATIC all-wheel drive system. The Kecskemet plant will also produce the fifth compact model, the 2015 CLA Shooting Brake, which will make its market launch next year.

Other 2015 Mercedes-CLA-Class stories of interest.
Why so many Mercedes CLAs have remarkably made it into a new generations hands