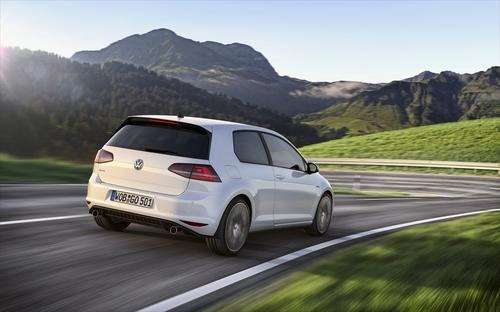 When the all-new 2014 Volkswagen Golf GTI makes its debut in Geneva, it will be the hottest version ever with even more horsepower and a new performance pack.
Advertisement

Volkswagen has announced that the new 2014 Golf GTI makes its global debut at the 2013 Geneva International Motor Show and will be available with even more horsepower than ever before. GTI has always meant more driving fun for the Volkswagen brand and the new 2014 GTI will follow in that tradition. The new hot hatch gets even hotter with the addition of two new power levels to bring even more driving excitement. The iconic 2014 GTI gets a bump in power from 200 horsepower from the previous generation to 220 horsepower for the standard model and 230 hp with a new performance pack.

Of course the Europeans get the higher-performance pack which is being offered for the very first time. The extra 10 horsepower factory installed European model also comes with bigger brakes and a torque-sensing limited-slip differential. Why doesn’t the U.S. model get the optional goodies? We aren’t sure, but it could have something to do with emissions here in the U.S. At least we do get the new 220 hp 2014 GTI hot hatch and the six-speed manual transmission is still available for driving enthusiasts.

How fast is it?

Of course the first question we need to ask is how fast is the new 2014 GTI? With the manual, the hot new GTI will launch from 0-62 in just 6.5 seconds (6.4 with the European performance pack) with a top speed of 153 mph (155 mph with the performance pack). Performance figures for the DSG version haven't yet been released. That makes the new 2014 GTI one fast little hatch in either the U.S. or Europe. It not only goes fast but looks fast. The performance nature of the Golf GTI is seen with its red-painted brake calipers peaking through the 17-inch “Brooklyn” GTI wheels. It also sports twin chrome tailpipes, and a lowered sport suspension for extra performance in the corners.

The new GTI will come with the latest direct-injection technology and a turbocharged gasoline engine that makes 220 hp and 258 pound-feet of torque for the U.S. version hatch. Both European and U.S. models will come equipped with a Stop-Start system, fulfill the EU-6 emissions standard that takes effect in 2014, and attain the same excellent DIN gas mileage figure of 39.2 mpg—which equates to 139 g/km of CO2—when equipped with the six-speed manual transmission.

The new GTI is even more fuel efficient and boasts an 18 percent improvement in fuel economy compared to the previous model. With the optional six-speed DSG dual-clutch automatic transmission, the 220 and 230-horsepower GTIs return 36.8 and 36.2 mpg respectively (equivalent to 148 and 150 g/km CO2). The new Golf GTI will compete with the new 2014 Kia Forte 5-door hot turbo hatchback that rolled out in Chicago and the new performance 2014 Ford Fiesta ST that just launched in Europe.

More GTI goodies inside and out

Look for the debut of the new hot 2014 Golf GTI in Geneva with the market launch in Europe in May 2013 with prices starting at 28,350 euros. The 2014 GTI U.S. launch is expected to be later this year with prices announced closer to launch date.