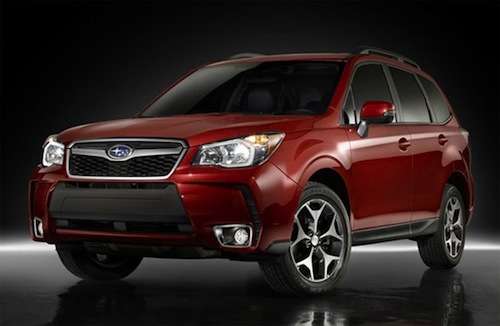 Subaru has unveiled the all-new 2014 Forester in China at the 2012 Guangzhou International Motor Show in the midst of consumer backlash and economic uncertainties in China.
Advertisement

Fuji Heavy Industries Ltd., the maker of Subaru automobiles announced today that the all-new 2014 Forester has made its Chinese debut at the 2012 Guangzhou International Motor Show which opened today in Guangzhou, China. As the new crossover rolls out across the globe the Forester is expected to be a global car and will make its North American debut at the Los Angeles Auto Show later this month.

Subaru unveils the new Forester in China at a time when its Japanese competitors have shut down plants in China due to a territorial dispute between Asia’s two largest economies. Subaru is the only major Japanese automaker that does not have a plant in China and it has been a blessing in disguise. Subaru’s smaller presence in China has helped shield it from a consumer backlash triggered by a decades-old territorial dispute involving a group of islands called Senkaku in Japan and Diaoyu in China. Chinese consumers have responded by not purchasing Japanese cars which has caused deliveries to slump and the competitors factories have been idled.

Even though the consumer’s anti-Japan protests have subsided in China, tensions continue to simmer. Fuji Heavy Industries Ltd. President Yasuyuki Yoshinaga said at the unveiling of the new Forester SUV last week in Tokyo, “Selling cars in China is difficult now. Luckily we can cover the loss there by producing more cars for Japan and the U.S., since we don’t have a plant in China.”

The 2014 Forester is popular in China

With the Forester accounting for 50 percent of Subaru’s sales in China, the Japanese automaker introduces the new global car at a good time in spite of consumer difficulties. The Chinese auto buyers have flocked to the Forester in the past and sales should remain strong as Subaru has maximized the value of the crossover.

The all-new 2014 Forester features Subaru’s renowned Symmetrical all-wheel drive system as its core technology, and the fourth generation Forester offers a higher level of driving, safety and environmental performance.The new Forester for the Chinese market comes standard with special features including the "Shark Fin" style radio antenna and side window chrome moldings applied around the whole perimeter. The unique differences are designed to enhance the Forester’s product appeal to the Chinese customers.

Subaru is expanding production in the U.S.

Sales in China may slow due to the dispute, but U.S. sales are healthy as Subaru gets ready to unveil the all-new Forester in LA. The Japanese automaker plans to boost capacity at its plant in Lafayette, Indiana, by 11 percent to 300,000 cars annually and is considering further expansion in the U.S. The popular Impreza, BRZ and XV Crosstrek will continue to drive sales. Interest has been high here in the U.S. for the all-new 2014 Subaru Forester, and we can look for the next global debut to be in Los Angeles on November 28th.