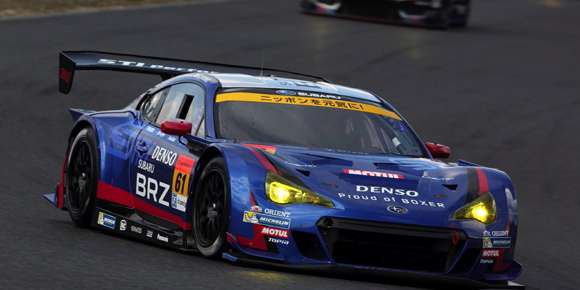 The 2014 Subaru BRZ GT300 starts the season with an accident at Okayama International Circuit.
Advertisement

Just because you have a new race car, there are no guarantees you will win every race. The new 2014 Subaru BRZ GT300 started well, but an accident ended any hopes of a podium finish for the BRZ GT300 Subaru team yesterday. The SUPER GT season opener 300km race was held at Okayama International Circuit on Sunday and it was a rough day for the Subaru BRZ team.

The race car was involved in an accident, could not be repaired and finished in 21st place. The track was hit by bad weather with sleet and rain pounding the circuit early in the morning. Temperatures were cold but there was blue sky when the race started. It went down hill quickly as the BRZ GT300 came in contact with multiple cars on the opening lap.

The #61 Subaru BRZ GT300 race car was rear-ended and there was damage to the rear diffuser. The BRZ continued to race for a number of laps but the team decided to repair the car in the pits before continuing. The BRZ GT300 lost valuable time and 10 laps while the race car was being repaired. The BRZ GT300 never caught up with the leaders and finished in 21st place because of the accident.

Sasaki who was driving when the accident occurred said, "I think you can not be helped because it was an accident it is not, but try to avoid in the confusion, but it is a disappointing result. We want to show our fans a better result in the next race"

The whole team was disappointed with the result. STI Team Direstor, Tatsumi Eiji said, “It is no only be called the most unfortunate "accident. takes a long time to repair of the rear diffuser, it has become a game out of service at that point. The relatively after but he still restart. Because it runs herself as hard as she can Fuji. following I think it was able to run in a stable manner, and it looked a little better fight through the season, thank you for your support to continue "

The 2014 BRZ GT300 qualified in 12th place out of 24 over the weekend. The team struggled with the low temperatures on the track all weekend and they never seemed to be able to adjust to the lack of traction. But the team is confident they will have a better result in the next race.

Last season, the 2013 Subaru BRZ GT300 race car snatched pole position five times in eight races and achieved a class win, so it was a successful first year for the BRZ two-door sports coupe. This year’s 2014 Subaru BRZ GT300 has been upgraded from last years model by Subaru Technica International (STI) who led the development of the car. R&D Sport who organizes the race team, has upgraded the new 2014 version and STI will still aim for a series win this year. Stay tuned to Toque News for the latest 2014 Subaru BRZ GT300 news.

Paul Barad wrote on May 1, 2014 - 11:00am Permalink
My 2011 outback,when almost at a standstill ,engine started raciing and car accelerated forward at high speed into a Br brick pole