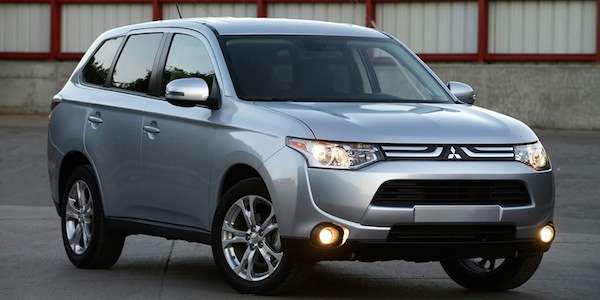 We test the all-new 2014 Mitsubishi Outlander with the GT package, 3.0-liter V6 and all-wheel drive. What makes this new Outlander GT good for moms and dads?
Advertisement

Mitsubishi as a company is going through lots of changes and it shows up in the all-new 2014 Outlander SUV. It gets a total redesign and Mitsubishi hopes the new SUV will help them regain market share around the globe. This week we’re reviewing the 2014 Mitsubishi Outlander 3.0 GT S-AWC. The Outlander has lots of competition in the mid-size SUV market, but Outlander comes with third row seating which sets it apart from most others. This GT is more sporty and dads may be impressed.

The 2014 Mitsubishi Outlander is all-new for 2014 and even though it has the same wheelbase, length and track, it comes with more interior room. Outlander has a new engine, new suspension in the rear, a new cabin, new glass, and all new sheet metal outside. The S-AWC system has been improved for 2014. The best thing that has changed? The ugly shark mouth grille is gone. Outlander still isn’t the most beautiful midsize family crossover on the planet, in this writers opinion, but looks can be deceiving.

Let’s climb aboard the new Outlander and see what changes Mitsubishi has made. The first thing we notice is that Outlander has been upgraded with new and improved materials inside. It gets a new soft-touch instrument panel, glossy black center console, and wood trim in the GT model we are testing. The front and rear seats are redesigned and feel more supportive, but the padding is just a touch on the firm side. Operation of the fold-flat 60/40 second row and 50/50 third row has been simplified and it works faster than the outgoing model.

Outlander on the road

Outlander comes standard with a 2.4-liter four-cylinder engine, but the GT model gets the more powerful 224-horsepower V6 that will get you there faster. The GT with 3.0-liter V6 comes with the all-wheel-drive and comes mated to a sweet 6-speed automatic transmission with paddle shifters. If you want to get dad excited about driving a family hauler, there’s no better way than to attach steering wheel paddle shifters and use a smooth-shifting transmission.

On the highway, the first thing we noticed was how quiet the cabin of this new Outlander is. Mitsubishi says they added more sound insulation material throughout the vehicle and we could tell. They also spent many engineering hours on reducing wind noise and they succeeded. The V6 has enough power for most driving situations and has the same power as the outgoing model but gets better fuel mileage. Fuel mileage is rated at a combined 23 mpg and 20/28 city highway. We didn’t get anywhere close to that, but we tested the Outlander at altitude and pushing this SUV hard up the mountains west of Denver won’t win any mileage contests. We push our test vehicles hard during the week and pass all those Prius drivers going 50 in a 65.

A bright spot is the sweet 6-speed automatic with the V6 GT with paddle shifters. If you like to drive, get the Outlander GT. It’s a sporty variant and keeps things interesting while hauling kids and making runs to the grocery store. Handling in the Outlander GT is tighter and quicker than the four-cylinder front-drive model. It performed well in the corners and the ride is solid. If you need more power, the V6 is definitely the way to go. This tester had plenty of power and GT handling is better than the average mid-size SUV.

Mitsubishi says they reduced weight in the Outlander by 200 pounds and it feels like it in its quickness. Don’t think that the seven-passenger SUV is nimble, but the GT is more agile than some others. There were also design changes to the suspension that tightened the cornering dynamics. Outlander received a lighter multi-link rear suspension that improved the ride and low-friction seals in the axles to reduce rolling resistance, and improve fuel mileage. And lighter alloy wheels contribute to responsive handling.

Trying to decide if you need AWD?

This is one of Mitsubishi’s strong points. The Japanese automaker has decades of 4WD experience that come from their World Rally racing experience, and they have many victories to prove it. Outlander comes with an all-wheel-drive system called Super All-Wheel Control (S-AWC) that is a good one. The system uses torque vectoring (shifting the power between the front wheels as needed for grip) to further improve control during cornering. It gets improvements for 2014 that have made it lighter and more efficient.

How does it work? S-AWC has four driving modes: ECO for fuel mileage (2WD), Normal, Snow and Lock. Lock provides the maximum percentage of drive to the rear wheels. Eco mode uses up to 20 percent of the drive that goes to the rear wheels for traction; in Normal mode it uses up to 50 percent; in Snow it reduces throttle input and in Locked it's 50/50 but can to go 30/70 front/rear. If you live in a snowy climate, get the Outlander with all-wheel drive. You will be glad you did.

The GT Touring Package comes with Lane Departure Warning, Adaptive Cruise Control, and Forward Collision Mitigation. Automakers are making improvements to the LDW, but let’s just say its still annoying, but thankfully it can be turned off. The other two systems work, but they do take some getting used to.

Mitsubishi Outlander is all-new for 2014 and it’s a good family hauler if you need a third row. Upgrades to the interior make it more comfortable and roomy. The GT with the V6 is especially responsive and offers better handling than the base model. The GT model is more sporty and is for those who want a more responsive driving experience. What Outlander lacks in exterior styling, the new midsize family crossover succeeds in a big way in ride quality, quiet cabin and in its excellent all-wheel drive capabilities. If you need an all-weather seven-passenger crossover for the family, take a look at the new Outlander.