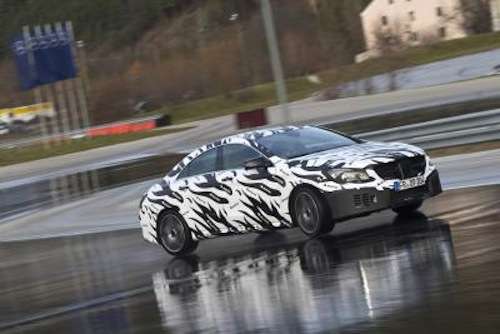 The new high-performance 2014 Mercedes-Benz CLA 45 AMG will premiere next year with a new variant of the 4MATIC.
Advertisement

The all-new Mercedes-Benz 2014 CLA is a new model from the German automaker and it will make its launch next spring. We saw the Concept Style Coupe which made its world premiere at the Auto China fair this April, which was a forerunner of the production model. In keeping with its sporty positioning, the compact mid-range coupe is available in the top model CLA 45 AMG. The new high-powered top model will give Mercedes a fascinating high-performance vehicle in the compact class and broadens the portfolio of Mercedes-Benz's high-performance AMG brand.

The 2014 CLA 45 AMG will launch with the newly developed AMG 2.0-liter four-cylinder turbo engine producing 211 horsepower and 295 lb ft of torque. Mercedes developed the new engine to be both powerful with its considerable torque, but also fuel-efficient. Fuel mileage numbers haven’t been released, but Mercedes says the new CLA will lead the competition with low fuel consumption. The new CLA 45 AMG will be the athletic front runner for the class.

In conjunction with the new AMG 2.0-liter four-cylinder turbo powerplant, the new CLA 45 AMG will be featured with an all-new 4MATIC that will a power take-off to the rear axle. Power is transferred to all four wheels via the AMG Speedshift DCT seven-speed automatic sports transmission. The new unit will be integrated with an electrohydraulically controlled multi-disc clutch that will allow fully variable distribution of the drive torque between front and rear axle. A big benefit of the new design lowers the weight of the 4MATIC making it more fuel-efficient.

On the outside, the new compact CLA mid-range coupe received its inspiration from the SLS and CLS modern Mercedes classics. Underneath it gets the latest safety features that include an advanced Collision Prevention Assist Plus. In addition to outputting visual and acoustic warnings when an impending danger of a rear-end collision is identified. The system is able to carry out autonomous partial braking if the driver fails to respond to warnings and a danger of collision persists. Inside, the new CLA features smartphones that can be fully integrated into the vehicle's display and operating system.

The new Mercedes-Benz 4MATIC will also be featured in the four all-wheel drive versions which have been available to date. The new 4x4 technology will be tailored to the new compact class and the models of the C-, E-, S-, CLS- and CL-Class to the comprehensive range of SUVs covering the GLK-, M-, GL-Class and G-Class.

The all-new 2014 Mercedes-Benz CLA 45 AMG will certainly be the most dynamic way to experience the new 4MATIC. The new compact mid-range coupe will be one of the most dynamic, powerful and efficient four-cylinder series-production compact cars. Look for the official launch in Europe next spring.