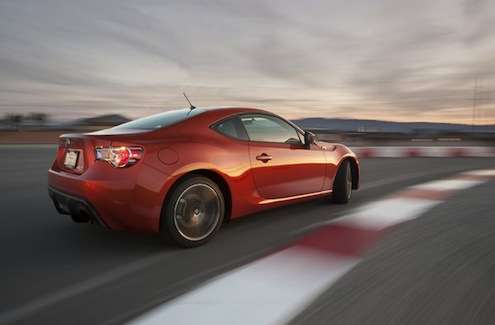 Toyota has announced that the 2013 Scion FR-S has won the first AutoGuide.com Car of the Year Award, but the website fails to recognize the major contribution from Subaru.
Advertisement

Toyota has announced that the 2013 Scion FR-S has been honored with the AutoGuide.com Car of the year award. This is the consumer resource website’s first Car of the Year Award and it’s been given to the new 2013 FR-S two-door sports coupe. Even though the Scion FR-S was jointly developed with the Subaru BRZ, they only give the award to the Toyota brand. While the honor is well-deserved, they fail to recognize the all-new Subaru BRZ.

Toyota says the judges evaluated against their competitors, new class benchmarks set and their importance to the automaker, consumers and industry. The automotive website described the FR-S as “driving bliss,” and called out the "sport car’s agility and balance, in addition to its driver responsiveness." All these things are very true but could also be said about the new 2013 Subaru BRZ, but AutoGuide fails to see the importance of Subaru’s contribution to the joint effort. They even downplay their part in the project.

What about the Subaru BRZ?

The website mentions the Subaru BRZ and asks the question, “what about the Subaru BRZ?” They say that the “Subie” shouldn’t get any of the praise because Toyota funded the project, had the vision to create the car, and carried the project through. They went on to say that Subaru would have never built the car if it was left up to them.

What the AutoGuide.com judges fail to realize, is that Toyota needed Subaru, and they couldn’t have built the joint BRZ/FR-S/GT 86 without their competitiors help. Akio Toyoda wanted to build an affordable sports car and that is where they needed Subaru. Without Subaru's boxer engine technology, the new Toyota sports car would have an MSRP that would be thousands more. Where does AutoGuide.com think the agility, balance and “driving bliss” of the FR-S comes from? It’s because of the low center of gravity and low position of the engine that gives the front-drive sports car its sporty handling characteristics.

The fact is, Toyota couldn’t have built an affordable Scion FR-S without the Subaru engine technology. AutoGuide.com judges called the FR-S a “democratization of fun” for its affordability and accessibility. What they fail to realize, is that the affordability and accessibility would not be possible without the major contribution from Subaru. The BRZ, Scion FR-S and Toyota GT 86 are even produced by Fuji Heavy Industries who is the parent company of Subaru, at its Gunma factory near Tokyo.

Akio Toyoda needs to get the credit for being smart enough to recognize that he couldn’t build an affordable sports car of a generation without the help from Subaru. AutoGuide needs to be smart enough to give their first-ever Car of the year award jointly to the 2013 Scion FR-S and Subaru BRZ.

Anonymous wrote on December 19, 2012 - 8:22pm Permalink
Thank you for defending Subaru Denis :]
3Deuce27 wrote on December 20, 2012 - 1:00pm Permalink
And Toyota is remiss in not acknowledging Subaru's contribution. On principle, Toyota should have refused to acknowledge the award until it was awarded to both companies. Makes me want buy the Subie/FRZ over the FRS.
Kymbo wrote on January 7, 2013 - 11:04am Permalink
Just like to add that Toyota owns a 16% share in Fuji Heavy Industries thus partially owning (and controlling as a major share holder) Subaru. Agreed that praise should be shared though.
Anonymous wrote on January 7, 2013 - 12:30pm Permalink
"Front drive sports car"? It's rear drive.