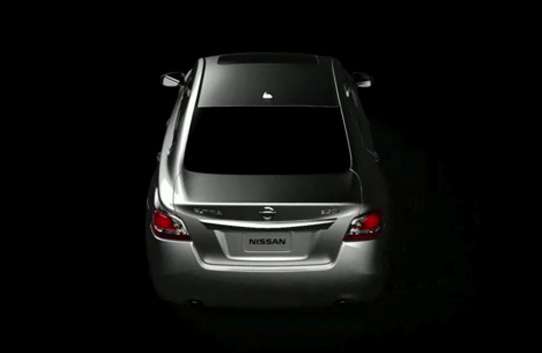 Nissan is keeping the momentum going with the fifth teaser video of the 2013 Altima, and the car is now set for its debut at the 2012 New York Auto Show.
Advertisement

With the New York Auto Show only days away, the anticipation is building as many carmakers will unveil some of their new cars. The 2013 Nissan Altima is about to make its debut in New York and the company is giving us a steady run of teasers in advance of the event.

With the fifth teaser video, Nissan continues to reveal more details by giving us a look at the whole car, although it’s just a quick look and of course leaves us wanting to see more. This fifth video is more than we’ve had up until now. The fourth video was just a few seconds showing us a side view only.

The third teaser from Nissan gave us a peak from the rear end of the 2013 Altima showing the new taillight design. The second showed off the top of the front end of the car revealing a headlight turned on and just enough of the grille to peak our interest. It most closely resembles the "upside-down trapezoid" grille of the new Versa sedan in stretching toward the headlights.

And the first teaser video gave a pretty clear shot from the top of the new sedan. Although the exact styling of the 2013 Altima was unknown until now, much of its mechanical details have already been revealed. Powertrain choices for the 2013 Nissan Altima will start with a four-cylinder engine paired to a revised CVT (Continuously Variable Transmission). The all-new CVT is said to reduce friction by up to 40-percent compared to the current unit which will help increase fuel mileage.

It doesn’t look like Nissan will offer a six-speed manual transmission on the new Altima sedan; for the 2012 model, the manual transmission was standard equipment with the four- and six-cylinder engines but unavailable on sedans. We could see Nissan bring out an Altima Hybrid for the 2014 model year that will paired with a supercharged 2.5-liter four-cylinder engine with a compact electric motor integrated with the CVT.

The 2014 would be a mild hybrid version and couldn’t be operated on battery power alone. Nissan reports that the new Altima Hybrid would return V-6 levels of performance with fuel economy up to 40 mpg highway.

It's not all that easy to pick out meaningful details with the new teaser #5 video, but that is Nissan’s strategy all along. Like the 2002 Altima that first got the car noticed in the midsize sedan segment, the 2013 Altima will feature bold-for-the-segment styling.

Take a look at all five of the videos below.