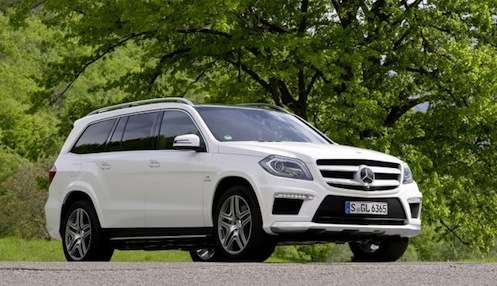 Mercedes-Benz has released details on the new GL63 AMG high-performance SUV that will be arriving in the U.S.
Advertisement

The new 2013 Mercedes-Benz GL63 AMG will be coming to the U.S. in early 2013 and the German company has just released details on the high-performance SUV. Although it has been known for many month’s that Mercedes was planning the potent luxury SUV, today the full slate of details was announced. Up until now, there has not been an AMG version of the luxury Mercedes-Benz GL-Class, but that all changes with the new 2013 GL63 AMG.

The 2013 GL63 gets visual AMG treatments

It starts on the outside with the usual treatment of AMG styling enhancements that we are accustomed to. The AMG styling features large air intakes in the front upper and lower valance for more effective cooling of the V-8. LED daytime running lamps have been incorporated into the outer air intakes. The larger fender flares are need to accommodate the large 21-inch AMG alloy wheels wrapped in 295/40 R performance tires that adds almost one inch to either side of the high-performance SUV. Special "V8 BITURBO" badges are placed on the fenders and two chromed twin exhaust pipes of the AMG sports exhaust system tell of the power that is underneath.

The AMG V-8 twin-turbo engine delivers the kind of performance that is expected from AMG. The 5.5-liter V-8 produces 550 horsepower and 560 lb-ft of torque to get the luxury SUV moving. The GL63 AMG accelerates from 0-60 mph in 4.9 seconds, while the top speed stands at 155 mph (electronically limited).   The AMG V-8 is equipped with the latest engine technology that includes spray-guided gasoline direct injection, piezo injectors, bi-turbocharging, air-water intercooler, a fully aluminum crankcase, four-valve technology with variable camshafts and alternator management.

The 2013 GL63 AMG comes with permanent all-wheel-drive and the power is transferred to the wheels via the AMG SPEEDSHIFT 7-Speed automatic transmission. The high-performance AMG comes with the fuel-saving ECO stop/start function that switches off the eight-cylinder engine as soon as the vehicle comes to a standstill.

Underneath, the 2013 GL63 AMG gets a sport suspension with an AIRMATIC package, consisting of air suspension, special struts, automatic self-leveling function and Adaptive Damping System (ADS). The ACTIVE CURVE SYSTEM incorporates active anti-roll bars on the front and rear axles that help reduce body-roll under severe cornering and provides stability at high speeds. Two suspension modes "Comfort" and "Sport" are offered and the air suspension system is speed sensitive and lowers the body at higher speeds to minimize drag, while increasing stability. The AMG high-performance brakes help bring the large SUV safely to a stop.

The interior is luxurious with premium leather AMG sport seats that are electrically adjustable and feature double stitching in a contrasting color, as well as AMG badges in the backrests of the front seats and the outer rear seats. The dashboard, armrests and door trim are finished in MB-Tex with double stitching.

The four-spoke sport AMG steering wheel features perforated leather grips, a flattened bottom and aluminum shift paddles for spirited driving situations. The AMG instrument cluster has four distinct dials to relay all the necessary information to the driver. Positioned in the center is a color TFT monitor, which incorporates an AMG logo and the AMG main menu.

Pricing will be announced closer to next year’s launch of the 2013 Mercedes-Benz GL63 AMG, but expect the high-performance SUV to be well over $100,000.