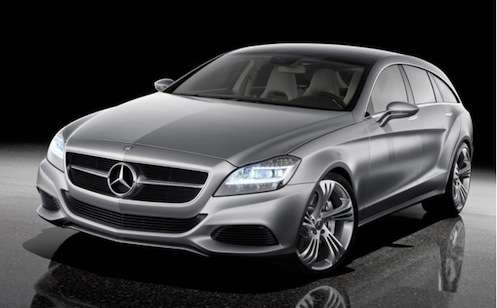 Yesterday, we reported that Mercedes-Benz had officially announced complete details on the 2013 CLS Shooting Brake. Now information has been leaked on the high-performance CLS63 AMG Shooting Brake from Autovisie before the car’s expected debut at the 2012 Paris Auto Show later this year. The images leaked by the Dutch magazine look very similar to the concept version pictured here that was first revealed at the Auto China Show 2010.

Like the tamer 2013 CLS Shooting Brake version, Mercedes won’t be bringing the 2013 CLS63 AMG variant to U.S. shores anytime soon. Sadly, the German automaker knows that Americans have been slow to embrace the wagon. Even though the 2013 Shooting Brake is a great automobile that offers both sport and function in one package, Mercedes knows it won’t sell in the U.S. That’s too bad for us because the 2013 CLS63 AMG will be an incredible automobile.

The all-new CLS63 AMG will come with the same powerplant as the CLS63 AMG four-door coupe. It will get AMG’s latest twin-turbocharged 5.5-liter V-8 pumping out 525 horsepower and 516 pound-feet of torque. The sporty wagon will have rear-wheel-drive configuration just like its four-door coupe stablemate. If that isn’t enough power, an optional Performance Package will be available which will increase output to 550 horsepower and 590 lb. ft. of torque. This will be one incredible grocery hauling wagon.

The new AMG Shooting Brake should have similar performance numbers as the four-door coupe. The coupe will go from 0-60 mph in a very quick 4 seconds with a limited top speed of 155 mph. That will get mom and the kids to soccer practice in lightning speed. The stylish new wagon will have the kind of performance that is expected to come out of AMG.

The powerful V-8 will be mated to an AMG SPEEDSHIFT seven-speed automatic with three modes to choose from including sport (S), manual (M) and controlled efficiency (C). The engine will have a new stop-start feature to save fuel during stops at a traffic light. Automatic rev-matching and a RACE START launch control function is also expected to be included in the AMG wagon variant.

The AMG wagon will be a fun car to drive and will also get the latest version of the AMG Adaptive Suspension damping system, as well as a custom front axle arrangement and AMG-specific electro-hydraulic steering.

The all-new CLS63 AMG will be very similar to the standard CLS Shooting Brake from the windshield back. The sport wagon will feature extra legroom and up to 54.7 cubic feet of cargo room with the rear seats folded down in the back. You can get full details on the interior appointments on the 2013 CLS Shooting Brake by clicking here.

Sales on the new 2013 Mercedes-Benz CLS63 AMG Shooting Brake will start in Europe this November, with both versions expected to make simultaneous showroom appearances. It’s a shame this super wagon won’t be making it to U.S. shores.