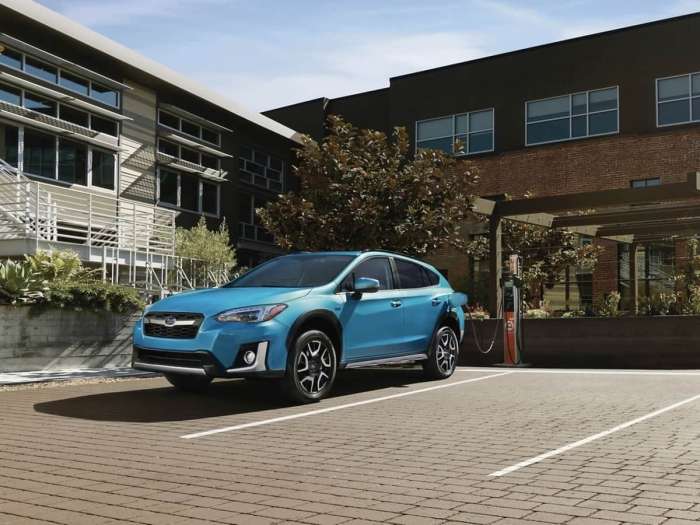 Subaru’s first-ever Crosstrek plug-in hybrid makes its debut at the LA Auto Show. There are two reasons why it offers less MPGe and EV range than other brands.
Advertisement

True to the Subaru brand’s core value of all-wheel-drive, the Japanese automaker’s first-ever plug-in hybrid will stay true to its heritage. They could have built their first PHEV on a two-wheel-drive platform and achieved more MPGe and EV range but chose to build in on the rugged Crosstrek platform. They did sacrifice some fuel-efficiency, but it wouldn’t have been a real Subaru without its “go-anywhere” attitude.

All-wheel-drive is a core value for Subaru

Even with less horsepower and more weight from the PHEV hardware, with the Crosstrek gas-electric combination, the acceleration and power should be significantly quicker than the standard model. The 148-hp setup achieves an electric-only driving range of 17 miles and speeds up to 65 mph in full electric mode. That is good for a fuel economy rating of 90 MPGe. This is less than plug-in hybrids from other mainstream brands, but Subaru chose to offer it an all-wheel-drive package offering all-weather, all-terrain capability.

For comparison, the Chevrolet Volt gets an EPA rated 53 miles of electric range and 106 MPGe, the Kia Niro PHEV gets 26 miles and 105 MPGe. But the Volt and Niro, along with most other mainstream non-luxury plug-in hybrids, don’t offer all-wheel drive. The larger Mitsubishi Outlander PHEV features an all-wheel-drive system and comes with more electric-only range than the Crosstrek (EPA-rated 22 miles) but lower efficiency (74 MPGe).

The 2019 Subaru Crosstrek plug-in-hybrid offers real all-wheel capability in a hybrid package, and it embodies the company’s environmental vision and their vision to be the overall safety leader. It also comes standard with EyeSight driver assist, so it will be the safest small PHEV SUV for consumers.

The all-new first-ever Subaru Plug-in Hybrid wouldn’t have been a real Subaru without being built on a rugged platform with all-wheel-drive, all-terrain capability. It will also be the safest small SUV PHEV for consumers. The Japanese automaker sacrificed MPGe and all-electric range in their first-ever 2019 Subaru Crosstrek plug-in hybrid to stay true to their core values.

SubaStar wrote on November 22, 2018 - 5:09pm Permalink
Good boy Subaru, you didn't kill your heart: boxer mill + SAWD. Now, let's check how it works on daily use and see if reliability will be as good as it should be.