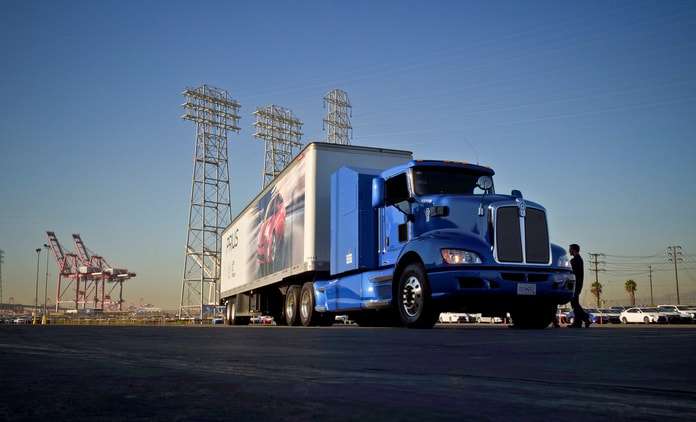 Much has been said about Tesla's EV mystery truck. Meanwhile, zero-emission prototype Toyota trucks are hard at work in America.
Advertisement

Tesla has made quite a stir with its never demonstrated EV truck. Tesla had planned a media event at which its EV truck would be demonstrated, but, like all Tesla deadlines, this one will be missed according to the company. Meanwhile, Toyota is running fuel cell electric trucks at the port of Long Beach in California. Real trucks. That haul real freight.

Let's face it; hydrogen fuel cell technology for mainstream passenger cars is going nowhere. Toyota pulled its Mirai last year due to lack of available fueling stations and creating a network of hydrogen stations nationwide is not going to happen in this generation. However, almost all of the fueling issues related to cars, or trucks for that matter, are eliminated in ports where setting up a hydrogen station to serve the captive trucks used to haul freight would be cost-effective and relatively easy to do.

Toyota's HFC EV truck has now completed 4,000 development miles. The trucks have pulled "drayage rated cargo weight" according to Toyota and in about a week will begin making runs from two California ports to local warehouse and distribution centers. The trucks emit only water vapor.

Called Project Portal, Toyota's heavy-duty truck generates over 670 horsepower and 1,325 pound feet of torque. The design is intended to support class 8 load operations. The Truck's combined weight capacity is 80,000 lbs. Not sure exactly what these specs meant, we reached out to Torque News alumnus, Aaron Turpen, who told us it means "A fully-loaded semi trailer." The Toyota EV truck's estimated driving range is more than 200 miles per fill, under normal drayage operation. (Drayage means part of a longer overall move, such as from a ship to a warehouse.)

Trucks like these, operating near dense urban areas, generate significant emissions and pollution. Toyota's trucks are intended to eliminate the diesel emissions generated by today's trucks. Toyota says that as the study progresses, longer haul routes will be introduced.

Cody wrote on October 13, 2017 - 5:39pm Permalink
Article is incorrect. Toyota has not pulled plug on Mirai. They are readily available
John Goreham wrote on October 14, 2017 - 11:10am Permalink
Thank you for the correction Cody. Toyota did pull the Mirai from sale last year as the link explains. It is now available to select customers in California. Toyota has provided less than 200 per month since its introduction. There are no fueling stations in key markets that adopted CARB mandates, such as in New England. Thus, it is not for sale (or lease) there or in other states. CNET reports there were 28 fueling stations in California as of July.
Cody Carter wrote on October 14, 2017 - 11:15am Permalink
So youre saying they pulled it but they didn’t? Haha. Toyota sold ~750 first year and are aimed to sell ~ 2,000 this year. So no they didn’t pull them from sale. There are 8 Mirai Dealers in CA and are readily available.
John Goreham wrote on October 16, 2017 - 3:08pm Permalink
Draw your own conclusions. Toyota has over 1,200 dealers in the U.S. As you say, 28 sell the Mirai, but it is "readily available." I wish the automakers much luck with fuel cell vehicles, but they won't be part of the American mainstream for 20 years, if ever.
Mark Day wrote on October 14, 2017 - 6:33pm Permalink
In the US the Mirai is currently only for sale in California. And, sadly, it is not given away anywhere:-).