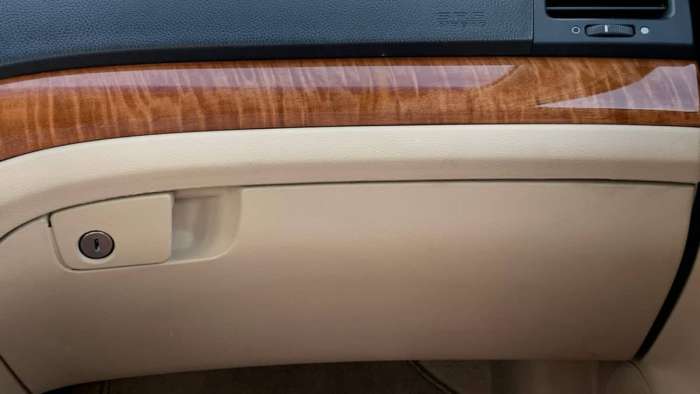 Is the glove box of your Honda Accord or Acura TSX stuck shut? Here are some solutions for you.
Advertisement

Acura and Honda are well-known for their durability and reliability - for the most part. We don't just review Honda and Acura products here at Torque News, we also own them. So when we become aware of a common issue, we like to highlight the fix so that fellow owners can enjoy their vehicles again. One common issue with Honda and Acura vehicles, particularly Accord and TSX cars, is a glove box that is stuck shut and won't open.

Acura Honda Glove Box Stuck Shut - Don't Give Up - Here's Why
If your car is one of the many with the common glove box stuck shut problem, you are looking for a solution. And with good reason. The cabin air filter is behind that glove box door, so quitting on it, even if you have removed your valuables, is not a good option.

Acura Honda Glove Box Stuck Shut - Force Won't Help
Using more force won't help open the stuck glove box on a Honda Accord or Acura TSX. The reason is that the latch itself is free to move. It is the inside of the assembly that is stuck, not the little tab you pull on with your fingers to open the box.

Solution One - Temporary
If you just want access once in a while and will live with the glove box being unavailable to you in normal use, you can save some money. The video above shows how you can use a small screwdriver to unlock the box and get it open. However, this solution does not solve the underlying issue. It just gets it open one time. Close it, and then you are still back to a stuck glove box.

Solution 2 - Permanent, But Ugly
One savvy owner found a solution that does work repeatedly. He rigged up a string to open the box. However, it looks bad to our eyes. Our second video highlights that fix.

Solution 3 - The Remedy
We wish we could say that there was a perfect simple fix with no money involved, but that has not been the case in our family. We are batting 1,000 with both of the glove compartments in our Acura TSX and Honda Accord cars being stuck shut. We are off to the local body shop for an affordable replacement.

If you have found a better solution to this common issue, please tell us in the comments below.

Jane g. wrote on December 17, 2019 - 7:35pm Permalink
Good article. We find it odd that such pricey and dependable cars have this quirky, aggravating defect with the glovebox.
Jeffrey Irving wrote on January 30, 2021 - 9:24pm Permalink
Went to change my cabin air filter on my 2018 Honda Accord 1.5 Sport . Disconnected the Dampening arm first , Gently pushing in on both sides of the glove Compartment sides simultaneously until the front of my glove box dropped open allowing me accuse to my 2018 's cabin filter . Changed filter like I've done many times before without any problems what so ever. . After changing the cabin filter , I re-attached the dampening arm , gently and simultaneously pushing into both sides of the glove compartment sides until they were locked into place. Re-connected to dampening glove box arm , and when I tried to close the glove box door it wouldn't close ! So I re-checked my work several times to make absolutely sure that it wasn't something I could have missed , and found that I had done everything correctly ! didn't miss anything and I still cannot get my glove box door to close, It simply will not close. HELP ! ! !
Jessica Mejia wrote on March 11, 2021 - 9:30pm Permalink
Did you figure it out? I did the same thing and cannot get it to close.
Steve Jasik wrote on May 22, 2021 - 2:54pm Permalink
May 2021 While Honda power trains are pretty good, there is a bunch of mis design in some of the interior parts. The screws in the trunk latch are 3 mm and both of them have broken on me in my 2006 Accord. The glove box is a master class in bads design. Had they put the lock mechanism below the latch the mechanism would have been simpler, lighter and cheaper. As it is the list price of a replacement glove box is around $484. While used ones can be had for around $80 on eBay there is no excuse for the complex design. Pulling on the lock tab actuates a lever that connects to a wire on the center mounted latch which causes the GB to open.As I don't know what the mechanism looks like when new I can tell you that the addition of a spacer to the lever mechanism fixed the problem. Let me also add that taking the GB apart to access the mechanism and then gluing it back together was a royal PITA that can only correctly be done in the Honda factory so I do not advise anyone without a serious fixit shop to attempt such a task. Some day I may get around to documenting what the internals of the mechanism look like as I have taken sufficient pictures. Want more info, Google my name.
Joe wrote on August 2, 2022 - 1:28pm Permalink
Solution 1 worked for my 2012 Acura MDX. Wasn't a permanent fix but it help me open the box and empty it. I couldn't install the zip tie on the bar from Solution 2 but I believe it would have worked if I was more patient.