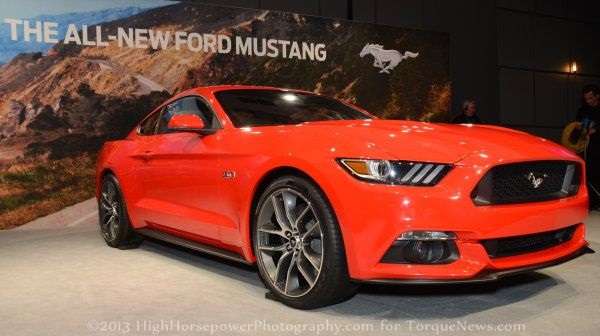 The all-new 2015 Mustang is everything Ford fans could have hoped for. The new slightly smaller, more refined Mustang may just give Ford the car it needs to reach up to the premium sports coupe market. But does Ford have a dealer network that can handle that assignment?
Advertisement

Today Ford revealed the gorgeous new 2014 Mustang. Our editor, Patrick Rall was there in person and he contributed facts and opinions to this story. I asked him to tell us if he thought the new Mustang was more refined inside and out and if he thought it might lure some Lexus RS 350 sport coupe buyers or BMW shoppers. Rall says the new Mustang does appear more refined and he even invoked the BMW 6 series. Whoa. He skipped right over the 4-series. Let’s break this topic down and compare and contrast the new Lexus RC 350, BMW 4-Series and the 2015 Ford Mustang.

Although I am pretty good with numbers I had to look up the Mustang’s sales figures. I was surprised. In November Ford sold about 5,300. That is its running average. For a 2-door sports coupe that is impressive. Only the Chevy Camaro and BMW 3-Series have enjoyed that kind of volume lately. That is, until the new Lexus IS 350 and IS 250 appeared and put up over 4,000 units sold for three months running. Yes, we know that the Lexus IS 350 model has 4-doors, but wait. Lexus has introduced a new 2-door, rear-drive, powerful, sports coupe called the RC 350. The new RC will have dimensions almost exactly matching the brand new 2014 BMW 4-series, it’s actually a little wider and longer. Although we don’t have confirmation of the exact length and width of the 2015 Mustang, it appears that the BMW 4-Series, Lexus RC 350, and the Mustang are all nearly identical. The Camaro of course is still super-sized.

Dimensions are not the only similar trait the 2015 Ford Mustang, BMW 4-series, and the Lexus RC 350 will have when all the cars are available for sale. The Mustang has a powerful V6 Engine that can develop over 300 HP as does the Lexus (314) and BMW (300). All three cars are also rear-drive and can come with paddle shifting automatic transmissions. All three can also drop in monster V8s if they so choose. The obvious difference between the Lexus and BMW, versus the new Ford, is luxury appointments, driving refinement, and the overall ownership experience. However, I drove the new 2014 IS 350, the current BMW 335i, and also multiple versions of the Mustang over the past 6 months, on and off track. The truth is, all these cars are not exactly what their reputations and stereotypes would lead one to believe. The Mustangs I drove could either be cheap feeling, or it could feel amazing. It totally depended on which drivetrain and which interior the car had. Trust me, Ford can definitely get within reach of the interior and driving refinement of BMW and Lexus. It could with the last generation, 2013 Mustang if it chose to. This new car might come that way in many versions.

I no longer buy the old brand loyalty and demographic roles the auto enthusiast world carved out for these cars a decade ago. The new Lexus IS 350 F Sport is amazing on and off track. It surprises. The BMW 335i is a fantastic car, but it is coasting on reputation now with regards to being “the ultimate driving machine” and its prices have ballooned past reasonable. I’m biased towards Lexus, that is not something I hide. However, go read any comparison involving the BMW in Car and Driver, Road and Track, or whatever publication you trust. Those publications are all saying the same thing about the BMW. And those writers own BMW 3 series cars.

The new Mustang could start to draw interest from shoppers considering a BMW and possibly also Lexus. The new Mustang is certainly capable. The only thing missing is a premium dealership and ownership experience. I wish I could tell you Ford has a plan for that, but Lincoln Motor Company is not the plan. It is about to go the way of Oldsmobile, Pontiac, and Mercury. What an odd situation. Ford finally evolves its cars to a world class standard of excellence and it has no place to sell such a car to those who have come to expect much more than just a great car.

For complete coverage of the new 2015 Ford Mustang please see our Ford page.