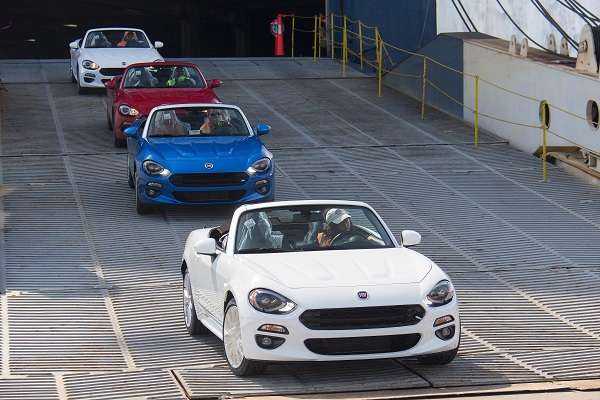 Why Isn't the Fiat 124 Spider Selling Well In the US and Will It Turn Around?

The Fiat 124 Spider's sales are not where they should be. We examine the possible reasons.
Advertisement

If you think this story is intended as hit-piece on the Fiat 124 Spider, consider that its author is the founder of the Fiat 124 Spider Club. Also, if you think that there is no problem and that it is just the U.S. where sales are low, consider that Fiat sold 21 Spiders in February in Canada and that the Miata has been outselling the 124 Spider by 2 to 1 on the Spider's home turf in Europe.

One might think that winter is a terrible time for convertible sales, and there is sound logic to that thinking, but in the U.S., Mazda Miata sold 2,037 in January and February of 2017. Up 54% over the same period a year ago. Fiat sold just 542 Spiders in those two months. With the better looks, higher power, and similar prices, why did the Fiat's sales come in so far under Mazda's? Our first guess was "production limitations." Normally, automakers are quite happy to use this as an excuse for low sales. Tesla has made it an art. We reached out to some of our industry contacts at both Mazda and FCA US and could not get anyone to tell us Fiat's sales were limited in any way by Mazda's production schedule or Fiat's orders being limited. Nor could we find any indication of that in the press releases and other available information on the subject.

When the facts don't answer a question anecdotal evidence is sometimes helpful. We looked hard at the Fiat 124 Spider Club member notes for hints on this subject. We find mostly good news. The membership is very active, an aftermarket community selling bits for 124 Spiders is emerging and there are clubs making gatherings possible. On the other side of the coin, we read a comment by a member we will call SMT posted last week who said "So here I am with my husband in Italy. Twelve days, in Rome, Sorrento, Florence Perugia and a nice drive along the Amalfi Coast. I have not seen a single 124 on the roadways. What's going on? The weather has been nice." Where are the Spiders?

So just how are sales in Europe? Surely the 124 Spider is doing better there. It is hard to prove that, though. For one, the market should be larger than the U.S. market, given Fiat's significantly larger footprint of dealerships compared to the U.S. The 125 Spider's legacy is also much stronger there than in America. Fiats have always been rare here, but in Italy they are common. From June to the end of 2016 Fiat sold 3,685 Spiders in Europe. By comparison, Mazda sold 7,224 Miatas in that period in that same market. (More on page 2)

A recent story by Steven Lang at The Drive asking if Fiat is a failing brand in the U.S. raised some hackles at the Facebook Fiat 124 Club. That shows a fanbase that is healthy, willing to defend its favorite car, and that wants to see the Fiat brand and the 124 succeed. But Steven is no hack. He has written for many of the largest publications and has decades of real-world automotive sales management under his belt. In fact, he singled out the 124 Spider as a bright spot among Fiat USA overall, and predicts it could survive as an Alfa model (which it was once considered for if my recollection is correct).

Did Fiat drop the ball with regard to the 124 Spider in its promotions? As part of the link in that chain, I have to say definitively "No." FCA employs the top promotional people in the business to work with the media to get the 124 Spider's message out. Some other major brands have simply eliminated those jobs. In our relatively small New England Press fleet a Spider made the rounds and I read every story I could find on it. Without exception, the car was praised (despite being an automatic). Mazda brought two Spiders to the International Motor Press' Test days in New York last year, and remarkably, put the Abarth convertible on the track for testing. I drove it and my report was published as were many other stories about that car on that track. A quick read may dispel any doubts about my being a fan of this car.

There is no direct evidence that Mazda is limiting the sales of the 124 Spider and tiny Mazda is crushing it with Miata sales. The Miata frequently outsells not just the Boxter/Cayman, bet every Porsche model in the U.S. market. This despite the ND MX-5 having less power than the outgoing model, and for its first year of sales having no hardtop version.

Something is amiss with the Fiat sales model. We don't blame the car. We don't blame the folks at Mazda, and we certainly don't blame any lack of fan and owner enthusiasm. What does that leave as a cause for a car that seems to be selling at about half its potential in the USA, Canada, and isn't exactly making headlines in Europe for its sales numbers?