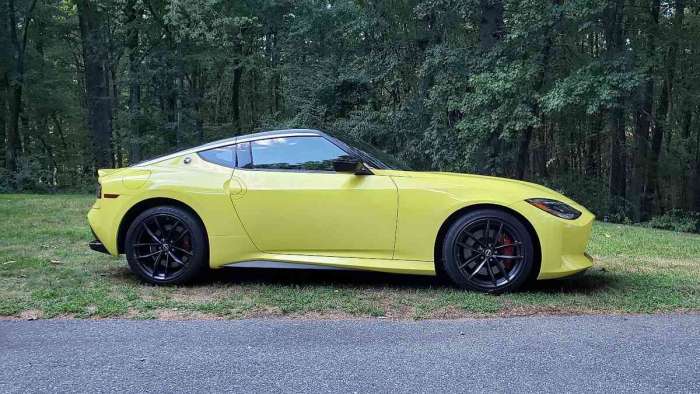 Why the 2023 Nissan Z Makes a Perfect Last Gas Car

We overview why you may want the Nissan Z to be your last gasser in a motoring age shifting to electric vehicles.
Advertisement

With California’s announcement that gassers are out in 12 years, we began thinking that at some point each of us who lives long enough, will buy our last gas car. While there is certainly no limit to what may be the perfect last gasser, the Nissan Z definitely deserves consideration.

Sports cars like the Nissan Z are luxury items, not necessities. If you need a daily driver for family use, Nissan has a long list of better vehicles. First among them is the just-about-to-land Nissan Arriya battery-electric vehicle. If you need a city car, you cannot do better than a proven new or used Nissan Leaf. As you can see, our thinking is already shifting away from gas models and towards electric models from our favorite brands.

The new Z continues Nissan’s rich heritage of creating great sports cars. Nissan likes to say the Z is built for enthusiasts by enthusiasts. It shows. Every part of the new Z is clearly designed for those who want to enjoy a car on the best public roadways and private racetracks. From the car's look to its driving experience, the Z is excitement on wheels.

We have had the distinct pleasure of driving the outgoing Nissan Z on the racecourse at the Monticello Motor Club numerous times. The Z makes a great grand touring car on public roads, but it is the possibility of a racetrack day that really makes the car special. For this new generation, Nissan added more capability. 0-60 MPH comes 15 percent sooner, and the Z can turn with up to 13 percent more Gs before it slides from one side of the track to the other.

The basic formula of a rear-wheel drive platform and a stout powertrain have not changed. Nissan is back to a turbocharged engine for 2023. This one breaks the 400 hp barrier and has its peak torque of 350 ft-lbs at just 1,600 RPMs. The six-speed remains, and if you prefer an automatic, a nine-speed is also available with paddles just like those found in the GT-R.

We had a chance to drive the new Z on some of New England’s legendary twisty country roads. The Z shines when given room to run. From the precise steering to the perfect brake feel, Nissan has tuned the new Z to be perfect for spirited driving. And yes, the power is really fantastic.

Somehow Nissan managed to make a car with analog gauge pods that point at the drive make sense with a modern infotainment system. It is the many little ways that this car seems both modern and timeless that make us think it may be well-suited as a keeper when the days of gas engines are over. The new Nissan Z ranges in price from the low $40Ks to just under $60K. We can’t think of a better car to be one’s last gasser. Except, of course, if Nissan adds a convertible to the lineup.