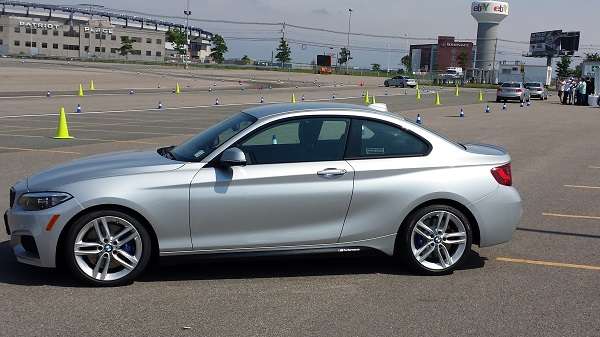 We thought the BMW brand had given up its heritage completely. We were wrong.
Advertisement

The new 2014 BMW 228i reminded me this week of what the brand used to represent. You may have a different memory of the BMWs of the past, but pretty much all the major car magazines, and many BMW owners, feel that the current 3 and 4 Series has strayed too far from the toss-able, amazing handling, smooth-running, and nearly-affordable compact sports sedans and coupes that BMW did better than any other car maker. We attended a BMW event this week and we have discovered where the real BMWs are hiding. They are now called 228is.

What is a BMW?
Don’t get us wrong, we sure like the new electric i3, and our review of it after driving was almost entirely positive. Our only contention is that it is not “a BMW.” Some disagree. Also, we respect the X3. We have spent a lot of wheel time in an X3 and each drive reminds us that the base X3 seems to have the ideal real-world ride in a medium sized family vehicle. It isn’t a sports sedan though, and the price is too high for most buyers who want luxuries like a back-up camera and maybe real leather. If you are a 1-percenter and think that the puffer-fish X6 and the $90,000 sedans are the real BMWs, good for you. What we found in the 228i was a car that nobody else really makes, and it reminded us of a BMW.

What is a BMW 228i?
The new 228i is of course the current name for the older 1-series, but with 2 doors. BMW now calls anything with 2 doors an even number car, and anything with 4 doors an odd name. Except when it doesn’t - like with the X4. Naming aside, the 2-series is a compact car that does not feel compact to the driver. It feels just right. Unlike the X1 I recently tested (and also the i3) the seat in the 228i did not feel too small for me. Maybe I just didn’t notice since the car felt so great overall. The materials of the mid-$30K coupe I drove were fine. Leather, or similar where it should be, the corporate dash, which is as good as any other premium car make, and fantastic looks outside.

In back, rear passengers are in a tomb if they can even get back there. Using the passenger seat to allow access is a hassle. That is all good if you ask me. It offers less temptation to make this a work-a-day car. Keep it special and just for you, or you and a significant other.

2014 BMW 228i Is What a BMW Should Be - 335i Is Not
I could go on and on about how this car has the solid feel, great handling, amazing braking, and powerful pull one deserves in a sports sedan. I could say it is rear-drive, which is the way it is supposed to be in anything with the word “sport” in the name. Hopefully you already knew that. What I will say that I have not read many places, is that the 228i is a much more fun car to toss around a racetrack than the 335i. I’ve done autocross courses in both, and seen pro drivers do it in both. The 335i is too big and heavy, too powerful, it understeers too much, is not as toss-able, does not feel better from the driver’s seat, and costs about $15K more similarly equipped. I don’t care that it has a turbo in-line six. I don’t care that the 228i has a turbocharged four. BMW ruined the smoothness and premium feel of all its engines about 5 years ago with turbo-lag and the awful stop-start system. It wasn’t their fault. The government mandated that extra one or two MPG, so we all have to wear the hair shirt. We need to get over it.

BMW Competition
BMW’s 3-sereis and 4-sereis now have serious competition from the Lexus IS 350, the Lexus RC 350, the Cadillac ATS series, and Mercedes Benz’ C-Class offerings. Mazda and Mercedes’ front-drive CLA is nipping at the heels of the BMWs from the bottom of the BMW range, and Lexus' RC-F has pushed BMW to create ridiculous race-cars for the street that nobody needs. However, the 228i, with its mid-$30K price range and old-BMW feel may just be the model that makes that all OK.

Photography by the author.

Joe wrote on June 19, 2014 - 10:18pm Permalink
I disagree. The new M3 and M4, and M6 are real BMWS. Have you guys test drove the new M twins?
John Goreham wrote on June 20, 2014 - 8:49am Permalink
Those are amazing cars. My contention is that the "real BMWs" were almost affordable sports sedans (and coupes). Saw an M4 for the first time at a BMW event this week. Automatic Transmission. I took photos for a "what's missing form this M4" story.
Joe wrote on June 20, 2014 - 12:45pm Permalink
Cool. Let us know what you think about the new M3/4 if you test drive it
John Goreham wrote on September 23, 2014 - 2:14pm Permalink
Here you go Joe: http://www.torquenews.com/1083/2015-lexus-rc-f-vs-bmw-m3-which-your-better-track-car
Rick Dee wrote on July 2, 2014 - 9:16am Permalink
"BMW’s 3-sereis and 4-sereis now have serious competition from the Lexus IS 350, the Lexus RC 350, the Cadillac ATS series, and Mercedes Benz’ C-Class offerings. Mazda and Mercedes’ front-drive CLA is nipping at the heels of the BMWs..." Mazda ??
Dinkerson wrote on May 27, 2015 - 6:11pm Permalink
Really? Mazda? No.
George wrote on September 19, 2014 - 9:42am Permalink
Base models? nipping at the heels of the BMWs from the bottom of the BMW range??? What a ridiculous read. 335i too powerful and too big??? This was funny to read. I have a 2010 335i and X3 xDrive 35i. The X3 handles as well as the sedans and out-handles most sports cars I encounter on the road. This guy is discussing a BASE model X3, c'mon! If you want an affordable sports car that won't give you the grin from ear to ear like BMW, then buy a Honda or Toyota. BMW is about performance and handling. It is a driver's car, nothing more.
John Goreham wrote on September 23, 2014 - 2:20pm Permalink
I realize it sounds crazy, but I tracked the 228i M Spec again this week. BMW had a few folks on hand form the performance division. They tell me that yes, the 235i is a rocket, but that on-track the 228 is better balanced (almost exactly 50-50) and to many, more enjoyable. New story coming on the 228 on-track. - With regard to the comments about other brands moving upscale and meeting the BMWs coming down, if you ever have a chance drive a loaded Mazda3 2.5. Then drive a BMW 320 with the same MSRP. Or even an X1 28i. Looking at photos and reading specs and such doesn't work. The Mazda will be a big surprise. Audi has much more to worry about.