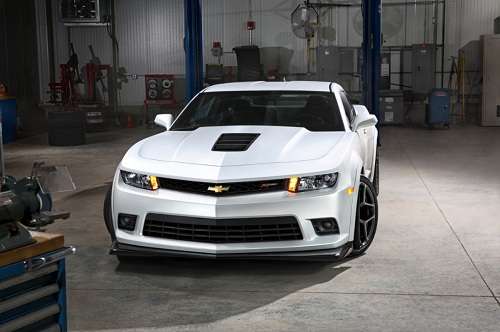 Chevy introduced the 2014 Camaro Z/28 yesterday. Will this track dominator become the ultimate Camaro, or will the ZL 1 remain the best ever?
Advertisement

With the new 2014 Camaro Z/28 introduced yesterday, the COPO Camaro, the track value package 1LE, enough convertibles to start its own cruise night, and the mighty ZL 1, one thing is for certain, this is the best time in history to be a Camaro fan. When the new Z/28 hit the podium yesterday in New York it threw down the challenge to the incredible ZL 1. Which is the ultimate Camaro for both road and track? We know the answer because we are writing the tale, but we will give you this surprise now. The deciding factor won’t be the engine.

Before we begin we should explain something in case there are any readers out there who think since all Camaros look alike they all act alike. At a track day this year we were able to sample the Camaro SS and the ZL 1 back to back. From 20 feet they look so similar we didn’t know which one we were approaching. However, just as the Batman Movie’s Catwoman Lee Meriwether looked pretty much like TV show Catwoman Julie Newmar, Camaros can look alike, but purr very differently.*

New 2014 Camaro Z/28
For me the new 2014 Z/28 brings back memories of Camaros everyone knew were the baddest pony cars in the land. The screaming chicken hood Trans Ams were for the gold chain guys in silk shirts with Bee Gees on the FM. The Mustang was off and on awesome or ridiculous during the ‘70s and ‘80s, but Chevy was always pretty smart with the Z/28 label. My recollection of the 1970s and 1980s is foggy, but the Z/28 was the ultimate Camaro. Yes, we did have the IROC-Z years, but those always seemed like caveman cars compared to the Z/28s that came before and after those years. Inelegant, and done more for style than with a performance purpose. The new Z/28 is back and Chevy this time tells us that its goal is to be the best track Z/28 ever. Setting aside the question of why anyone would start with a Camaro for their track day car, let’s give Chevy the benefit of the doubt, but take a close look at what makes the Z/28 special while comparing those elements to the standing champion of the Camaro world, the ZL 1.

Camaro Z/28 vs ZL 1 Drivetrains
The 2014 Z/28 has an incredible, normally aspirated engine. Displacing a full 7 liters, the LS7 engine produces a very respectable 500 horsepower. Jordan Lee, Small Block chief engineer and program manager explains why Chevy chose this engine, when it actually had a more powerful one it could have used saying “The LS7 is ideal for road racing because it delivers amazing performance in a compact, lightweight package. The broad torque curve and high redline of the LS7 mean fewer shifts are required for each lap, while the lightweight design improves the front-to-rear weight balance for better handling.” So Chevy didn’t pick the 580 horsepower engine in the ZL 1 (also found in Corvettes and Cadillac CTS-V cars) because it is a little heavier than the 80 horsepower less LS7 engine? The supercharged 6.2 liter LSA is a legend. The engine can produce wheel-spin during the 3-4 upshift on track when shifted at redline. The traction control has to be employed to keep the rear end from stepping out on the 1-2, 2-3 and 3-4 upshifts. Wait a minute, we just answered our own question! The 580 LSA engine is actually just a hair too much for this platform isn’t it? So why not use the less expensive, lighter, normally aspirated (less complex) LS7? We are going to call this one a tie. There is always a good reason to choose an added 80 horsepower, but there is a point where the car has all the power it can reasonably use on or off track. However, as a footnote to those who have not yet seen the full specifications on the new Z/28’s engine; It already has the cold air intake and K&N air filter. It already is CNC milled (blueprinted). Already has the high lift cam, the headers, and all that go-fast add-on stuff. So if you think that you’re going to buy this Z/28 and bolt on horsepower, you are likely mistaken. It’s done.

Both cars can have the same TREMEC 6-speed transmission, so it is hard to argue an advantage to either there. Both have limited slip differentials, one being clutch type and one helical gar type. Is one better than the other? Hard to say, maybe the edge goes to the Z/28 with the gear type. Drivetrain tie.

2014 Z/28 Brakes vs ZL 1 Brakes
The 2013 Camaro ZL 1 should come with a warning. It should say “Warning, your eyeballs may pop out under hard braking.” We’ve driven this monster on the track and it is able to stop so well with its Brembos that it is hard to conceive of a better stopping car this size and shape. Although our test was on track, we did not push the car to its limits. Those who have reported the brakes don’t fade during repeated hot laps. So how does one improve on that? Chevy did it by making the rotors from carbon ceramic. This drops the car’s weight by 28 pounds. Since Brembo is also the maker, and since the front rotors are almost an inch larger in diameter, we have to say the Z/28 is the leader here – on track. Both have brake cooling ducts and both use mono-block calipers with 6 pistons. It would seem the more expensive material may reduce fade during actual track races.

2014 Camaro Z/28 vs Camaro ZL 1 Handling
On road we are going to just stop the nonsense and give this category to the ZL 1. Its amazing magic magnetic (magnetorheological actually) shocks are able to adapt to both street and track use in a way that defies all logic. They can stiffen in corners and help reduce sway and yet, when the road is like most northern climate roads in the US, that is awful, they can provide a very nice, almost compliant, ride. Chevy went a little cuckoo with the Z/28 set up. Basically, they applied racing suspension components including spool valve shocks and stiff racing springs to the base car. They stiffened the chassis to support the added shock damping. We have not tested the car, nobody has yet, but it will not provide the same ride as the ZL 1 on road. On track the ZL 1 is simply amazing, so the Z/28 had better be equally amazing or what was the point? Cost may be the point. The carbon ceramic brakes had to be paid for somehow.

Interestingly, Chevy’s recent press release let the cat out of the bag on tires and rims. For many years Chevy has led the industry by putting oversized wheels on its cars. Big wheels add weight, slow the car down due to the flywheel affect, and reduce handling response. Alluding to this fact, and in comparison to the ZL 1, Chevy said “The Camaro Z/28 features 19-inch diameter wheels and tires, which reduce unsprung weight by 42 pounds (19 kilograms) per car compared to the 20-inch wheels standard on Camaro SS and ZL1. In addition, the smaller diameter wheels lower the center of gravity by 33 millimeters, further improving handling.” Guess what, they will also save money on the car, and on the tires when they get melted off at the track. Advantage? Tie. If this were about money we wouldn’t buy either of these two Camaros.

Chevy is one of the most generous manufactures of all when it comes to bringing cars to press events and sending out test cars. It won’t be long before there is a head to head comparison of these two on the track. Chevy claims the Z/28 is about track dominance. So we will concede it may be better there, but this is a street-legal car. It has one speaker – for the seatbelt chime. For dual use Chevy went too far for us to award the title to the Z/28. For both road and track use, our decision is the ZL 1 is the ultimate Camaro. Which would be your dream Camaro?

*We hope the readers will allow the historical reference since the Catwomen referred to were popular at the same time the original Z/28 was. Look up both and tell us if you get the point.