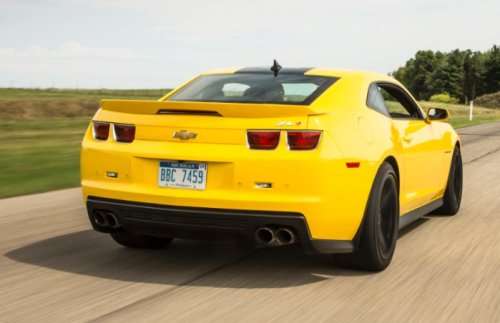 An unofficial review of the surprising Chevy Camaro ZL 1

An interesting first ride in the best Camaro ever built, and likely ever to be built.
Advertisement

Torque News had the chance to sample a ZL 1 Camaro this week at a motor press test event. We knew there would be a Camaro ZL1 to drive on both road and track and the first impression was very interesting. My co-driver and I were lucky enough to be walking up to the Chevy area when the “BumbleBee” yellow and black Camaro pulled up. Surprisingly, here was no waiting list as there is often is for the most exciting cars at such an event. I was very impressed with steering wheel and shifter knob covered in sueded microfiber. What a novel way to get folks to put two hands on the wheel. The six speed manual worked very well. I expected much more of a push back from the clutch and a heavy shifter, but these felt very workable. The engine sounded good, but frankly I wasn’t really that impressed. The back-burble wasn’t as loud as I had expected. Nonetheless, off I went.

At the first stop sign I had a left turn onto a 45 MPH roadway. I waited for a good traffic break and punched it in first ready to grab second and then third. However, the car was fast, but not the rocket I expected. Brakes and handling were good, but not great. I looked to my co-driver to tell me I was nuts, who didn't help and said “Cool, but not crazy.” We had a great ride and took the car back. I made a mental note to give the car a second chance on the track.

The next day karma was still working. Again we had a chance to get right into the ZL 1. But I noticed there were two. “Wow.” I thought, “Chevy rocks bringing two ZL1s out.” That was when the mystery was solved. The car we had driven the day before was actually not a ZL 1, but rather an SS. Now, the SS is a wonderful car, and any enthusiast would love one, but the difference between 426 hp in the SS and the 580 hp in the ZL 1 is pretty significant. This time the right car was chosen and we drove onto the track.

The Camaro ZL 1 can accelerate so powerfully that it seems to defy reason. It seemed as fast as the best car I have ever driven (the Audi A8 V10) and it made me wonder if the official 580 hp stated in the marketing materials is under-rated by Chevy. This being a Camaro, I didn’t trust the brakes or suspension in the first couple of corners, but after the first few hard stops and sudden turn-ins I realized that the ZL 1 is really an all-around supercar on par with the base Corvette. It stops as well as any muscle car or pony car ever built. The magnetic ride control is simply shocking in its ability to keep the car steady in turns. On about the fourth corner my co-driver and I looked at each other and noticed the perma-grin - That smile that cannot be removed from one’s face. My passenger mouthed the words “Holy-s.” You get the picture.

Up-shifting the Camaro from second to third results in tire bark as the car uses its traction control to keep the wheels from spinning. Speed-shifting from third to fourth at redline pushes you roughly back in your seat. Truly amazing. I didn’t look at the speedometer as I approached redline in fourth gear. All I can tell you is that the car is still pulling like crazy and the sound is as good as it gets.

Chevy is asking less than $60K for the ZL 1. If you are a Camaro fan and you want to buy a car that will likely hold its value better than the US Dollar, and bring you good karma, this is your chance. Go get one. Run.