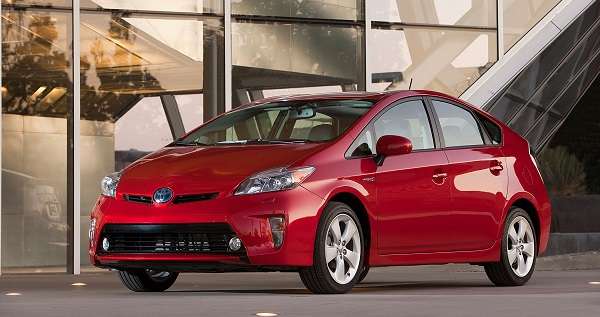 Which is safer 2015 Toyota Prius or Chevy Suburban?

The obvious answer may not be the right answer. Let’s look at some data.
Advertisement

We don’t mean to pick on the Chevrolet Suburban. The Suburban is a fine vehicle, and with its new redesign offers more space than practically anything else on the road for those with big families. This is a story meant to challenge what we think of is safe, but instead of using theoretical physics (big vehicle always wins), let’s look at some cold hard facts supplied by the Insurance Institute for Highway Safety (IIHS).

Driver Deaths per Million Vehicles
For about three decades, IIHS, NHTSA, and other agencies have been tallying up how many drivers die per million registered vehicles for each model in the US. The most recent report was released just this week. It covers the calendar years 2009-2012. The Prius model years 2010 and 2011 are covered in the report and the Chevy Suburban model years 2008-2011. During this period, drivers of Chevy Suburbans were about four times more likely to die in a crash than were Prius drivers. Surprised? How did we draw that conclusion?

The Facts
The Prius has had 16 deaths per million registered vehicles. A registered vehicle is one vehicle registered for one year. The Prius is a top selling small 4-door car on the IIHS list. The Suburban is the biggest vehicle on the list. The Suburban’s driver deaths per million registered vehicles is 60. So now you assume we picked a ringer, a large SUV with an unusually high death rate. Nope. The Avalanche (29) has about twice the death rate of the Prius. The Ford Expedition 2WD (36) twice the Prius’ death rate. The mid-size Ford Edge (41) about triple the rate of deaths the Prius has. Just so you don’t think it is just SUVs that are so much more likely to have a driver die, let’s look at some large cars. The Buick LaCrosse (43), Toyota Avalon (37), and Chevy Impala (35) all have a much higher rate of driver fatalities. So does the Mazda6 (54). So you get the point. The Prius must be incredibly special. It is, but there are a couple of other small cars with surprisingly low driver deaths. For example, the Mini Cooper (21). This particular statistic looks at what actually happened. It is not a theory or a guess at what vehicle is safer. Will this information apply to the newer model Prius? Probably, since the Prius' safety rating in crash tests and its forward crash prevention systems have improved since the 2001 model year.

Prius and Suburban are Top Sellers
The Prius is a hugely popular vehicle. It is the single most popular car in many markets, including the US’ largest market, California. Suburbans also sell well, and in their class, the model is often the leading seller. That helps validate our conclusions because sometimes small sample sizes skew data. Of course, if the question is “would you rather be in a Prius or a Suburban in a crash” the answer is “it depends.” Am I hitting a stationary object? I’d pick Prius. Am I going into a ditch and going to rollover? I’d pick Prius. Am I going to hit another car head on? I’d pick Suburban. There is a lot to consider. Hopefully, this story got you thinking. Yes, in a head to head crash the bigger vehicle is usually safer, but that is only one type of crash.

If you are looking for a vehicle that is even safer than the Prius you might consider the Subaru Legacy, Lexus RX350, Toyota Highlander, Toyota Sequoia, or one of the other nine vehicles that had zero driver deaths over that period of time. You can view the complete list at the IIHS site.

Ron wrote on February 3, 2015 - 12:30pm Permalink
Means nothing. Get back to me when you account for variables such as the number of miles driven.
Jason wrote on February 3, 2015 - 1:27pm Permalink
This study also did not control for the driver demographics. The typical Prius owner is likely to be a safer driver compared to the typical Suburban owner.
Eduardo wrote on February 3, 2015 - 2:11pm Permalink
...Or the demographics, or type of driver. ...Or the fact that Prius Owners drive more conservatively, less aggressive that BIG SUV drivers.
Bob wrote on February 3, 2015 - 5:15pm Permalink
It seems odd to me that the Suburban 2WD had a rate of 60 per million registered years while the Suburban 4WD had only 17. And the Yukon XL (identical to the Suburban except for some trim details) 4WD had only 9. Almost all of the large and very large SUVs had considerably more deaths in the 2WD than the 4WD vehicles. An explanation of this would interest me more than why one of four versions of essentially the same vehicle had four times the deaths of the Prius.
John Goreham wrote on February 4, 2015 - 11:25am Permalink
Good eyes Bob. I noticed that 7 of the 9 vehicles on this year's list with zero deaths had 4WD or AWD. Most of those were models that primarily come in AWD (meaning very few 2WD are actually made). The remaining two were mothers' cars (a minivan and a 2WD mid-sized crossover). What surprised me about the Suburban 2WD was that there so many (166K). Nobody buys a 2WD truck or full sized sport ute north of the Mason Dixon line. Too hard to pull a boat up a slippery ramp and you can't plow.
Kyle wrote on February 3, 2015 - 6:51pm Permalink
Deaths per crash is actually a relevant statistic. Deaths per registered car is just stupid.
tom street wrote on February 3, 2015 - 8:31pm Permalink
It's simple. Prius drivers are smarter. It also might have something to do with horsepower. Or how about braking distance. Plus really large cars are much more difficult to control in the event of an event which causes a crash.
Nate wrote on February 16, 2015 - 10:32pm Permalink
Prius drivers aren't smarter they're pos foreign jobs can't go fast enough to have fun with the big boys. You enjoy your green peace crap I'll stick to making my planet warm and cozy with my 5.7 HEMI and my 5.3 Vortec
Rob pinkham wrote on September 24, 2017 - 6:31pm Permalink
My Chevy pick up V-8 is electronically limited at 98 mph... my wife's Prius cuts out at 112 mph soooo how is the 5.3 faster??? The Prius has 10 air bags and is simply on of if not the safest vehicle's on the road so all you people will just have to accept the facts I had a pick up with a v-8 and I am ok with the Prius being safer than my pick up. Who cares? We drive what we want and that is that.
Clay wrote on February 3, 2015 - 10:56pm Permalink
It's simple, Prius drivers are smarter. I would agree with that. Taking my own personal pole of those I know with each type of vehicle, and the habits of watching others on the road, SUV drivers are by and far concerned about getting to their destination asap (and you're in their way)..., while a Prius driver is doing their best to drive slower and conserve even more gas (yes, there is a discrepancy between MPG between different styles of driving the Prius).
William Burns wrote on February 4, 2015 - 2:11pm Permalink
The use of the vehicle and the mindset of the driver are important differences. If we all drove like Prius drivers the death rate would come down. They are a different kind of people.
John Goreham wrote on February 4, 2015 - 3:28pm Permalink
No arguments here. Just for thoughts though, not a single death in the Toyota Highlander, Lexus RX 350 or Toyota Sequoia during that 3 year span. They must have the qualities you infer in spades. :)
Mike wrote on February 5, 2015 - 10:34am Permalink
If a Suburban and a Prius hit head on who will win. Thats what I would like to know.
John Goreham wrote on February 5, 2015 - 12:15pm Permalink
Like I say in the story, I would definitely want to be in the Suburban in that matchup!
Looking back wrote on February 5, 2015 - 5:32pm Permalink
I think most of the Suburban drivers were killed trying to get around a Prius driving 45 in a 65 watching their mpg meter
John Goreham wrote on February 6, 2015 - 3:06pm Permalink
This was my favorite comment of the week! Perfect!
gggl wrote on September 6, 2016 - 11:32am Permalink
It is also likely that Prius drivers are more speed cautious and/or drive a lot of city miles where the hybrid really makes a huge difference. So I agree based on millions of miles it seems quite safe but there are clearly cases where it will not be, like when it gets hit by a suburban. I am surprised the author couldn't find some data to reflect for who died in a Prius accident with a much larger vehicle, like a truck. The Prius might do quite well because the larger truck might rollover from the impact or avoidance manuevers.