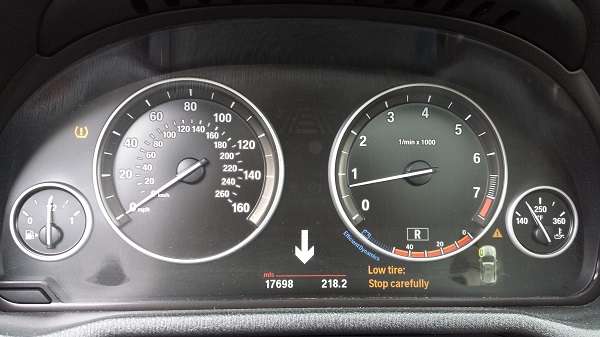 Run-Flat tires are standard on most BMWs. Why we think you should avoid them, and a selection of other opinions on the subject.
Advertisement

We recently had an unplanned opportunity to put run flat tires to the test. Our impromptu test vehicle was a 2013 BMW X3 xDrive 28i crossover. During a Sunday trip to a park we had a puncture that gave us the chance to see how a run flat preforms while driving deflated, as well as explore the repair/replacement options and see how they might compare to other road hazard management options like a full size spare or temporary spare. We learned quite a bit from the experience and hope you find this information helpful if you’re considering a vehicle with run-flat tires.

We first noticed the flat when we re-entered the vehicle because the car told us the front left tire was low via the information screen. A system like this is now government-mandated on all modern cars. Hoping it was just low, and not completely flat, we looked at it closely and could see it was definitely flat. Moving the car slowly with the window down resulted in the crunchy sound of a flat tire and the feeling was noticeably wiggly and sloppy. The sound was so much of a concern we opted to call BMW via the car’s SOS button. After reading, re-reading, and then re-reading the VIN about 6 times to the BMW representative after they already knew us from our name and model number, not to mention the account we called from (frustrating), the person at the other end told us to ignore the sounds and feelings and drive it under 50 miles, and under 50 miles per hour, to wherever we wanted to go. She said as long as we didn’t smell burning rubber not to worry. Off we went.

Run flat tires work by using a much more robust sidewall construction. The stiffer sidewall is able to support the uninflated tire temporarily. However, driving on the tire without air pressure destroys it. In their marketing, makers of run flats try to compare older tire technology to their new, lower-profile tires with the stiffened sidewalls, and claim some safety benefits. We are skeptical. Blow-outs and complete tire failures on new, lower-profile, modern tires (not run-flats) are extremely rare.

My passenger input a Nav course home (14 miles) that did not use freeways. The excellent BMW Nav system made this pretty easy to do, although we did have to wait a few minutes while it would only display a warning message about the tire. As we drove, my passenger also called the BMW dealership the car is serviced at. To its credit the dealership did answer, but since it was Sunday, they could not help us in any way. Take note of that. Next, my passenger looked up the local tire place she services her Honda Fit. It was also closed. We looked for a third place along our route home, also closed. Our plan became, “let’s get it home and then deal with the issue Monday morning.”

Driving BMW On a Run-Flat Tire
The feel while driving the BMW X3 xDrive 28i crossover with the deflated run-flat was just what one might expect. Sloppy, pulling to the side of the flat, and pretty apparent something major was up. It would be very hard to ignore this even if the dash wasn’t constantly telling us about the issue. We looked in the owner’s manual, which is the size of three Korans, and in the section under flat tires, it had a note about the 50/50 miles driving, and that was pretty much it. I mainly wanted to know if I should try to re-inflate the tire. I figured that would help, but I wanted to also make sure it would not cause a rupture of the sidewall. I saw a gas station with an air hose and pulled in. I checked the pressure and it was “0.” I pumped it up to 45 psi. Driving off the car felt dramatically better, but still slightly odd. 4 miles later we were again flat. I found a second station with a lousy air hose and put in about 20 psi. Again it felt better than flat.

The sounds of the car on the flat were the most alarming. It sounds like rubber crunching and is pretty loud. I ignored it. Keeping our speed steady and slow (about the 30 to 35 MPH speed limit) we got the car home OK.

Dealing With the Run-Flat Repair
The BMW dealer was much farther away than the local tire chains, so a local place became our repair plan. Travelling to the BMW dealer would have taken us close to our limit of 50 miles and it was also out of the way for our Monday work plans. Calling around we found that a local Town Fair Tire chain only 6 miles away had the ability to replace our Pirelli Cinturato P7 245/50/18 run flat. Here is the first point we wish to make. This was a puncture from a nail in the middle of the tread. If we had a spare we could have easily put on the spare, driven home and then to a tire place to have the puncture repaired properly (inside patch/plug, tire-off method). That would have either been free, or done for a nominal fee of less than $50. Instead, we are now looking at replacing a tire.

Town Fair and also Tire Rack, which we looked at as a reference, had pretty much the same price for the rubber. The tire itself costs about $350. Let’s stop here for a moment. We compared a best seller, non-run-flat Michelin of the exact same size and specs, and it cost only $200. So the run flat, in addition to requiring a replacement instead of repair, is also dramatically more expensive. Remember too that the closest tire place we tried does not handle run-flats at all.

I used my portable pump to pump up the tire before setting out the 8 miles back to the tire store. The ride there was the same as my previous trip.

Comparison of Run-Flat to Other Options
My 2007 Highlander Sport could have been the car taken that day. It is exactly the same size as the X3, but with more interior room and more cargo room. That vehicle has a full-size matching spare on a matching rim. Had we been in that vehicle, my matching spare would have gone on, I could have thrown the flat tire in the back, or put it in the spare tire well under the rear of the car, and then had it repaired at my leisure for less than $50. Or I could have replaced it. I just bought tires for that car and they cost $130 each including tax. This run-flat scheme is supposed to be progress?

Another alternative would have been a temporary spare. This is the direction most manufacturers are now going with most models. At least with this option I would have probably saved the cost of the new tire. Also, had we ripped a side wall from hitting a road defect, the run-flat would not have been an option and we would have had to be towed twice. Once home, and then again to the tire place the next workday.

Why Do Manufacturers Use Run Flats?
Manufacturers claim that run-flats save both space and weight. Baloney. I checked the specs of the Pirelli run-flat. Its weight is 33 pounds. The non-flat Michelin with the same specs is 26 pounds. That means a temporary spare weighing around 28 pounds would have been a zero-weight added solution compared to the run-flats. Also, a car this size with its massive cargo area can afford the small wafer of a temporary spare, or even a full-size spare, as my Highlander proves.

Conclusion – Avoid Run-Flat Tires
Manufacturers are doing everything in their power to save money, increase their profits, and to do the best they possibly can on the EPA mileage estimation test. That is understandable. However, it is hard to justify this move away from customer convenience and customer value in terms of affordable tires and repair options. This author’s opinion is that run-flat tires, and models that use them exclusively, should be avoided by consumers. We are not alone. J.D. Power surveyed customers about tires and found that customers scored cars with run-flats significantly lower than those with conventional tires. Some customers who bought run-flat tires have even sued BMW in a successful class action suit.

Other Sources of Information:
Should I buy a wheel and tire warranty?
The free run-flat tire road hazard warranty your tire shop forgot to tell you about
Will BMW move from run-flat tires to Michelin airless tweels?
Autoguide – Why You Should or Should Not Buy Run-Flat Tires
Jalopnik – Everyone Hates Run Flat Tires
Consumer Reports - My luxurious BMW 750Li run-flat nightmare
BMW's Run-Flat page