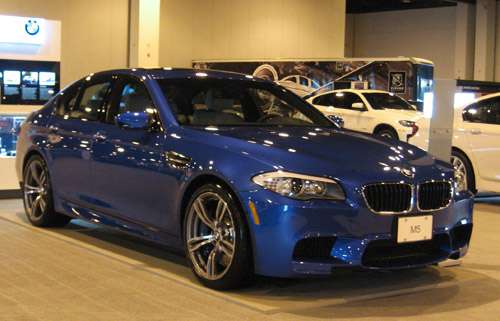 BMW introduces the onboard automotive stenographer within ConnectedDrive

BMW has long been a leader in automotive connectivity and now their updated navigation and telematics system can record short texts, emails and notes to self, behind the wheel safely via voice command.
Advertisement

In the dark and distant past, that’s exactly what a stenographer did for busy executives. Now even the blue-collar worker (with a new BMW, that is) can have such service at their beck and call in the dashboard of their new vehicle.

BMW ConnectedDrive is world renowned for state-of-the-art car concepts enhancing the driving experience. The new level of functional display marks another milestone in the development of the system, demonstrating the brand’s commitment to leadership in the telematics field.

The new BMW ConnectedDrive system will first show up in models coming to the US this fall, including the BMW 5 Series, 7 Series, as well as the BMW ActiveHybrid 3, with other models to follow.

Remarkably, individual menus are arranged in virtual three-dimensional formats with calculations performed in an instant. Providing not only easier scrolling and browsing, the system features a 1.3 GHz processor with a dedicated 3D graphics, also offering top-quality animation with quick screen refresh to improve the whole experience.

While the proven menu navigation of the previous system has been retained, new functions are added to enhance the system’s capabilities. For example, a new kind of layering and graphic display has been added so when sub-menus are selected, they are arranged on the right, while the former selections are ghosted, but still visible in the background on the left. Tactile feedback is accompanied by visual confirmation, allowing a clear view of the current position within the menu structure on display.

At the same time the navigation itself has been upgraded, though destinations are still entered via country, city and street, the chosen site is simultaneously displayed via map view in the split screen. If necessary, the driver can use a zoom function to change the section of map shown and make sure the correct destination has been entered.

High Guiding and 3D City Models.
In normal route guidance, the familiar directional arrows of the split screen are now enhanced by a High Guiding view, which augments detailed navigational data in the instrument cluster, the center screen, as well as in a Heads-Up Display. This view is activated when within a certain range of the next maneuver, from a distance of about 985 feet, in visually unobstructed areas and 490 feet, in urban areas. The arrow display then provides a detailed bird’s-eye perspective of the area. Timely lane change directions are included. As the driver comes right up on the maneuver, the display gradually shifts from the bird’s-eye view to an overhead view of traffic. A precise indicator of the vehicle’s real time position is an aid allowing the close tracking of progress.

A new option, known as 3D City Models, involves realistic depiction of surrounding streets and buildings for orientation, if the city is stored in the vehicle’s database.

Interactive map and PIE menu
Several new functions have been added to the navigation map view. The map can be scaled, tilted or changed to a different section of map, even in a diagonal direction, by the iDrive Controller. Another new feature involves the ability to select special functions from the map itself. By selecting a point on the interactive map a PIE menu appears, allowing quick access to range of functions. The driver can click to show nearby points of interest, view details when available, enable navigation, change view or display the vehicle’s current location or destination. If other information is available, such as a telephone number, it can quickly be retrieved and dialed by voice command on the paired smartphone. .

Connection of two phones and new calendar look
The new BMW Navigation system also adds new suites to the BMW ConnectedDrive Mobile Office portfolio. Two phones can now be synched to the vehicle simultaneously, with contacts from both combined into a list for hands-free phone calls. Calendar information is rapidly imported thanks to the new hardware, meaning both phones are ready to roll in a nonce.

The calendar display has a new enhanced format, with events appearing in much the same way as many email programs, while a daily view and calendar navigation have also been simplified.

There’s a lot more involved in the new BMW ConnectedDrive system so look for a follow up posting.

Tesla-Funded Research Reveals One of The Biggest Mysteries of EV Battery
Tesla Tesla Buyer Nets a Whopping $12,000 Discount After Asking for Reduction
END_OF_DOCUMENT_TOKEN_TO_BE_REPLACED