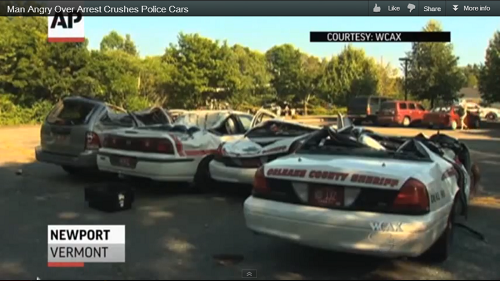 The drive-by media again miss the story within the story while reporting on a man who crushed 7 police cars.
Advertisement

A Vermont man is accused by police of running over 7 of their vehicles with a tractor. Associated Press reports that while police were inside enjoying the cool air of air conditioning, a man was in the parking lot crushing their cars with a giant farm tractor. Apparently, the narcotic-like hum of the AC masked the sound of a ginormous tractor smashing 7 cars to bits on the other side of the wall. Hmmm. It seems like this might be another case of the media missing the real story.

NECN (New England Cable News) had one of the most detailed reports on the incident. Apparently, the police cars were not neatly lined up. The alleged tractor-crush hero had to use his machine to first push the vehicles closer to one another so he could then do the monster-truck style drive over, which he did twice according to witnesses. That kind of follow through requires patience and intestinal fortitude. Anyone might have the guts to kick out a back window while laying down on the back seat of a cruiser cuffed (what, you’ve never done that?). However to take the time and attention to detail to do the job this well is pretty unusual.

Torque News has closely scrutinized the video from multiple news media outlets. Our veteran automotive experts noted one detail the fly-by media missed. Not a single cruiser crushed was a Dodge Charger (Hemi), which is now the runaway favorite of all police forces in the US. Looking at the cars destroyed one can easily detect the tail-lights of a front-drive Chevy Impala cruiser and some older Ford LTD Crown Vics. Talk to any police officer and they will tell you that being assigned a front-drive V6 cruiser is like being given a donkey instead of a horse when you are in the cavalry. The other guys tease you in the break room. Could it be that the police did know the perp was out there? Could they have seen this as their one shot to get new cars all at once? Let’s consider the facts.

In the military protecting the people and equipment in a given group is called “force protection.” In simple terms, if left unprotected, even a strong force is vulnerable to attack. Visit any local small-town police station and you will see that the police officer on duty is behind thick glass and a strong structure. They all saw “Terminator.” You will not find a police station that doesn’t also have CCTV cameras showing all approaches to the police station and feeding live video to the dispatcher. It is a simple and inexpensive way to keep our first responders safe in their station. Now consider the Orleans County Sherriff’s department officer claims that they didn’t hear a guy in a giant tractor rearranging all their squad cars, then diving over them –repeatedly.

Once again, it is Torque News who finds the real story and brings it to you here, unfiltered and for your careful consideration.

Aaron Turpen wrote on August 6, 2012 - 3:08pm Permalink
The Sheriff's station in question is located in an old bank and the deputies claim that the "thick walls and vault" mean they can't hear things outside. My question: why are ALL of them inside at the same time, sitting around long enough for this guy to have done this (over 10 minutes)? Aren't they supposed to be out "protecting and serving" and whatnot? Also note that when they did finally hear about it and ran outside, the perp was leaving in his tractor and they couldn't pursue because not a single one of them drives his/her personal car to work, they all depend on those cruisers. Maybe that's another flaw that should be reconsidered: letting cops take their cruisers home instead of driving their own vehicles to/from work, thus providing a second option. In the end, the sheriff had to call local cops to come get the guy for them. The man, despite having a loaded gun in the tractor, didn't draw or attempt to use it, showing he knew he was going to get caught and did this anyway (hearsay reports say the gun was in the toolbox, so the guy probably didn't plan on using it and may not have known it was there). I suspect there's some serious back story between this guy and those sheriffs.
John Goreham wrote on August 6, 2012 - 11:02pm Permalink
Right on Aaron. And no CCTV cameras? So a bad guy could just walk up and unload two cases of dynamite next to the wall and light a match? Come on. I don't buy it. The cops I grew up with are not dumb.