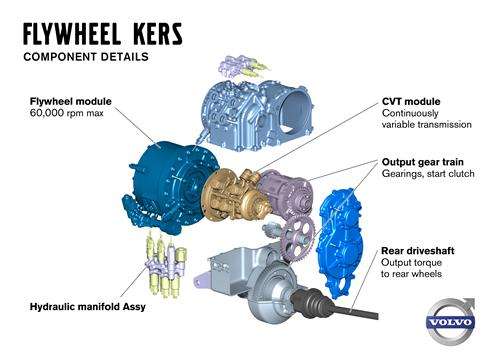 The technology Volvo is testing for passenger cars has worked in race cars and now the group says it can make it affordable. Here is how they do it.
Advertisement

In essence, Volvo has adopted the base technology widely used already in prototype, supercars, and racing cars commonly referred to as a flywheel-kinetic energy recovery system, or KERS. KERS is a term that can apply to any system that recovers energy from a car during braking. What is unusual about Volvo’s new system is the flywheel. A flywheel is simply a spinning mass that can store energy simply through its rotational momentum. When the energy recovery is wanted for powering the car that rotational energy can be tapped via a mechanical (transmission) system. In the mechanical system the flywheel takes the role of the battery in a more conventional hybrid, battery storage system.

Volvo’s present system uses a rear mounted system to capture energy and then drive the rear wheels while the conventional gasoline engine drives the front wheels. Like a typical hybrid electric drive the energy from the regenerative braking is captured and then returned when it can be the most useful. Derek Crabb, Vice President Powertrain Engineering at Volvo Car Group summarized the system this way; "The testing of this complete experimental system for kinetic energy recovery was carried out during 2012. The results show that this technology combined with a four-cylinder turbo engine has the potential to reduce fuel consumption by up to 25 per cent compared with a six-cylinder turbo engine at a comparable performance level. Giving the driver an extra 80 horsepower, it makes car with a four-cylinder engine accelerate like one with a six-cylinder unit."

Volvo thinks it will be able to make the system affordable through the use of new materials like carbon fiber. The way the car uses the system is also new and according to Derek Crabb, that will make a difference. He elaborated saying, "We are the first manufacturer that has applied flywheel technology to the rear axle of a car fitted with a combustion engine driving the front wheels. The next step after completing these successful tests is to evaluate how the technology can be implemented in our upcoming car models.”

This system or some other fuel economy booster is not an option for Volvo. Volvo needs some fuel economy gains and needs them fast. Their two most popular US models are the S60 sedan and the XC60 5 passenger compact crossover. In comparison to the Acura RDX the XC60 3.2 six cylinder AWD has less power and about 10% lower fuel economy than the similarly equipped and similarly sized Acura. In comparison to the Honda Accord V6, the 5 cylinder S60 has a highway MPG rating of 30 compared to the Accords 34 MPG highway rating. Again, the Honda has more power than the Volvo, this time significantly more.

Volvo’s investigation of a flywheel based KERS system does prove one thing. At some future point all US vehicles are going to come equipped with some form of hybrid drive to capture the energy that used to be lost when the vehicle would brake.