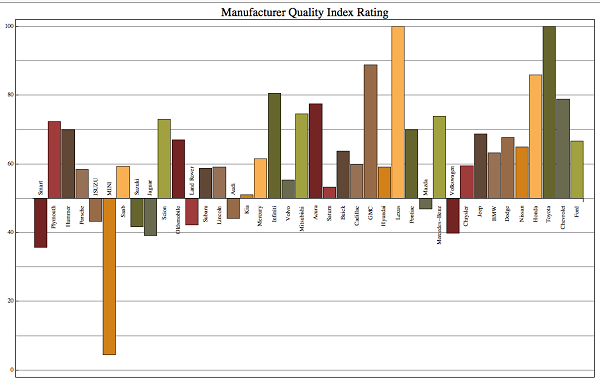 Guess who dominates the top quality rankings of used cars? MINI drivers and owners of European brands in general may want to shield their eyes.
Advertisement

This past week I had the pleasure of meeting Steve Lang at a Lexus product launch event. Steve is a guy that I find hard to pin a label on. He owns a used car dealership. He is often an auctioneer, and a frequent attendee of car auctions. He writes for Yahoo Autos, and he has been published, or worked behind the scenes at some of the most recognizable names in automotive media such as The Truth About Cars. However, when you meet him he describes himself first as a father, husband and son. What intrigued me most about Steve is that he co-authored this massive study with Nick Lariviere looking closely at which used cars are best and why.

We won’t break the report down into fine detail. Our readers can view a short Yahoo Autos story about it here, or go to the full text here. Other than the fact it looked at older cars, what really makes this study special is the source of Steve’s data. He was provided access to used car data from a number of independent used car sources. He took the data and crunched the numbers to see which brands and which models had the best long term quality. Most studies like the J.D. Power Initial Quality Study and even most of Consumer Reports’ work on the subject focuses on cars that are from 1 to 5 years old. Steve’s study goes deeper. It looks at older cars that may have been sold used once or twice already. He has looked at data on over 500,000 vehicles and what he has found is that, just like in most quality studies, Toyota and Lexus absolutely dominate.

I asked Steve why readers would think his work was different from J.D. Power’s and similar. He told me that “Unlike CR and J.D. Power, this study is the first one to rely on independent appraisers and mechanics who are trained to identify specific powertrain defects in these vehicles. CR and J.D. use subscribers who typically have little to no professional mechanic experience and usually have biases and loyalties to a particular brand (as owners of the cars they report on).”

Steve is not a Toyota/Lexus Dealer in case you were wondering. We asked about any bias. He told Torque News “I work with a variety of independent dealer networks that don't have an allegiance to any one particular brand. It's intentionally done this way so that no brand biases can sway the overall data.”

Steve drove a well-worn Volvo sedan to the track-testing meeting. We have communicated since and rather than be wowed by the Lexus, his first comment was about the great mileage he got in his Volvo on the long ride to and from the event. That erased any doubts I may have had about him being a secret fan of the Toyota family of cars.