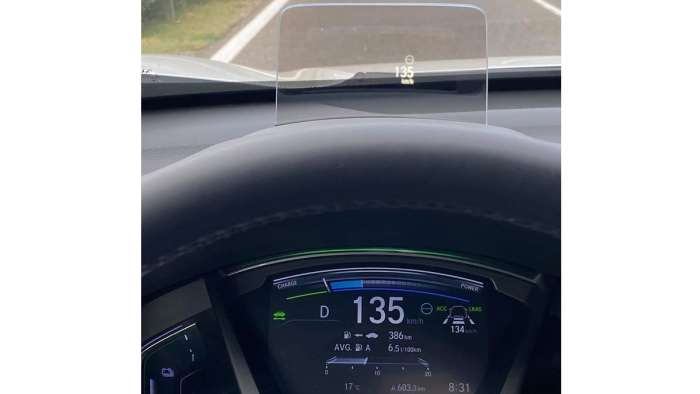 We have discovered a couple of key differences between the Euro-spec Honda CR-V Hybrid and the American version. Here's what we found.
Advertisement

Our recent test of the Honda CR-V Hybrid left us impressed. However, there were a few things we felt the new Honda CR-V Hybrid lacked that a crossover with its price point should have. Included in the list of what was missing were a head-up display and a towing rating. Interestingly, we have discovered that the Euro-market version of the CR-V Hybrid has both of these important things.

Related Story: 2020 Honda CR-V Hybrid AWD Adds Mileage, But What Do Buyers Have to Give Up?

Honda CR-V Hybrid Head Up Display
We discovered the head-up display entirely by accident. While we were reading over the posts in the Facebook Honda CR-V Hybrid club, we noticed that one new owner had posted the image at the top of our page. Paul Daniel Schneider said in his post that he loved his new Honda CR-V Hybrid Executive trim and we saw that all of his fuel economy numbers used SI units, there than MPG units.

His image clearly shows a head-up display, so we returned to our top-trim US-spec CR-V Hybrid and liked. Nope, no place for a HUD that we could see. The dash lacked the cut-out for the pop-up plastic screen the HUD uses. We enjoy using head-up multi-information displays, and we look forward to that feature being added to the US-spec Honda CR-V Hybrid at some future date.

Honda CR-V Hybrid Towing Rating
Whe we do any vehicle test at Torque News, we always review the specifications carefully. One we always not is the "Towing rating." Every sport utility vehicle should be able to tow a small trailer. Otherwise, it lacks the "utility" part of its name! Nearly every small crossover can handle a 1,500-pound trailer. However, the CR-V Hybrid's US-specifications say "N/A." As in "Not allowed." However, Honda was kind enough to supply us with the Euro-spec sheet for the CR-V Hybrid and it says "Townig Capacity (braked) = 750kg, and "Towing Capacity (unbraked) = 600 kg." So we have a suspicion that the US-spec model can actually tow a small trailer. Honda for some odd reason did not rate it that way.

Our thanks to Paul Daniel Schneider for allowing us to use his post. We hope that fellow Honda CR-V Hybrid owners and fans may find this information useful or of interest.

Tsingshan's Threat to Tesla: EV Maker Is In Battery Crosshairs
Tesla-Funded Research Reveals One of The Biggest Mysteries of EV Battery
END_OF_DOCUMENT_TOKEN_TO_BE_REPLACED