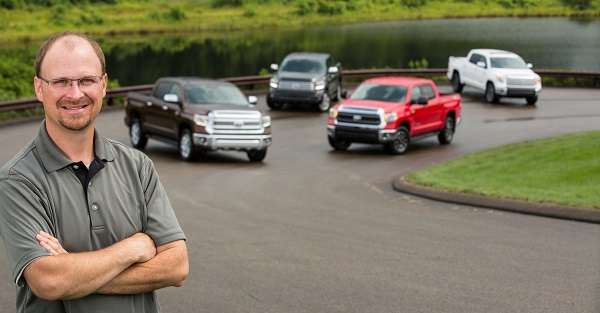 The Tacoma gets all the glory, but Toyota’s other truck is the topic of this Q&A.
Advertisement

Mike Sweers is Toyota’s top truck guy. Officially, he is the chief engineer for both the Tundra and Tacoma. Toyota quizzed him with six questions to give some insight into how a chief truck engineer pulls the product together. Here’s what Mike Said.

Question One: What is it that you do?
Toyota Asked Sweers what he does. He replied that it is his responsibility to take the truck from square one to the finish line. His answer was interesting because it didn’t include what he thought a truck would be, but rather, “… what the customer wants, needs, desires, and how that vehicle fits into their daily life. Sweers says the key is to understanding “What do they do with them? From a daily driver, to weekends, to the guy who goes out and races his truck in the desert or rock climbs. How do we fit each one of those customers’ needs?”

Question Two: Do you really start from scratch?
Sweers was honest and didn’t say “yes.” In fact, Sweers admitted that the Tundra is a niche vehicle, compared to the Tacoma, which leads the segment in both sales and most other metrics. Sweers says that with Tundra, “We can be a little polarizing, a little daring on Tundra because it’s a niche vehicle.”

Question Three: How do Ford's F-150 and Toyota Tundra's customers differ?
Quality, durability, and dependability were the themes Sweers stressed when asked what a Toyota truck customer expects. He said a Toyota customer thinks of his purchase, “I bought the best. I can do whatever my neighbor’s F-150 can do, but I know it’s going to last forever.”

Question Four: Do sales matter in your approach?
Answering honestly, Sweers admitted sales are always a consideration. He said, “We’re going up against the best-selling vehicle in the country, but how we do it is with QDR, styling, by making sure we’re meeting our customers’ requirements for wants needs and desire.”

Question Five: Explain the design process.
Here Sweers went into great detail, but what we thought was interesting was his openness about cost control. He said, “We work with purchasing every day, cost planning every day. We need to make sure we’re hitting design targets.”

Question Six: What’s important to doing this job well?
Sweers used his own life experience to answer this question. He pointed out that when he would change the oil in a van, he owned it would take an hour and a half, much of which was spent cleaning up spilled oil since the process could not be done neatly. His view is that small details like that matter and need to be done right on Tundra.