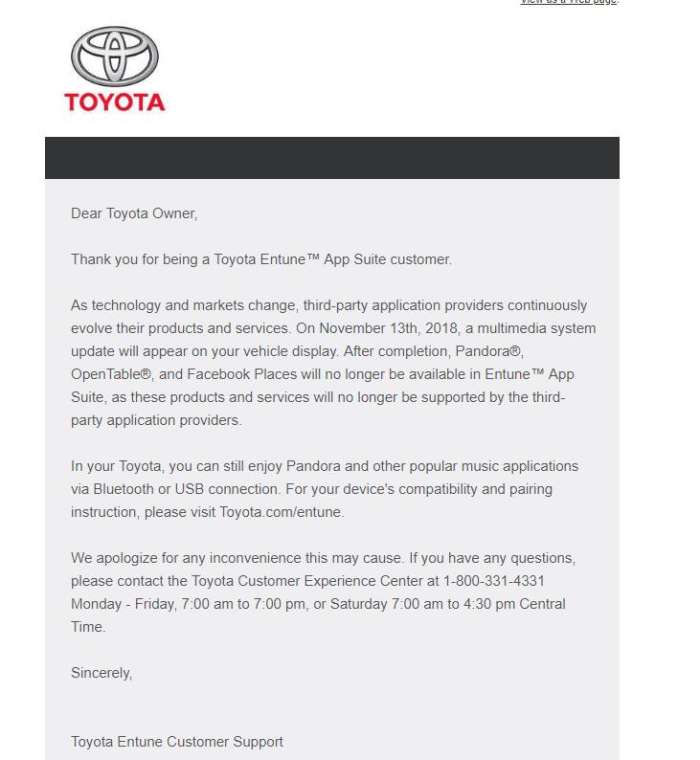 Toyota has been struggling to keep up in the ever-changing infotainment landscape. A new development should be concerning to anyone who enjoys Pandora.
Advertisement

Toyota owners have been notified by Toyota that, as of November, their Entune infotainment system will stop supporting Pandora. What that means is the app will no longer integrate directly. Functions such as the thumbs up and thumbs down and the station listing will no longer be part of the on-screen menus.

Pandora is neck an neck with Spotify as the most popular online music provider in America. The app has over 73 million active monthly listeners and about 2.5 million active sessions on average according to Statista. Amazingly, 23% of the population of the United States reports using Pandora in the past week. To say that Pandora is one of the most popular in-vehicle apps in America is a huge understatement.

This is not Toyota's stumble with regards to infotainment. The company has only just started to roll out Apple CarPlay on select 2019 models, and Android Auto is not available on any. That excludes the fully 43% of users who own and use Android devices. 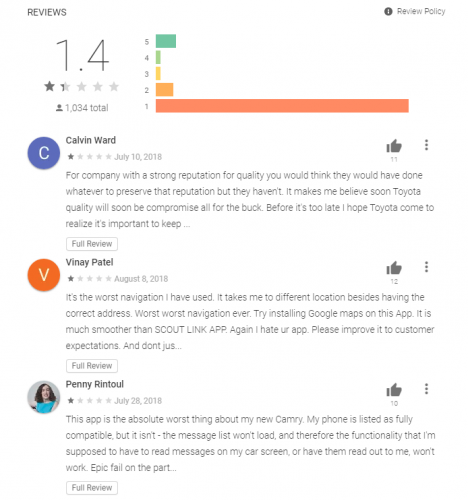 Entune, Toyota's native app that organizes the third-party apps in an owners Toyota has a terrible 1.4 stars rating on the Google Play Store and about a thousand reviews. In many Toyotas, Entune works with Scout Navigation. Scout GPS Link has a 2 out of 5 rating with just a couple thousand reviews. By contrast, Pandora has 4.5 rating and about three million reviews. Android Auto has a rating of 4 and about 300,000 reviews.

Any vehicle with a USB interface or Bluetooth can connect to Pandora and simply stream the music from your smart device. However, as Pandora users all know, the beauty of Pandora is the ability of the user to switch channels and modify their playlist on the go. Starting in November some Toyota owners will lose that ability, which came with the car they purchased.

Torque News reached out to Toyota for confirmation of the letter above and received it. We also asked for any updates on Android Auto. A spokesperson for Toyota Told Torque News, "We do understand there is demand for Android Auto and have not forgotten our Android customers. We have taken steps to support them, including enhancing Entune 3.0 to allow third-party app developers, like Glympse, to become directly compatible."