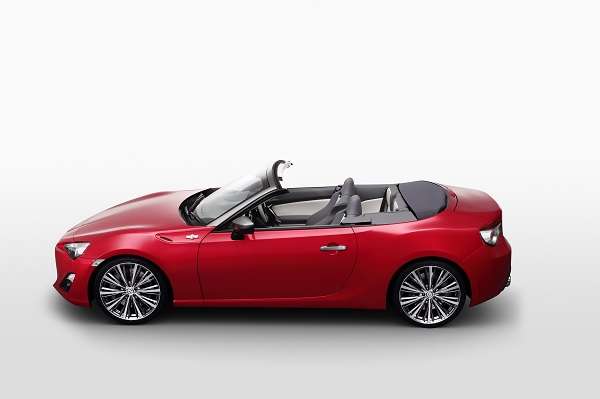 Toyota has a Scion FR-S convertible it could sell now in the US market, but as we explain, Toyota has some good reasons not to.
Advertisement

Toyota unleashed a wild group of prototype and concept cars at the Tokyo auto show, but none had more impact than the future Scion FR-S Convertible. Called by Toyota the FT-86 after the iconic, rear-wheel drive AE86 Corolla, the new convertible was shown in “arrest me red” officially called “Flash Red.” Offsetting the red was a two-tone ash and gray interior. The car looks finished and could be a 2014 or 2015 model for Scion. Subaru also has shown its version of the Toyabaru sports coupe in drop-top guise and says it plans to sell the car in the US. Toyota’s plans for selling a convertible remain clouded.

One reason Toyota may not sell the car is the Lexus IS 250C. The IS 250C is very similar to the Scion FR-S convertible on paper. Both are rear drive, relatively compact, the FR-S is slightly smaller, and both have about 200 horsepower. However, with the Scion needing to cost about $30K to $35K, the Lexus would possibly suffer price erosion. It retails for about $50K currently. The Lexus was introduced in 2009 as a 2010 model and has sold in low numbers, but consistently for Lexus. It is also available in a powerful 306 horsepower version called the IS 350C which sells for about $5K more.

If Toyota is concerned that the Scion FR-S convertible may be too close for comfort to the Lexus, it may only require a year of waiting to solve that. Toyota this same week showed the world the RC 350 sports coupe. The two-door IS 350-based sports coupe has significantly raised the panache of the IS line. It will very likely be the platform for the new Lexus convertible in 2015. The refinement, power, and luxury levels of the RC 350C convertible will be so far from the Scion FR-S convertible at that point there would really be very little cross shopping between the two. That could be what Toyota is waiting for.

Another concern for Toyota about bringing the Scion FR-S Convertible to the US market is power. Although an excellent sports car, as an on-the-road car the Scion FR-S is underpowered already. Adding weight (as most convertibles do) will only make that more pronounced. This author has driven both the automatic and the stick shift. The stick can be revved to the point of enjoyment, but the automatic is an absolute dog. Toyota might be concerned about poor reviews.

The Scion FR-S is a success, but that does not mean high volume of sales. In October Toyota sold just 1,200 Scion FR-S models. That number is so low for Toyota it may be hard for executives to get their brain around introducing a new model they know will only add a fraction of that to the sales number.

If you think the Scion FR-S convertible would be a successful car for Toyota please comment below.

patricia gallini wrote on June 9, 2014 - 8:58am Permalink
I am interested. I have the 2008 convertible, the solara. I love it. I want a 6 cylinder. When will one be on the market in the USA?
Drake wrote on October 1, 2014 - 2:19pm Permalink
This is sad, the FR-S looks amazing and mean. This looks like a barbie doll car, in which i hope never comes to the states. How about a turbo or some more stock power? I can't believe you guys would do this to a beautiful car.
Vicki M.Jones wrote on October 18, 2014 - 9:13pm Permalink
I have a 2006 Solara convertible.iIt is pearl white w/ black top. I love it. It has been a great car. Still getting compliments on it to this day. I will keep driving my Solara until the new Toyota convertibles are out for the public to purchase. I have 4 friends with Solara convertibles. They love theirs also. We are all waiting for the new beautiful Toyota Scion convertibles to come out on the market. I am anxiously waiting in Jackson , TN.
Steve Shepperd wrote on November 10, 2014 - 10:39pm Permalink
Good Grief! Just build the car and make a peppy motor an optional upgrade - like the supercharged motor from the old MR2. Young families will enjoy a fun, reliable convertible that will seat 4 and last until the kids are old enough to drive themselves. They certainly will not invest in a Lexus only to have heavily blued dyed slurpees spilled in the back seat. They buy the Lexus for themselves after the kids move out.
Nancy wrote on April 8, 2015 - 10:45pm Permalink
I would love to buy a Scion FRS convertible. Will they be for sale in the US soon?

LG's New EV Battery Plant Is a Welcome News for Tesla
Tesla Giga Berlin's New Hurdle: It's Not Only the Gov't, but Now Tesla Itself
END_OF_DOCUMENT_TOKEN_TO_BE_REPLACED