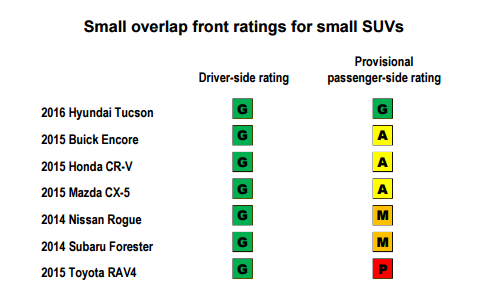 The Toyota RAV4 earned a score of “Poor” on the latest Institute for Highway Safety’s (IIHS) small frontal overlap crash test. This test was a preliminary test round done by IIHS to see if automakers are providing the same safety systems on both sides of the vehicles being tested. In the case of the Toyota RAV4, which had previously earned a “Good” score on the driver’s side, the answer to this important safety question is a definitive “No.”

- Why This Test Matters So Much

Since it was started, the Institute for Highway Safety’s (IIHS) small frontal overlap crash test has always been performed on the driver's side of the vehicle. This important test simulates a vehicle hitting a telephone pole or other unmovable object with just the front 25% of the vehicle. Since such a small amount of the vehicle impacts the barrier, less of its crash structure is able to absorb the impact, making this the toughest of all frontal impact tests.

All of the top-selling vehicles in the compact crossover class now earn a “Good” score on the test when done on the driver’s side like they expect it to be. However, Toyota apparently did not include that same level of safety on the passenger side, which they did not expect to be tested. (More on page 2)

Had the result of this test been included in its evaluations fort Top Safety Pick, the RAV4 would have been eliminated from consideration. IIHS may add the passenger-side test for 2018. Toyota was not alone in doing worse on the passenger side test, but had the most disappointing results. Subaru ‘s Forester and Nissan’s Rogue both scored “Marginal” on the new passenger side test. The Mazda CX-5 and Honda CR-V scored “Acceptable.” IIHS also tested the smaller than compact Buick Encore, which earned an “Acceptable” rating.

Torque News called out the RAV4 in 2013 when it was tested and scored “Poor” on the conventional small frontal overlap test. We also reported that the vehicle had been redesigned in 2015 and was retested and scored “Good.” Toyota obviously did not add the improvements to the passenger side. The test is not a fluke. IIHS noted that the RAV4 is “asymmetrical” in its appearance from side to side. Toyota didn’t hide its lack of safety structure. Some automakers may have. Some that did worse appeared to have the same structural components, but IIHS suspects they may be slightly thinner and weaker.

In 2013 we covered the small frontal overlap test after automakers had time to adopt new standards to score well on it. This author's suggestion then, as it is now, was not to buy a new car that cannot score “Good” on a small frontal overlap test. With the newest information available, the list of vehicles that can score “Good” on this test when done on either side is narrowed to just one model, the 2016 Hyundai Tuscon.