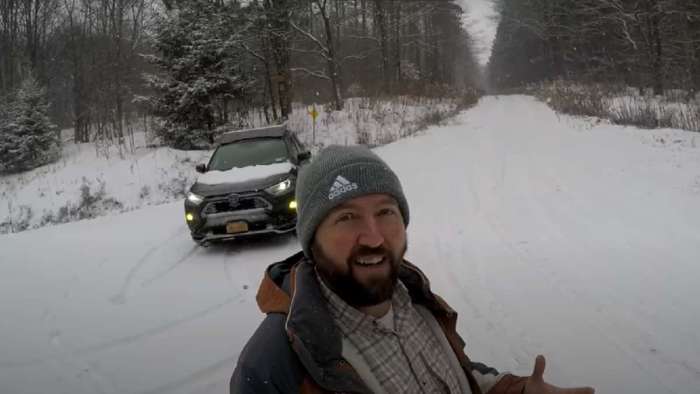 One Toyota RAV4 Prime owner does some winter soft-roading to highlight the green crossover’s capabilities.
Advertisement

If you follow our Toyota coverage here at Torque News, you know we did a deep dive on the RAV4 Prime’s unusual all-wheel drive system this past summer. However, with the vehicle being all-new to the marketplace, it is only now that owners are starting to probe how deeply this 300 hp 94 MPGe plug-in hybrid electric vehicle can go into the snowy woods.

Owner James Klafehn is no stranger to EVs. He’s an advocate, early adopter, and former Tesla Model X owner. He’s also an inventor of sorts. He has created travel trailers with added battery packs to allow plug-in vehicles to go camping without needed to charge as frequently. Like many green vehicle enthusiasts, myself included, Klafehn has owned some fast ICE cars in the past, including a Mustang that could run the quarter in 10 seconds.

In his most recent video, Klafehn explores snowed-over dirt roads and unimproved logging trail type roads in the Northeast. Like many crossover and SUV owners, Klafehn swapped out his stock all-season tires for some more capable rubber. However, he didn’t opt for winter tires like Bridgestone Blizzaks or Micheline X Ice. Instead, he opted for all-terrain tires, specifically, Firestone Destination A/T2 tires. While not targeted specifically at snow service, they are rated for snow duty and offer a bit more security for those who will be leaving the pavement. 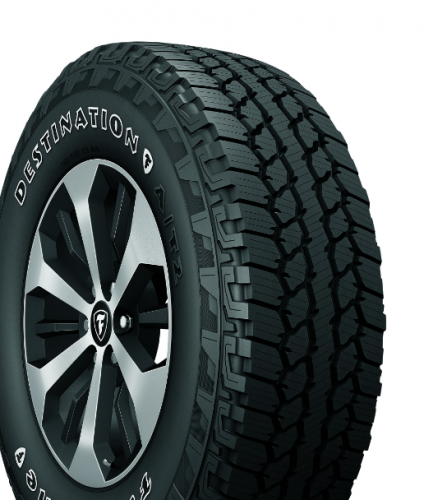 We communicated with Klafehn and asked him for some background and commentary on his video. He told Torque News, “This was my first time in these conditions in the RAV4 Prime, and I wasn’t really sure what to expect. I don’t think the base was that bad. It was a seasonal road but I don’t think it was too beat up. Either that or the ride quality of the Prime is phenomenal. As you can see in the video I was very comfortable. Not bouncing around much at all. I started out in Eco mode, then switched it to Sport mode (it gives a little more regen). When I was having issues on ice, I switched it to Trail mode. Personally, I didn’t notice much of a difference in any mode. However, I plan on doing more videos like this. I will try them all again in future videos.” 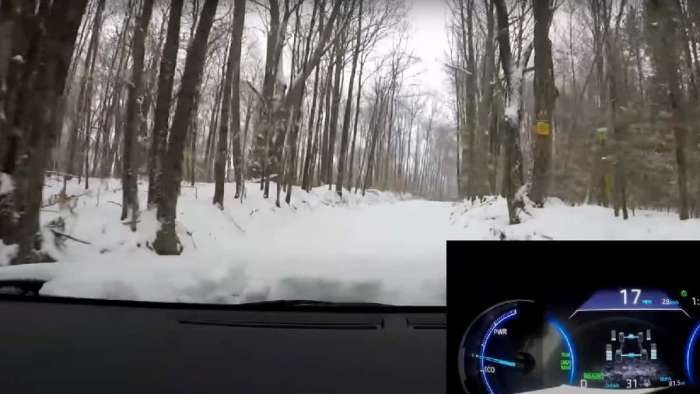 Klafehn’s video is surprisingly addictive to watch. Particularly, if you are like me and own a vehicle you use to explore back roads, country paths, and logging trails during the winter. I use a Subaru Forester with Bridgestone Blizzaks. However, I’m a green vehicle advocate myself and have often wondered if a RAV4 Prime would be able to get me and my family to our winter cabin, which is only accessed by two steeply-hilled dirt roads that the town has no part in maintaining. Having watched Klafehn’s RAV4 Prime travel on exactly this type of soft-road-covered-in-snow, I now know the answer is a definitive “yes!”

Klafehn has proven that the 300 hp Toyota RAV4 Prime is not just Toyota’s quickest SUV or Crossover, and not just the company’s most energy-efficient AWD crossover, but also one of its most capable in winter conditions. Toyota shoppers who ski, own a remote cabin, or simply live in conditions where the roads are rough, unpaved, and often covered in relatively deep snow, can now purchase a RAV4 Prime knowing that its novel all-wheel drive system and suspension are more than a match for such conditions.

Our thanks to James Klafehn for sharing his video with us. Please click and subscribe above to show him your support.