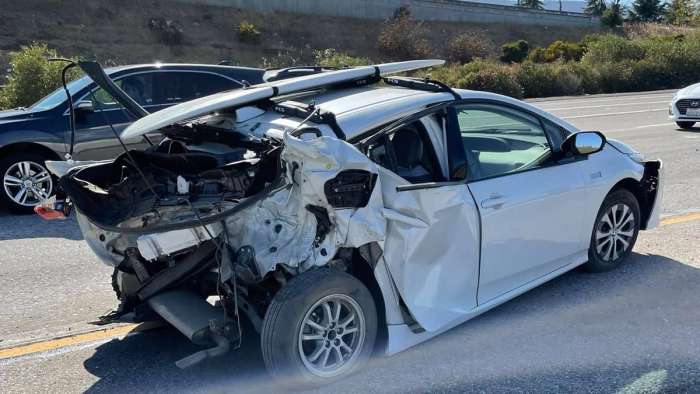 Toyota’s focus on safety is clearly evident in the outcome of this crash between a Prius Prime and a Pickup Truck.
Advertisement

Toyota Prius Prime owner DH credits the vehicle with saving his life. This past month, while he was stopped in traffic in California, the occupant of a pickup truck fell asleep and hit the 2020 Prius Prime XLE from behind at approximately 65 MPH. DH and the passenger are recovering from non-life-threatening injuries. We communicated with DH from his hospital bed to bring this amazing story to light.

Related Story: The Occupants Of This Toyota Prius Squished By A Tractor Trailer Are OK

DH reports that the Prius Prime's rear crumple zone worked exactly as designed. It crumbled in the back, but no damage was transmitted to the front two seats. The incredible force of the truck's impact slammed the Prius Prime forward and into a wall. Both occupants of the Prius Prime were very banged up but are grateful to be alive. Following the impact, the Prius Prime's telematics SOS service called the police and ambulance. 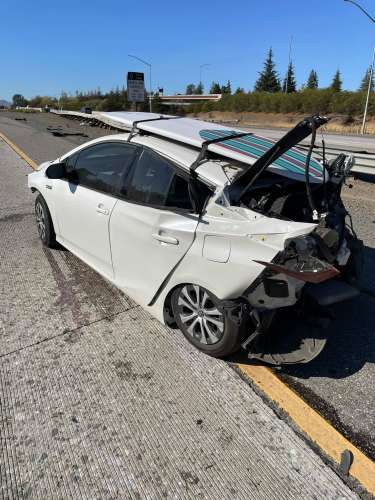 Q. Do you credit the Prius Prime's safety structure and other safety features with saving your life?
While there are some unknown factors to me at this time, such as the non-deploying airbags, I do believe that the Prius Prime crumpled in a way that absorbed the impact without her vehicle coming into the front seats. I had stopped in traffic, and I was rear-ended by a large, older pickup truck going 65 MPH, and pressed into the jersey wall. I am impressed with the way the Prius took the hit. Had it been another vehicle, I’m not certain the outcome would have been as fortunate.

Q. It seems obvious, but can you confirm that the pickup truck was not equipped with automatic emergency braking?
It was an older GMC pickup truck. I don’t know anything about it.

Q. How did the driver of the truck who apparently fell asleep make out?
She had a broken left clavicle. My brother suffered facial fractures and lacerations. I suffered trauma to my head (internally).

Q - Do you have anything to add to the story about the crash and the Prius Prime?
The Prius Prime was the car I had wanted for a long time and finally bought new at the end of last year. I’m deeply saddened by the loss of it. I am incredibly grateful for its design, both before the crash when it was my daily driver, and in the crash with how it absorbed the impact.

Q. Now that you are without transportation, what are you considering for your next vehicle, assuming it is available?
I’d love another Prius Prime, but I want what I had - blizzard with moonstone! Unfortunately, I haven’t been able to find one as of yet. I’m not certain what I’ll do next, unfortunately. I guess I’ll be driving my old Vanagon around in the meantime! :-)

The 2020 Prius Prime was rated a Top Safety Pick following its 2019 testing by IIHS. The test includes a dynamic crash test simulation of a vehicle being struck from behind. Three evaluations are done to determine how safe the vehicle is in such a circumstance. The Prius Prime scored the highest possible grade, Good, on each of those three rear impact criteria which include seat/head restraint geometry, dynamic testing, and an overall score.

The IIHS test simulates a rear-end crash with a velocity change of 10 mph, approximately equivalent to a stationary vehicle being struck at 20 mph by a vehicle of the same weight. As we now know, the Prius Prime can withstand an impact of a 65 MPH differential in vehicle speeds and the impact of a huge vehicle of more than double its own weight.

Our thanks to Toyota Prius Prime Owners club on Facebook member DH for taking the time to share this story with Prius fans, owners, and future owners. We wish everyone involved a quick and full recovery.

LG's New EV Battery Plant Is a Welcome News for Tesla
Tesla Giga Berlin's New Hurdle: It's Not Only the Gov't, but Now Tesla Itself
END_OF_DOCUMENT_TOKEN_TO_BE_REPLACED