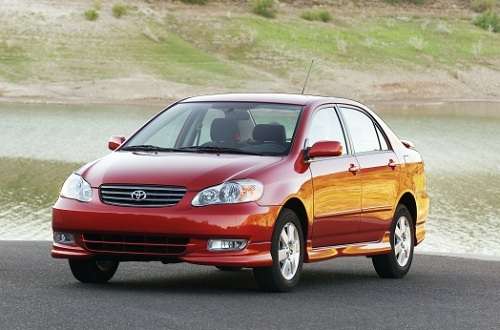 Toyota has issued a voluntary recall for the Corolla, Matrix, Sequoia, Tundra and Lexus SC430 of certain years. Click here to see if your car might be included.
Advertisement

Toyota has issued a voluntary recall of nearly 200,000 vehicles for problems related to the deployment of the front airbag. The recall spans several different models and includes the ubiquitous Toyota Corolla from model years 2001-2003. The hatchback version of the Corolla, the Matrix is also included. Other vehicles in the recall are the SC430 from Lexus, the Toyota Tundra and the Sequoia.

Toyota’s concern is that the airbag inflation wafer, pyrotechnic charges that burst into action during a crash, may have been manufactured improperly. If it does inflate other than as designed, the passenger side airbag could have a rupture of its inflator, and thus the airbag’s deployment would be less than perfect.

Toyota knows that there are about 170,000 inflators that will need replacement, however, it may have to inspect as many as 510,000 vehicles to locate the offensive wafers. In a touch of retro communication likely required by federal law, Toyota will reach out to its customers by first class mail. Customers whose vehicles are inspected and found to indeed contain the unpalatable wafer will have a newly manufactured one that meets the expected design and quality standards installed at no cost to them. (Except their time.) Presumably the removed wafers will be carefully rendered inexplosive and discarded safely by Toyota technicians. It is well known that airbags are one of the internet viral videos recipe key ingredients.

Airbags have been pesky critters since their introduction, accounting for an outsized amount of recalls given their cost and maturity as a technology. However, few other systems in a car involve solid state G-meters, an explosive charge, and the ability to go off quicker than a Sidney Crosby snap shot. The most recent near-famous airbag recall would certainly be the Hyundai “Severed-Ear” airbag recall. In that case a suspected ear-removal by airbag case prompted the recall. For recent details on that recall, first reported here by Patrick Rall, click here.

Last year Toyota was the recall champion with more recalls than any other manufacturer. It concurrently won pretty much every reliability and quality award in the industry.