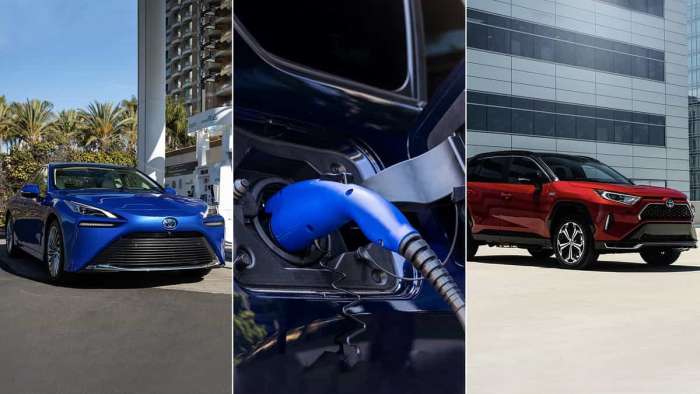 Is This the Third-Gen RAV4 Battery Electric Vehicle? Toyota to Debut Three EVs This Year

Toyota announced today that it will drop three new green vehicles into the U.S. market this year. Here's what we know so far.
Advertisement

Toyota announced today that the company will debut three new electric vehicles in the American market this year. These vehicles will augment the plug-in hybrid-electric Prius Prime and RAV4 Prime already on sale, as well as the Mirai hydrogen-fuel-cell- EV that is sort of on sale.

“We continue to be leaders in electrification that began with our pioneering introduction of the Prius nearly 25 years ago,” said Bob Carter, TMNA executive vice president of sales. “Toyota’s new electrified product offerings will give customers multiple choices of powertrain that best suits their needs.”

Don't Trust Your Eyes
Toyota included the above image which shows fans nothing. The image on the far right appears to be the existing RAV4 Prime introduced about a year ago. Or is it a new Gen-3 RAV4 BEV? All Toyota has said thus far is that the three new electrified models will be two BEVs and a PHEV. If that image is not a RAV4 BEV, then why did Toyota include it?

PHEVs vs. BEVs
Toyota then launched into a very long explanation of why its studies show that plug-in hybrids offer equal environmental benefits to battery-electric vehicles. This is something that every PHEV owner already knows and every BEV EVangelist will never believe. What Toyota does not address is the fact that many EV owners don't consider saving the environment their main goal. For this segment of green vehicle buyers, the primary goal has shifted to moving away from liquid fuels entirely, regardless of the expense and regardless of the cost-benefit analysis for individual buyers.

“We believe the fastest way to lower greenhouse gases in the transportation sector is to offer drivers lower carbon choices that meet their needs,” said Gill Pratt, chief scientist of Toyota Motor Corporation and CEO of Toyota Research Institute. “At every price point and with multiple powertrains, we can put more people in cleaner automobiles across North America to have the greatest near-term impact on total carbon emissions.”

The RAV4 Prime PHEV launched last year and was immediately ridiculed by some BEV advocacy publications. The haters chose to pretend that Toyota's initial ramp-up of its new PHEV was unusually low in some way. This despite the RAV4 Prime's ramp-up in deliveries being among the fastest in EV history. Buyers are paying MSRP or even above for the hot new EV. 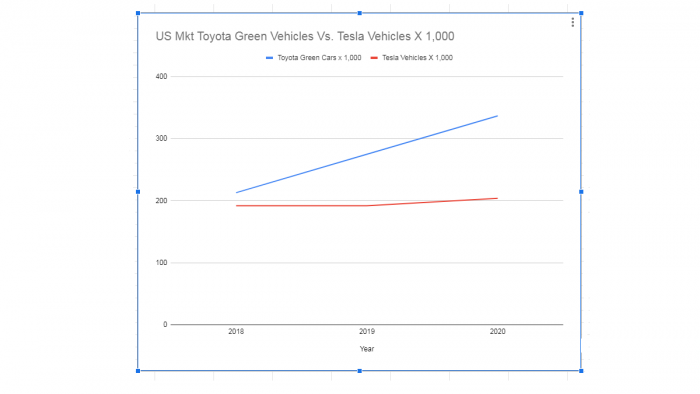 Related Story: Tesla’s US Deliveries Remain Nearly Flat As Toyota Hybrids Grow By 37%
Toyota's green vehicle fleet is also expanding rapidly through its new hybrid models. In the case of the Sienna and Venza, only a green powertrain is offered. Both have MPG ratings 30% above their peers in their segments.

Torque News will bring you all the Toyota green vehicle news as it develops.

Luther Renfroe wrote on February 10, 2021 - 3:07pm Permalink
They need to put more effort into making more Rav4 Primes as they can sell all they can make. They screwed up & dropped the ball on that one.
John Goreham wrote on February 10, 2021 - 3:32pm Permalink
Hopefully, when the delivery volume increases 4X for the new model year it will be a bit less of a struggle to find one.
DeanMcManis wrote on February 10, 2021 - 4:30pm Permalink
I believe that Toyota's solid state batteries will be shown only in prototype form this year (one show vehicle), with production 2-4 years from now. Maybe. This Toyota blurb seems to just restate Toyota's reasons for not entering the (BEV) battery-only electric car market. As most of their legacy automaker rivals have committed to do. I actually agree with them in the fact that by offering hybrid, and plug-in hybrid versions of most of their models, it allows them to produce and sell more vehicles that run off of electricity compared to other huge automakers that only offer one BEV, no hybrids, and mostly sell more profitable, gas guzzling, smoggy trucks and SUVs. The hard part of this news, is that for all of Toyota's words and posturing, they have not said anything new. Or revealed any confirmed clues that they are going to ever shift to offer any BEVs in the U.S. Since Toyota is spending all of their time justifying why they they prefer to be building hybrids, PHEVs, and FCEVs over BEVs it is not certain that they will actually start selling any BEV models in the U.S. this year. If Toyota does finally build a full BEV version of the RAV4, then I hope that they build enough of them to make a difference, seeing how their restriction of production, sales, and subsequent dealer price gouging severely limited the impact of the RAV4 Prime PHEV, which could have been a top seller if fully supported by Toyota.
John Goreham wrote on February 11, 2021 - 8:51am Permalink
I agree with your take. Spot on. I hope the "debut" is followed by a model we can drive home in, but Toyota has always been good about that. They are not a vaporware type marketer. Usually.
Mark wrote on February 11, 2021 - 11:58am Permalink
Toyota's statements are designed to stall buyers looking at EVs while they scramble to bring their own to market when seeing they misjudged the momentum of the market. They showed no vehicles at all. Moreover, they were one of the automakers that supported the Trump administration against California only changing their tune when Biden won. They have adopted the whiny, lying business model of American automakers in trying to avoid doing the hard work of innovation. For decades we heard nothing but cries of "That is impossible" or "It's too expensive" from US makers only to have foreign companies prove them wrong at every turn. Today we have 300 HP Civics and Subarus because of the innovation springing from these regulations. Toyota is seeing everyone else moving forward and claiming customers and is trying to change the narrative. Sorry, they are dead to me.
Doug Arens wrote on February 11, 2021 - 12:33pm Permalink
I’m a current owner of a 2014 Toyota RAV4 Ev. Not a day goes by that I don’t worry my Rav4 will brake down and I’ll be left stranded for months waiting for Toyota to fix it. The Toyota dealership I purchased my Rav4 Ev refuses to even look at it! Only select dealerships have trained technicians to work on BEVs. If Toyota does sell BEVs in the future their attitude on fixing them better change!
John Goreham wrote on February 12, 2021 - 10:22am Permalink
Thanks for adding this comment Doug. Your story is very similar to one I have heard from RAV4 EV owner Jim Klafeh, who has a popular Youtube series about EVs. There is no excuse for terrible service. But there is context. California mandated that manufacturers create an EV back in the era yours was built. So Toyota complied. Toyota also offered a lease option on the vehicle, and that may have been a safer bet for consumers. The first generation was lease-only. Sort of like GM's EV-1 program. From what I can discern from online research, you have one of the few hundred remaining Gen-2 RAV4 EVs still operable.
Edward wrote on February 12, 2021 - 9:29am Permalink
I spent the last couple months looking for a car. EV's were definitely on my radar. Unfortunately the way I'm looking at it Toyota probably has the right idea by waiting. New battery technology seems to be changing with a lead time of 4 to 5 years before it's useable. All these cars that take hours to fully charge will be replaced by quick charge systems. Do we know if the current EV's will be able to be refitted to the newer standard? I don't think anyone has an answer for that yet. If they can't , they're basically luxury golf carts.
John Goreham wrote on February 12, 2021 - 10:16am Permalink
Edward, your comment is great, but even more interesting in the context of the comment directly above it from one of the couple thousand Gen-2 RAV4 EV owners. Toyota has twice before done proof of concept RAV4 EVs in limited numbers to see how they work for the consumer. With the battery supply chain a mess, and zero chance that a mine will ever be built anyplace but China or the third world, Toyota is taking a path to solving a problem that is unpopular among those who want an affordable, reliable, enjoyable EV today.

Tesla-Funded Research Reveals One of The Biggest Mysteries of EV Battery
Tesla Tesla Buyer Nets a Whopping $12,000 Discount After Asking for Reduction
END_OF_DOCUMENT_TOKEN_TO_BE_REPLACED