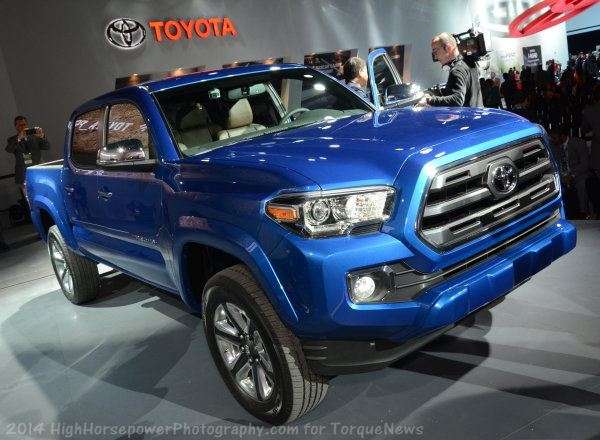 Toyota’s vehicle sales continue to grow faster than the industry rate, but Tundra and Tacoma can’t, and it has nothing to do with the competition.
Advertisement

Last fall we reported on Toyota’s Tacoma factory expansion. Actually, the expansion is in the workforce. Toyota is adding a third and final shift to its Tacoma line to reach maximum capacity for truck production finally. The new capacity will come on line later this year in time to build the 2016 Tacoma, which looks to be another home-run for Toyota. After the slight increase over the current capacity, that will be it for Toyota truck growth for some time.

So why not build another truck factory? Toyota could do that. It is the most profitable automaker on the planet, and certainly the most profitable by far in the US market. Spending a billion or two to build an all-new truck factory is achievable for Toyota. Our speculation is that Toyota likes its position in the truck market. Toyota enjoys the best resale value of any vehicle – not just truck – with the Tacoma, and the 4Runner and Tundra are the top vehicles for resale value in their categories. One reason for this might be that Toyota never has excess truck capacity to sell cheaply. A tight supply ensures a high value.

Another reason and we are basing this on an educated guess, is that Toyota does not want to dilute its overall mileage numbers. Toyota is the greenest automaker in the world. Its Prius has saved more gasoline than all the electric vehicles ever produced have. Moving strongly into hybrids has put Toyota in an excellent position to enable their performance vehicles from Lexus and Toyota to have a little breathing room. Toyota introduced two V8 models in the past six months. It’s nice to have a little room in the CAFE numbers to do that.

The Tacoma is presently capturing 60% of the market in which it competes. That share will drop a bit as a percentage as the excellent new Chevy Colorado and GMC Canyon are brought up to full production. However, Toyota’s Tacoma will still sell out and will still have an excellent resale value going forward.

Aaron Turpen wrote on January 28, 2015 - 2:16am Permalink
It might also be that Toyota is, in the end, a highly conservative Japanese company that runs top-down. The Tacoma might never have seen any updates if it weren't for GM re-entering the midsize truck market. As it is, the updates to the Tacoma are very conservative as were the recent updates to the Tacoma. You're right, though, Toyota at the highest corporate level seems disinterested in pickup trucks as anything but a niche portion of its overall sales.
Jeff wrote on May 14, 2015 - 5:36pm Permalink
I can't say enough good things about the Tacoma. I am on truck #4 and waiting for the 2016 to arrive this fall. You buy one drive it hassle free for 5 years. Then trade it in and get a great trade in amount to use on a new Tacoma. Hope Chevy and GMC aren't to disappointed when there trucks don't make a dent in Tacoma sales.lol Its all about looks,dependability, reliably and resale and Tacoma's have all of these covered.