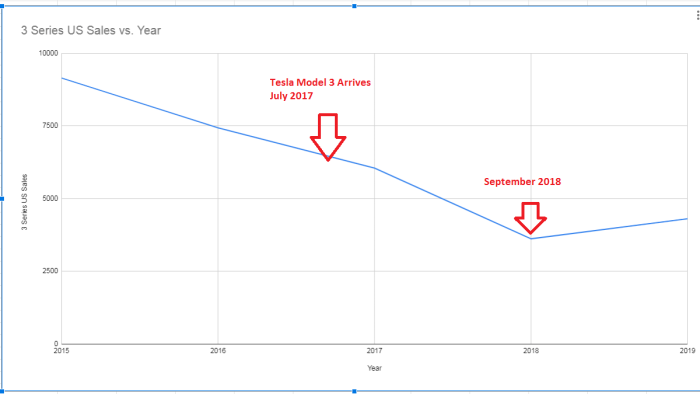 The Tesla Model 3 appears to have had an impact on BMW's sales. But not the way Tesla fans imagine.
Advertisement

The Tesla Model 3 has had a segment-changing effect on sales. One might assume that the incredibly-high sales that Tesla has posted with its Model 3 in America would be devastating to the brand and model that defined that segment prior to Tesla's Model 3 arrival. The impact is significant, but a look at some data reveals some interesting facts. Starting with the fact that BMW's sales are higher today than at the time of the Model 3's arrival. 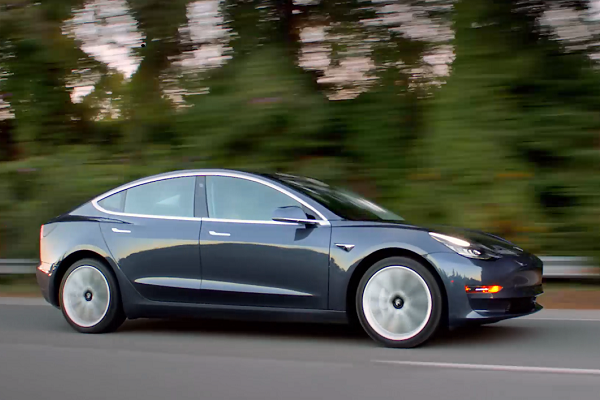 BMW 3 Series Sales History
The chart at the top of our page shows the change in monthly sales of the BMW 3 Series sedan line in America. Note that the X-axis (bottom) is time-stamped by September sales of each year indicted. In other words, the "2015" indicates the sales level of the 3 Series in September of 2015. The Y-axis ( the vertical axis) shows the number of BMW vehicles sold in September of the year indicated. 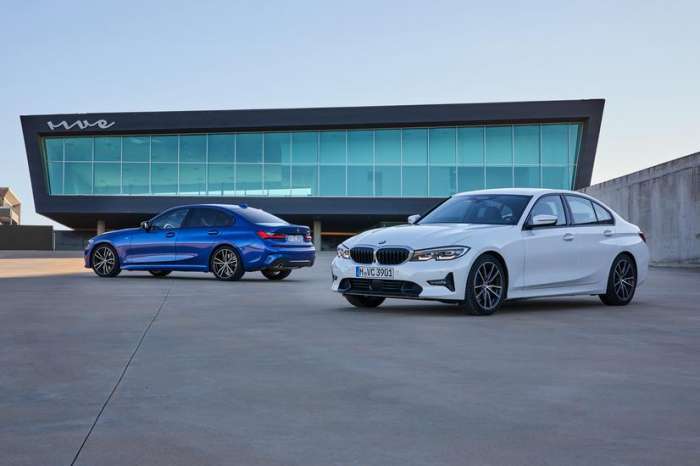 Tesla Impact On Markets
It is easy for one to assume that a new successful model entering into an established market segment will result in a one-for-one loss of sales by a major competitor. However, that is usually not the case, particularly in the automotive world. Rather, the new entrant dilutes the sales of the top seller by a major degree, but the existing model can sustain healthy sales despite the new model. Here, the 3 Series has retained decent sales. Particularly when one considers that the overall trend is a reduction in sedan sales.

Tesla's Impact on BMW Sales - Conclusions
So, in conclusion, Tesla's Model 3 has resulted in a meaningful reduction in sales of the BMW 3 Series sedan. However, the 3 Series remains a top-seller in the segment (number two by our count), and its sales have stabilized. Perhaps more importantly, the BMW brand overall is healthy and it is hard to see any reduction in sales overall at BMW since the Model 3 arrived. In fact, the opposite is true. Since Tesla's Model 3 arrived in July of 2017, BMW's sales have increased meaningfully. Perhaps credit for that goes to BMW's product planners who were wise enough to see signs that crossovers were the future preference of shoppers in the premium/performance segment.

BMW's X3 is now the brand's top-selling model by a wide margin. We'd like to ask our readers what impact they think the new Model Y crossover from Tesla will have on BMW's sales when it arrives. Let us know in the comments below.

Note: MINI brand sales have been excluded from this analysis.

DeanMcManis wrote on October 7, 2019 - 5:41pm Permalink
I think that there is more at play with the 3 Series sales than just Tesla's influence, even though it clearly had a strong impact. When Model 3 buyers were polled to see what cars that they had owned before, there certainly were quite a few BMWs, Mercedes, Audis and such, but the big surprise was that more Model 3 buyers came from owning a Honda Civic/Accord, Ford Focus/Fusion, Toyota Camry/Prius before they bought the Tesla. It seemed that after most buyers were replacing economy cars, many owners were predictably replacing performance and luxury cars. But the Tesla sales have been taking business from a wide spread of competitors. Which is one of the reasons why most every automaker will be offering hybrids/PHEVs and BEVs in their model lineup in the next 2-3 years. As for the reason why BMW's 3 series slumped and rose back up, I think that the drop was affected by Tesla and a general new car sales decline, but it was also part of the normal automotive product cycle. BMW's Sixth generation (F30) 3 series had been mostly unchanged since it's 2011 debut, and sales predictably slowed over the years, especially as the market shifted from sedans to crossovers and SUVs. As for the rise in 3 Series sales, Oct 2nd was the unveiling of the Seventh generation (G20) 3 series, which was a sales success. The reviews of the previous 3 Series cars were not so rosy, but BMW listened to their buyers and revamped the newest model to have better road feel and subsequently better driver enjoyment. I think that the fact that many automakers have ditched their new sedan models left an open market for BMW to exploit, because they have long had a reputation in building superior performance/luxury sedans, and despite recent trends the 3 series sales shows that there is still a thriving market for those cars. Still, even though BMW happily kept and improved their sedans, they also followed the market in expanding their CUV/SUV models, with similar improvements across their line up. I do however believe that they do need to brace for the impact of the Model Y's introduction, which should hit the world auto market as hard as the Model 3's introduction did in the U.S., with record breaking sales next year. Of course the EV market is poised to gain momentum in a big way over the next two years, and EV competition will only get stiffer as the bigger automakers release their own EVs. I think that (like before), the gas companies will hike up gas prices approaching $5 per gallon, and that there will be a backlash against the recent truck/SUV trends, and there will then be a swing back towards new Hybrids, EVs and PHEVS.
John Goreham wrote on October 8, 2019 - 9:53am Permalink
Great insight on the 3 Series generational change Dean. Thanks for adding that in. I'm testing one today and trying (hard) to come up with some positives angles on what the car offers for $58K. Some days the job is harder than others :)
Terry Woram wrote on March 8, 2020 - 3:43am Permalink
Interesting take but disagree that gasoline companies want to hike prices to $5 a gallon and kill their demand. California gas prices have blown out due to aggressive new taxes, a ‘cap and trade’ sin tax, costly refinery formulation mandates by CARB, terminal tankage constraints limiting fuel imports creating an ‘island market’ with price spikes at the slightest supply upset. CA politicians want to kill gas demand, not fuel suppliers, and these Dems don’t care if it drains your wallet. Their attitude-‘Just buy a Tesla’. That’s why CA gas prices are almost double the rest of US.