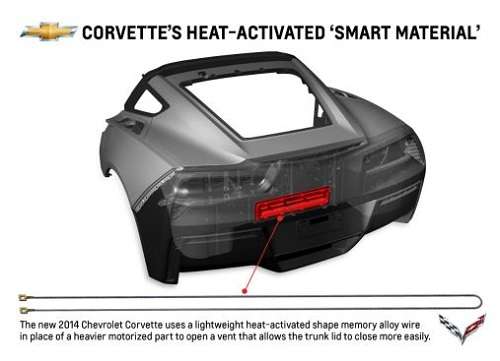 Chevy engineers have made some stunning advances in material science that now offer weight savings, and simplicity in the 2014 Corvette Stingray.
Advertisement

Why does a small wire on the 2014 Corvette Stingray matter? It matters because General Motors engineers worked for 5 years, and spent millions of dollars to find a way to reduce the weight of its vehicles. They have succeeded not just on the Corvette, which is a low volume car, but on many other of the GM products we see next to us in traffic. This task went well beyond the obvious ways, which are pretty much figured out.

Chevy engineers knew that the seal of the Corvette’s passenger compartment was so good that when the cabin was warm the trunk lid would be hard to close. The air acts as a cushion. The standard way to get around that is to use a motor to open a vent when a trunk or other door is opened. Then after the trunk is closed the motor closes the vent. If you have a luxury car you may notice this. Your driver’s door may move the window glass up and down a smidgeon as you open and close the door. That allows the air to escape and the door shuts more easily. On a car door the window already has a motor, but trunks don’t, so there has to be an added motor. Chevy wanted this extra weight out of the ‘Vette. So they came up with a novel solution based on material science.

People are familiar with bi-metallic strips. Simply, they are a strip of metal back-to back with another. When heat is applied, the difference in thermal expansion of the differing metals causes the strip to curl. This is how old thermostats worked. The wire that the C7 Corvette engineers used is similar. When heat is applied via a small electrical current, the wire gets longer. When it is free of the electrical current it shrinks back. This can be used to open and close a vent. Jon Lauckner, GM’s chief technology officer put it this way; “Smart materials like shape memory alloys offer new possibilities for many movable vehicle features. These new materials enable innovative designs and new and improved features at a lower cost than traditional motors and actuators.” Paul Alexander, GM smart materials and structures researcher expanded on that saying “The shape memory alloy used on the new Corvette represents nearly five years of research and development work on smart materials for which GM has earned 247 patent, and it is just the beginning. We have many more smart material applications in the pipeline that will bring even more improvements to our vehicles going forward.”

The 2014 C7 Corvette is full of technical advances. Click here for a full report. However, the Corvette has a long history as this link explains. Interestingly, it isn’t just the Corvette, but all of Chevy’s cars that can benefit from this type of materials research. Even the low cost Sonic and Cruze benefit from the research.