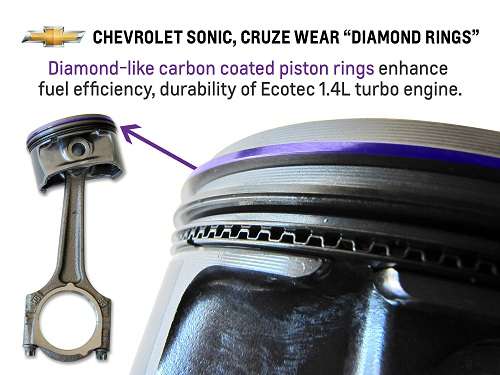 Chevy is using supercar high technology to improve the durability of the Cruze.
Advertisement

The 2012 ChevySonic and Chevy Cruze will soon introduce super-car technology to the masses. When the Maserati Grand Sport added a diamond-like coating to its Ferrari-designed engine parts to improve durability and performance few people were surprised. On the contrary, when Chevy announced in a press release that it would use diamond-like carbon coatings (DLC) in the new Chevy Cruze economy car it caught the attention of car enthusiasts.

Chevy Cruze and Sonic Important To the New GM
As small, entry-level cars like the 2012 Chevy Cruze began to become more important to automakers for political and branding reasons, more and more interesting and high technology methods to produce them are being employed. For many decades the medical, aerospace, semiconductor, and surprisingly, the consumer health and beauty aids markets have employed coatings. The general idea is to use a less expensive, more easily workable “substrate,” or underlying material, too keep costs down and enable fast production, but then apply a thin coating of more expensive, or more difficult to work with material afterwards to achieve the goal. Take for example a razor blade. The entire blade could be made of a super-hard material like titanium or diamond-like carbon, but those materials are extremely hard to machine, and can be brittle compared to steel. By making the part from steel and then applying a thin coating over that that provides the desired effect, costs are controlled and performance is improved.

High Technology In A Surprising Package
Had Chevy introduced this material on the new generation 2014 Corvette few would have been interested, but the fact that the company’s pocket-rocket 2012 Sonic, and compact economy car Cruze, will be the first Chevy products in history to use this technology shows where GM is focusing its attention. The material will be used on the 1.4 liter turbo engine that powers these two new success stories for GM. In an engine, the sealing between the piston moving up and down inside the cylinder is a critical area. Oil actually creates the seal and also provides lubrication. However, the piston itself cannot be used to enable the seal. Rather, rings are used. It is on these rings that Chevy uses the DLC. The coating improves the heat transfer characteristics of the rings, and actually allows the rings to be a little looser. This reduces friction which improves fuel economy and power and also saves on oil consumption. The technology of piston ring, oil and cylinder wall interaction is now studied to the atomic level. By employing this new technology all aspects of that interaction are improved including durability and cost to manufacture.

The 2012 Chevy Cruze and Sonic have broken a new technology barrier for Chevy and are highlighting which products GM is looking most closely at.