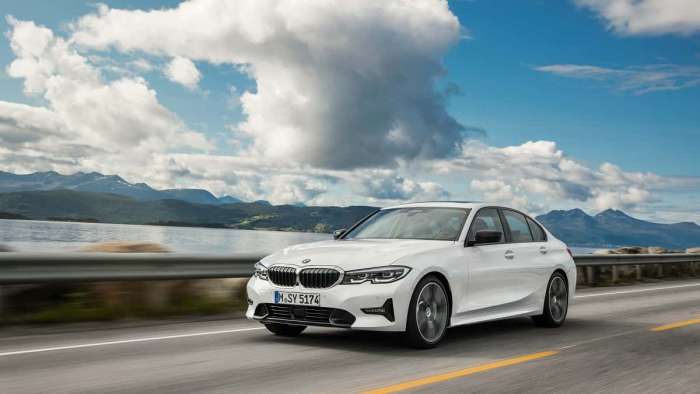 A new study by the Highway Loss Data Institute shines a light on which driver assist systems make the biggest differences in safety.
Advertisement

The Highway Loss Data Institute (HDLI) has completed a new study of the effectiveness of the driver-assist safety systems featured in BMW vehicles from model years 2013-17. The study was comprehensive, having a total exposure, or sample size, of nearly 6 million insured vehicle years.

The main conclusion of the study is that the newer, more advanced systems offered by BMW result in "...large reductions in the frequency of property damage liability and bodily injury liability claims." In other words, the active safety systems in BMW cars will mean drivers have lower insurance claims costs. 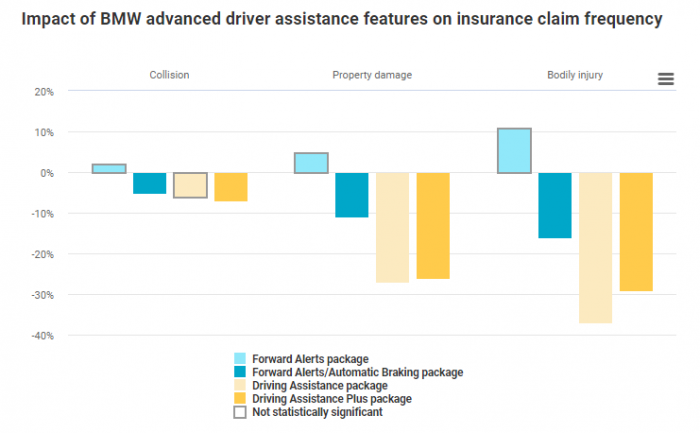 "The crash claim frequency reductions for BMW's Driving Assistance package are the largest we've seen from advanced driver assistance systems, which suggests crash avoidance may be delivering bigger benefits as the technology improves," says Matt Moore, senior vice president of HLDI. "The lane centering that comes in the 'plus' package doesn't seem to augment these benefits. That may be because the system is only intended for use on freeways, which are comparatively safer than other roads, and only works when the driver switches it on."

BMW Forward Collision Prevention and Adaptive Cruise Control
BMW's forward collision prevention can help prevent an accident, and can also help make an accident less severe in some cases. It is coupled with adaptive cruise control which allows a driver to follow a car in front of them and match its speed. However, the study found that there was a vast difference in the effectiveness of the BMW active safety systems depending on which the driver had. There are multiple versions.

Lane Centering Is Not A Safety Feature
Although the BMW advanced safety package does an admiral job of helping to reduce accident claim costs, one feature had no meaningful impact according to Matt Moore, senior vice president of HLDI. "The lane centering that comes in the 'plus' package doesn't seem to augment these benefits. That may be because the system is only intended for use on freeways, which are comparatively safer than other roads, and only works when the driver switches it on."

Read more details on this study at the HDLA website.

If you are shopping for a new or used vehicle, how important are active safety systems to you? Tell us in the comments below.

Jimmy Dinsmore wrote on April 20, 2020 - 12:36pm Permalink
Lane departure/centering is the single most annoying feature on today's modern vehicles!
John Goreham wrote on April 20, 2020 - 12:46pm Permalink
One of the only things I don't like about my Forester is that I cannot shut off the lane departure warning. And I purposefully added the driver assist package to get the forward collision prevention.
Mark Day wrote on April 20, 2020 - 8:45pm Permalink
Every auto manufacture has managed to include "safety" features that are both ineffective and annoying. Until I can order a la carte, avoiding the annoying, I'll not be purchasing their undesirable, irritating, vehicles. Don't understand why a knowledgeable auto journalist (JG) would do otherwise.
John Goreham wrote on April 21, 2020 - 10:09am Permalink
When EyeSight came out it was the first really effective forward collision prevention system in an affordable vehicle. It is also the best system at any price in many comparison tests. So, in 2016 I paid about $27K for a car with a technology I wanted. Sadly, I had to take the lane departure system (which I call "Beep-You should have killed the jogger") with it. I also had to take a huge panoramic sunroof, which I do not prefer, to get the heated seats and windshield. I do wish I could pick and choose only what I want. No manufacturer of affordable cars offers that in my experience. It's a bummer.
Mark Day wrote on April 22, 2020 - 12:15am Permalink
Perhaps the new Subarus, and others, should have, as standard equipment, a large roll of electrical tape. A friend recently purchase a new Subaru and has been busy taping over various sensors to stop the nagging. I'm not buying new, with or without the roll of tape.