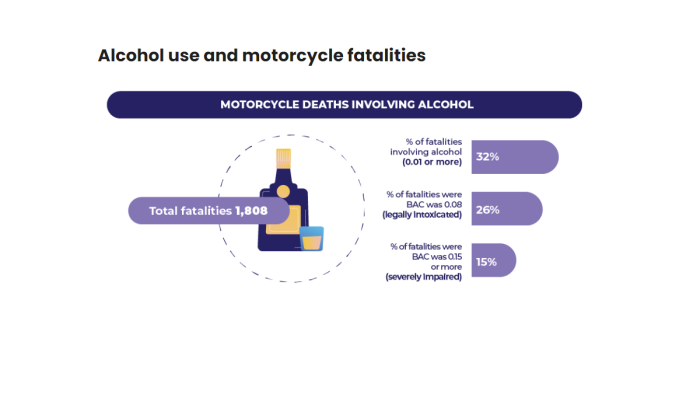 New statistics about motorcycle deaths prove that reducing deaths is not complicated. And helmets are not the answer.
Advertisement

The secret to reducing motorcycle deaths is to stop drunk driving. It’s that simple. About one-third of fatal motorcycle accidents involve a driver who has been drinking and driving. A new study by QuoteWizard by LendingTree shows just how damaging alcohol is to the riding community.

The study dug a bit deeper into the effect that alcohol is having on motorcycle rider deaths in America. The study data showed that 26% of fatalities involved someone who was legally intoxicated, and in 15% of cases, the person killed had a blood alcohol content (BAC) level nearly twice the legal limit. If only the individuals so drunk that they measured twice the legal limit were removed from the fatality lists, nearly one thousand riders per year would not have perished.

Alcohol-related motorcycle deaths are also not even close to uniform across America. In Massachusetts, 25% of fatalities with BAC over 0.01. While this is still a disturbing number, bordering Rhode Island has a rate more than twice that of 54%. Rhode Island’s percent of deaths in which the rider had a BAC of twice the legal limit is triple that of Massachusetts.

Geography plays no role in the alcohol-related alcohol deaths in America. The study found that Wyoming, Rhode Island, Montana, and Alaska had the highest numbers of fatal crashes where someone was legally or severely intoxicated.

Statistics are interesting in that one can draw their own conclusions. Although studies have found that helmet use reduces the rate of severe head injuries and death, more riders are killed in America wearing a helmet than not wearing one. This seems to support the idea that helmet use does not correlate with increased survival in a crash, but does it? 18 states require helmets.

For more details on the tragic rate of motorcycle fatalities in America, view the complete QuoteWizard study data here.

Tesla Contemplates A New Strategy for China Retail even As Sales Boom
Jay Leno on Elon Musk & EVs: “I Think He Should Get ... Credit"
END_OF_DOCUMENT_TOKEN_TO_BE_REPLACED