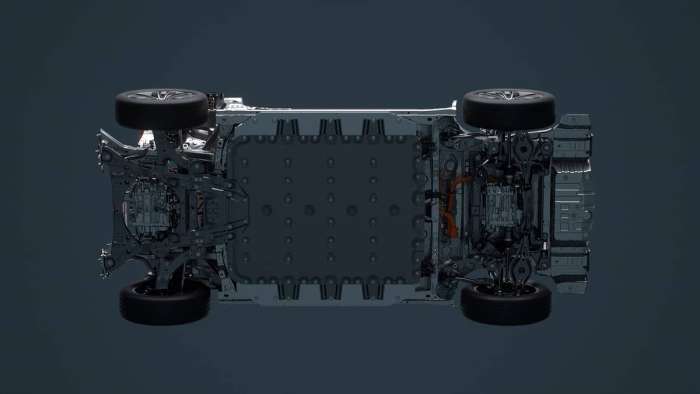 Toyota’s new third-generation crossover will benefit from one of Subaru’s biggest strengths.
Advertisement

What is XMODE
Subaru’s XMODE is an AWD system that enables a vehicle to handle more than one type of condition. For example, while many vehicles offer just one AWD setting and many more offer a few, Subaru’s XMODE offers a standard mode plus two more for snow and deep snow conditions. Experienced Subaru XMODE owners know that in conjunction with enabling or disabling traction control, an XMODE-equipped Subaru crossover offers a wide range of AWD choices for a driver enjoying a drive in inclement weather.

Toyota’s Electric AWD
Like its current EV crossovers now on the market, the new bZ will feature an AWD system that has no drivetrain connection from front to rear. Rather, separate motors will drive the front wheels and rear wheels. This system is now mature at Toyota having been used on multiple generations of electrified vehicles. The benefits include improved reliability and reduced maintenance by comparison to conventional mechanical AWD systems. Also, the floor of the vehicle can be flatter, and the battery tray can be lower in the vehicle, helping to lower the center of gravity of the vehicle which improves handling and safety.

Related Story: Subaru Solterra With X-Mode Is No Big Deal - Why Fans Want A Wilderness Trim

Toyota’s Expected MODES
Toyota said during the global reveal that its new Subaru-derived AWD system will feature XMODE with snow/mud, deep snow and mud (below 20 km/h), and Grip Control for off-road driving in tough conditions (below 10 km/h). These will likely augment standard mode, Sport Mode, and ECO mode settings for the powertrain.

Will Toyota borrowing XMODE from its partner Subaru make you more likely to try Toyota’s fourth-generation EV crossover? Tell us in the comments below.

Tesla Giga Berlin's New Hurdle: It's Not Only the Gov't, but Now Tesla Itself
Teslas Are Sold Out Until 2023, But The Timing May Reverse
END_OF_DOCUMENT_TOKEN_TO_BE_REPLACED