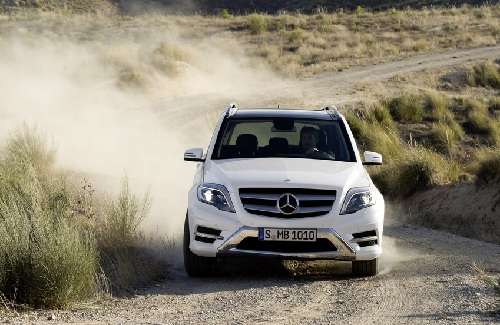 The 2013 Mercedes-Benz GLK has been thoroughly restyled and has received some important updates to make it more competitive with rivals.
Advertisement

Mercedes-Benz works to keep their entry level vehicles anything but common. The GLK is Mercedes-Benz’ least expensive and smallest sport utility vehicle, but it has the class and ruggedness needed to compete well in the luxury small SUV market. Competitors are trying to gain share in that part of the auto market. Porsche is introducing an all new SUV to the segment called the Macan. Setting aside the name, the new Porsche will make the segment, which already includes the Audi A5, BMW X3, VW Tiguan, and the stunning new Range Rover Evoque, a hard place to be special. The Porsche will step up the sport from the already solid underpinnings it shares with the VW and Audi, making it hard to be the “Sporty” entry level SUV. The Evoque clearly has the style and economy niche in its sights.

Among the style changes Mercedes-Benz has made are a new sleek body that the company calls “tight-taught- and compact body.” Perhaps some subliminal messages there for a certain gender who often chooses these cute-utes? The style is not dramatically different from the 2012 but does look fresher. The interior also receives some updates. One the equipment side there are two main improvements. First, the gasoline engine in the ‘350 has increased in power from 268hp to 302. That is a pretty sizable jump and it may be mainly attributed to the switch to Mercedes-Benz’ third generation direct injection. This type of fuel management system typically increases fuel efficiency. Though numbers are not yet released, expect a bump up there. In order to further improve fuel economy, the engine now has an auto stop/start feature called, creatively, “ECO.”

Mercedes has focused on family usefulness, sporty nature, safety and technology in it marketing of the GLK, taking a rounded approach, instead of seizing on one aspect of its functionality and playing to that strength alone.

Clearly the 2013 Mercedes-Benz GLK is trying to carve out the wealthy family fun runabout niche for itself and the new style, power, and efficiency changes will help.