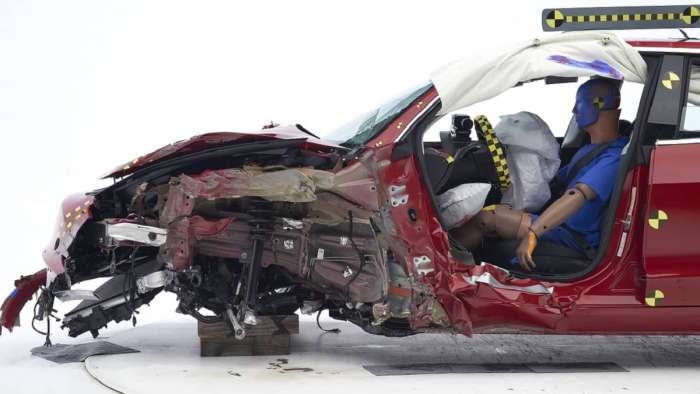 If you are a fan of the Model 3 like we are, you may have noticed that the car IIHS crashed was a pricier trim. Here’s why they chose that specific option combination.
Advertisement

The Insurance Institute for Highway Safety (IIHS) recently awarded the Tesla Model 3 its highest award level, the Top Safety Pick Plus. If you follow the Tesla Model 3 closely, you may have seen the crash video and noticed that the car the Institute crashed was far from the least expensive trim offered. Rather than a white Standard Range, the folks there selected a Red Mid Range. Since IIHS needs multiple vehicles for its tests (up to 6 gets destroyed), this is a pricey choice on the group’s part. IIHS buys the cars it crashes, so we reached out and asked by the least expensive Model 3 wasn’t their pick. 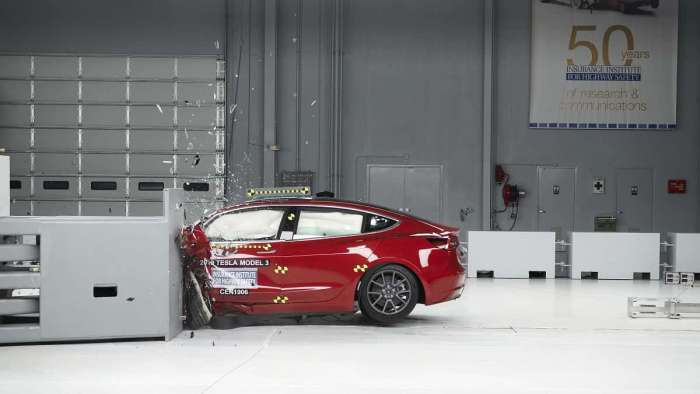 A Bit About Tesla Trims
You may remember that the “Mid Range” Model 3 was offered from roughly November of 2018 through roughly the end of March 2019. Tesla didn’t make any of the shorter-range “Base” or “Standard Range” Model 3 cars until well into 2019. We assumed that the pick of Mid Range was strictly due to availability, but in fact, IIHS chose it on purpose. To understand why, we need to remind readers of a Tesla crash test of another model, the Model S. When IIHS crashed the Model S the second time, the group noted that there was intrusion on the battery pack area. Although no actual batteries were impacted, had that car been a long-range version, IIHS concluded that they may have been. So, learning from this, IIHS opted for the Mid Range, rather than the cheaper Standard Range. The group wanted to be certain that it tested the “middle” of the product line, not the cheapest with a possibly smaller battery. This is not speculation on our part, IIHS explained it to us in phone and e-mail communications. 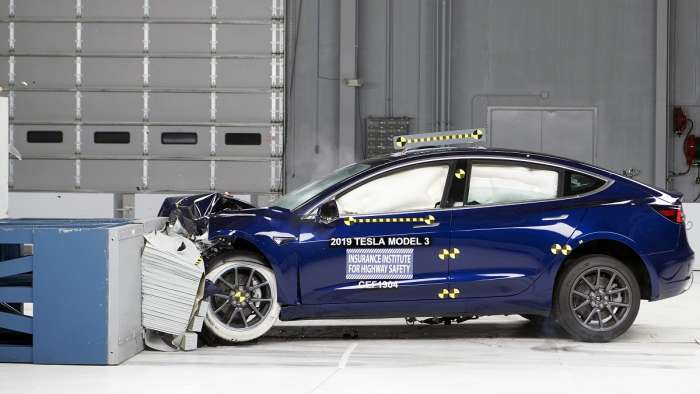 Colors Cost Extra With Model 3
At a glance, you can see that IIHS also made an expensive choice of color. Tesla charges $2000 for the red paint on two test cars. The blue Model 3 cars that IIHS used in the standard offset frontal crash and side-impact test were also a pricey pick. That is a $1,000 option. White is the only no-charge option (in our zip code at least). So why did IIHS opt to spend $6,000 on the "fancy" paint for crash-test cars? The answer has to do with videotaping and photography. Joseph Young of IIHS told us, “Indeed we chose the blue and red cars for our cameras. Our crashworthiness team regularly consults with our video editor on vehicle color (exterior and interior) choice in order to provide the best visuals in our video materials.” 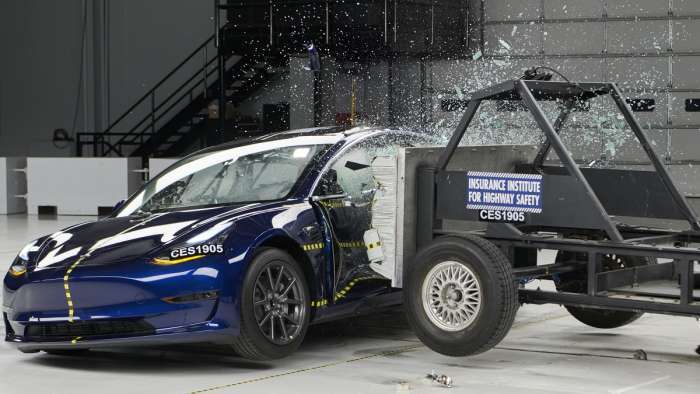 Multiple Teslas Used In Testing
If you check out the images or video of the roof crush testing, you will see that the red Model 3 is not the same trim as the one in the small frontal overlap crash video. The cheaper rims are the give-away. Here, IIHS did choose a less expensive trim, since the roof test does not impact the battery area. Again, a high-impact color is the choice so fans can get a better look at the action. 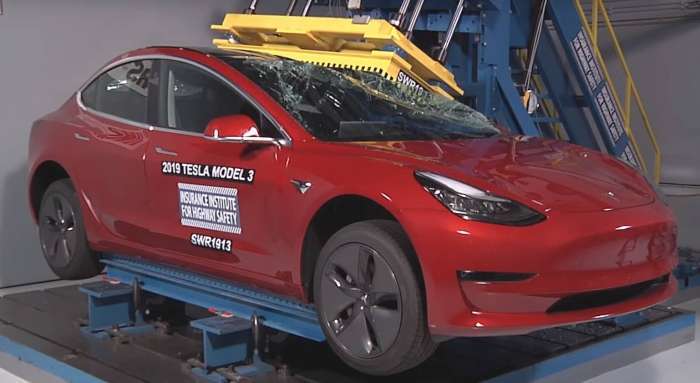 Why Aren't There More Car Crash Images?
One last tidbit; If you are wondering why there is no video or images available for the passenger side crash testing, it is because IIHS used Tesla’s data for those ratings. “The passenger-side small overlap crash test was performed by Tesla as part of our verification test program,” said Mr. Young. “The data and video were provided to us and a rating was assigned based on that. This is why we don’t have video or photos of that test vehicle.”

Do you have questions about IIHS or any other safety topics? Let us know what you want to be researched in our comments section and will do our best to uncover answers.

DeanMcManis wrote on September 20, 2019 - 3:09pm Permalink
Interesting tidbits about the model and color choice John. With regard to the rims, those are all the standard wheels on all of those cars. The difference is that the red car that gets crushed has the aerodynamic wheel covers (hubcaps?) mounted as they come from the factory, and the others have the covers removed. I like the look of the rims without the covers and many people remove them, trading slightly higher aerodynamic drag for a cooler look of the bare rims.
John Goreham wrote on September 20, 2019 - 7:52pm Permalink
Dean, Thank you for pointing that out. I appreciate it. Now, I'm wondering why IIHS removed them.
DeanMcManis wrote on September 21, 2019 - 6:25pm Permalink
There is probably a factory option to delete the wheel covers, and it might be a logistical thing (like the red and blue paint) that the open spoke wheels photograph better at high speed. Plus it is doubtful that the wheel covers would have any real effect in the outcome of these tests.
John Goreham wrote on September 23, 2019 - 11:02am Permalink
I'm wondering if they remove them so they don't fly off when they impact the barriers.