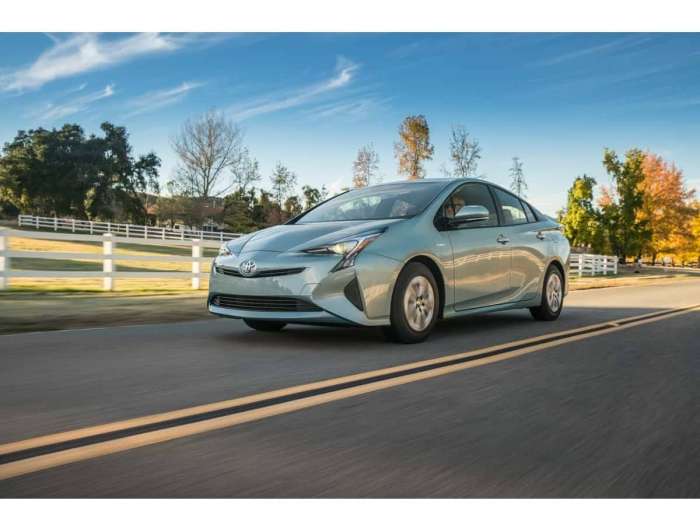 The Toyota Prius Hybrid has advantages other green cars don't share when it comes to ride-sharing.
Advertisement

As ridesharing becomes more and more a part of daily life in the United States, Uber and Lyft are trying everything possible to shift the vehicles that some of its drivers use towards green cars. The high-end vehicles that are used as airport limos like the gas-guzzling Chevrolet Silverado I recently rode in during one Uber trip are going to start to hurt the company’s image, so it will make a very public show of the green car initiatives that it participates in.

Uber has recently announced a limited program that will encourage drivers to use battery electric vehicles (BEVs) and plug-in hybrid electric vehicles (PHEVs). Uber, along with local municipalities will subsidize fares to help make it more financially viable for its drivers to use the battery and partially-battery-powered vehicles. This effort may win out long-term, but for Uber drivers not in these limited pilot program areas, a pre-owned Toyota Prius remains one of the best options for maximizing profits and minimizing downtime.

Although Toyota Prius vehicles maintain their value dramatically better than competitors’ electric vehicles, they are still affordable after the initial depreciation period of about three years has passed. NADA data shows that a three-year-old Prius sells for roughly 46% of its original value. So, three-year used Prius cars can sell for between 13K and $15K depending upon the trim, mileage, and condition of the vehicle.

Even Prius cars from four model years ago earn an EPA-estimated 50 MPG in the City. That makes the cost for energy to operate a Prius very close to the cost for EVs in some key EV-targeted markets with high electricity costs, such as the greater Boston area. With a cost per mile for energy of only six or seven cents, the Prius is one of the most cost-effective vehicles in the world to use for one’s business. Which is why the Prius is a popular delivery vehicle.

Coupled with the Prius’ low cost per mile is its low cost for maintenance and repairs. With no timing belt, no power steering fluid to change, and having been designed for long life, the Prius has a cost of maintenance that is lower than many electric vehicles.

Unlike all affordable EVs, a Prius can operate through a full work day and never need to be refueled. With a range of over 570 miles, a 2015 Prius can operate in city conditions as a ride-share vehicle for over 20 hours without stopping to add energy. A 2015 Nissan Leaf, by contrast, can operate only about four and a half hours in the city before being down for as long as an hour to recharge back to full on a fast charger (if available). The refueling time for a Toyota Prius driven 1,000 miles during a week of ride-share operation is under ten minutes. The recharging time for a Nissan Leaf driven 1,000 miles during a week of ride-sharing work is about 500 minutes assuming zero wait time at an available fast-charger.

We reached out to Jesse Rudavsky for some perspective on what an experienced rideshare driver might consider a promising newly-released plug-in vehicle. Jesse is a contributor to Torque News and uses a Prius now in his ride share work. Jesse told us, “The Ioniq PHEV is a good plug-in option since it seats five, but long-term reliability is unknown. I would more likely go with the Clarity from Honda. It also gets 47 mile EV range, seats 5 like the Ioniq and is a bigger and likely more reliable car.” He also knows that some drivers have started to use electric vehicles in the work, and suggests, “If you have an EV and are doing it full time, it is best to be able to wake up with a full charge.” Why does Jesse not suggest the Prius Prime plug-in hybrid electric vehicle? Simply because that version of the Prius is a four-passenger car.

As electric vehicles continue to mature they will become an ever-increasing part of the mainstream car culture in America. Subsidizing their use in ride sharing is a noble idea, but it does not change the fact that hybrids achieve many of the same environmental goals while enabling greater uptime while operating with a lower cost per mile.