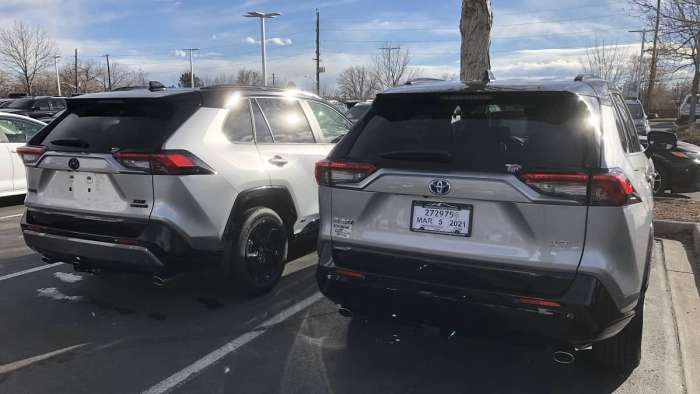 Dealer markup horror stories are easy to find. To find out what buyers actually pay is a bit more difficult. Here is what the owners of Toyota RAV4 Hybrids we polled told us that they paid.
Advertisement

Visit any social media club related to vehicles and you will easily find popular posts related to horrible dealer markups. A shopper or a person in for service browsing inventory sees a window sticker with a big markup, snaps a cellphone image, and the narrative becomes, “This model has a $10K markup!” Maybe. But maybe if you actually shop for the model by visiting multiple dealers you will find that the true cost is right around MSRP or even lower. 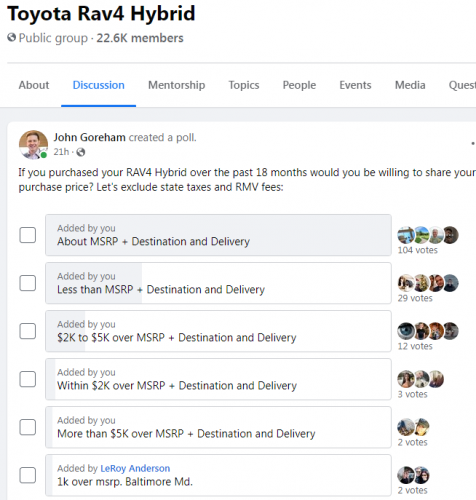 We polled the 22,000-member Toyota RAV4 Hybrid club members on Facebook to see what they said they paid for the vehicle they purchased over the past 18 months or so. The vast majority paid MSRP plus destination and doc fees. Roughly one in four of the respondents say that they paid less than MSRP. About one in ten said that they paid over MSRP.

This report by owners doesn’t elicit the emotional response that the dealer markup posts do. Many of us are looking for the next thing to be outraged by and dealer markups are easy to understand. It’s downright “unlawful, despicable, unethical, immoral, and insulting” for these mean dealers to charge more than MSRP, Of course, if they want to charge less, that’s OK. No moral outrage for the dealers who offer to sell you the vehicle for less than the manufacturer suggests they do.

We’d love to bring you hard data from Toyota or its dealers on exactly how many owners paid more than MSRP and how many paid less. However, all manufacturers and dealer groups keep that close to the vest. They are not in a big hurry to tell you what folks pay for them. What’s the upside?

But when we poll owners, many vote, and then they also offer up a comment. For example, one owner wrote, “I paid just a couple hundred below MSRP…And as a bonus, I got about 3000 more for my trade and then I paid for it a year ago.” That owner had more details, but we’ll let you join the club to see it all.

Another owner points out that just because a vehicle is posted with a markup, it doesn’t mean you cannot negotiate. Some post what the markup on the sticker was and the lower markup they settled on after they negotiated.

Other owners point out their state. We think from participating in many polls of this type that the state makes a difference. Subjectively, it seems like the state with the biggest green vehicle push, strictest mandates, and biggest subsidies and special treatment of green vehicle owners, California, also has the biggest dealer markups.

If you purchased a Toyota RAV4 Hybrid in the past 18 months or so, feel free to comment on your experience below. If you do, please include some details like the state in which you took delivery and the trim you opted for.