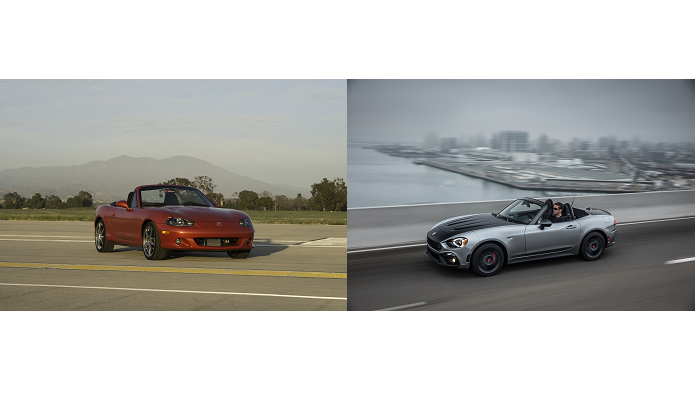 The Gen-2 MazdaSpeed Miata had a turbocharged engine, six-speed, and excellent handling. How would it compare to today's 2017 Fiat 125 Spider?
Advertisement

The MazdaSpeed Miata from the second Miata generation, called NB by fans and owners, was special. The NA and NB generation Miatas were not quick in a straight line, nor was it their mission to be. However, owners and fans of sports cars always want increased performance, and the MazdaSpeed Miata delivered. Since the new Mazda Miata has proven itself to be quicker than the new Fiat 124 Spider, and yes, even quicker than the Abarth version, we thought it would be interesting to look back and see if the MazdaSpeed Miata from the early 2000's could hang with a car two generations newer. For those that have not seen it yet, it is worth looking back at our article that established the current benchmark in this class, the ND Miata - The 2016 Miata Is Quicker Than What Car?

2017 Fiat Spider - Performance Chops
The new 2017 Fiat 124 Spider is a great car. It is not only great as a grand touring and weekend getaway car in all of its configurations, we took it on-track in the Abarth version and found it to be a blast on a racetrack as well. The Spider has great brakes, handles well by any measure and it is fun to drive in every setting.

Since handling is so subjective, it is impossible to name one car "better" than the other. Sure, we could look at skidpad data and give one the edge. Except that in street cars like these sliding is fun, so why would one that has a minor advantage over another be "better?"

We can, however, state with some confidence which is faster in a straight line. In the case of the Fiat Spider, Car and Driver has recorded a 6.7-second 0-60 MPH instrument test time in the Abarth trim with its slight horsepower advantage. 6.7 seconds is not bad for a car of this type, but the current Miata has done it in 6.2 seconds and 5.9 seconds in two separate Car and Driver tests.

With the Spider Abarth's 184 hp compared to the 178 hp of the 2004 MazdaSpeed Miata, the matchup looks to be close.

NB MazdaSpeed Miata Performance
In 2004 Mazda gave Car and Driver an early version of the MazdaSpeeed Miata and asked them politely not to break it. Car and Driver listened and then recorded a 0-60 MPH blast of 6.7 seconds without trying hard. So the matchup between the NB MazdaSpeed Miata and 2017 Fiat 124 Spider Abarth is a tie, right? Not so fast. We feel it is only fair to tell our readers that MotorWeek tested the MazdaSpeed Miata with no restrictions and logged a 7.1 second 0-60 MPH time. MotorWeek tends to have the slower times among all the major publications that do instrument testing, but still, a data point from them is more than valid.

For Some Former Daimler Managers Daimler Is Authority, While Tesla Is Like a Startup
How Daimler Unintentionally Subsidizes Tesla Giga Berlin
END_OF_DOCUMENT_TOKEN_TO_BE_REPLACED