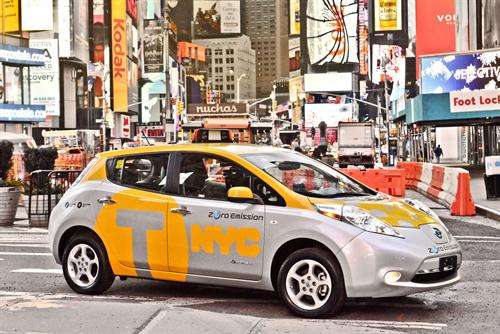 In 2011 Mayor Bloomberg proudly announced that the City of New York would begin testing 6 Nissan Leafs as part of its goal to electrify about 30% of its taxi fleet by 2020. Today Mayor Bloomberg made that same announcement again. As before the program is slated to begin “this spring.” The 2011 announcement had the same projection, but for the spring of 2012. Better late than never.

Interestingly, the City of New York has only recently completed its vetting program for the “Taxi of Tomorrow.” The multi-year study looked at a way to move on from the no longer in production Ford LTD, rear drive, gas guzzler that has for so many years been the staple of the taxi fleet in the Big Apple. New York created a set of parameters it wanted manufacturers to meet and allowed bidders to propose their best solutions. Nissan was the winner with the NV200 taxi.

The NV200 taxi is everything a passenger in a New York cab could want. Spacious passenger area, easy ingress and egress, plenty of room for luggage and safe, due to its size and shape, the NV200 is a place a New Yorker will be glad to be. The Nissan leaf is very much like that vehicle except it is hard to get into, cramped, has almost no luggage space, and is a tiny little (unsafe?) vehicle by comparison to the other cabs, limos, and trucks vying for the spot the Leaf is rolling slowly and silently towards at the next stoplight.

In this most recent announcement, timed as part of New York's Earth Day celebration, (not to be confused with the same announcement from a couple years ago) Mayor Bloomberg said "Even though the Taxi of Tomorrow won't be on the road for another six months, we're already looking ahead to the taxi of the day after tomorrow. Nissan's proven track record with electric vehicles will put us ahead of the curve in helping us answer important questions about incorporating electric taxis into the fleet so that we can achieve the goal of a one-third electric taxi fleet by 2020." Two years ago a third of 13,000 taxis in New York already had an electric hybrid drive system, so Mayor Bloomberg is very likely to be able to make that dream come true.

Hybrids are ideally suited to taxi service since they can regenerate power during braking to feed their batteries. In addition, they shut off when they are not moving and can move slowly forward with no gasoline being used during stop-and-go situations. They also never require the downtime that electric vehicles do for charging. New York has plans to install several CHAdeMO based quick chargers that will allow the taxis to charge up to about 80% capacity in about 30 minutes. So, the Leafs will have to stop for 30 minutes about every 60 miles of driving or so. A hybrid cab by comparison would only need about 5 minutes refueling time for every 300 miles it travelled.

Commenting today on the re-launched Nissan Leaf taxi plan, Joe Castelli, vice president, Nissan Commercial Vehicles said, "As part of our commitment to zero emission vehicles for the mass-market, Nissan is looking for ways to broaden the use of electric cars, including commercial applications like taxis. Following the selection of Nissan NV200 as New York City's Taxi of Tomorrow, our relationship with the city provides us the ultimate proving ground to conduct this LEAF taxi pilot to help optimize the use of electric vehicle technology for future applications."