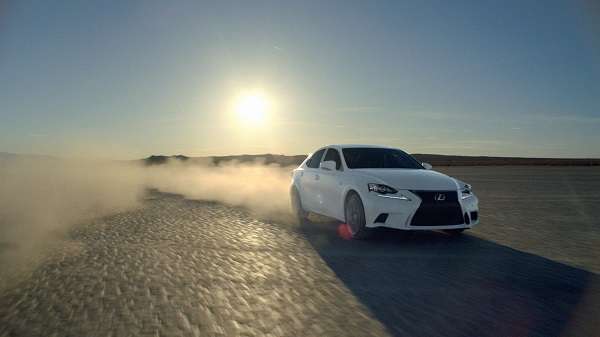 One year ago Lexus launched the new generation of IS 250 and IS 350 sports sedans. Its success has been shocking. Here are its biggest accomplishments.
Advertisement

Let’s be truthful, nobody expected the new 2014 Lexus IS 250 and IS 350 to be so successful. The exterior styling is very polarizing. That was very risky for Lexus, but it paid off. Lexus also went ahead and made very sporty versions of all the 4 ways the new IS can be configured even though it was not a brand known for its sports-car like handling in this class of car historically. Lexus then resisted moving too quickly to small turbo engines, but stuck with its two V6 engines. It all paid off and sales have more than doubled for the rear-drive, 4-door, compact Lexus IS series. Looking back there are really three major things that Lexus accomplished.

Lexus IS Sales Growth Passes Infiniti
Although there are other cars in the BMW 3-Series segment like the Audi A4 and the Mercedes C-class, the Infiniti G37 historically was the real problem for Lexus. Both Lexus and Infiniti offered their cars in this segment for significantly less money than the German trio. So although both of the premium Japanese makes were trying to claw their way up to the BMW sales levels, Infiniti had always been ahead and helped keep Lexus from making big gains. Infiniti earned that because the cars were a great value.

Then, just as Lexus went sportier and edgier with its IS line, Infiniti redesigned the G37 to become the Q50 luxury car. Infiniti’s larger feeling, technical wonder that is the Q50 is not at all a bad car. In fact it is amazing. It just isn’t a sports-sedan anymore. It is more than that. And that market is smaller. Had Infiniti made the replacement for the G37 an edgier, more driver-oriented vehicle, Lexus’ success this past year may not have been so dramatic. Sometimes great races are won by a new champion when a former great stumbles. In any case, in June the Lexus IS line passed the combined sales of the G37 and Q50 (and Q60 coupe if you want to throw that in as well). That gap is looking like it will widen now.

Lexus IS Beats BMW 3-Series In Important Comparisons
When Torque News first tested the new Lexus IS cars back to back with the BMW on and off track we were surprised. The Lexus was the better driver’s car. Not just for the money, but overall. We dutifully reported this and received well written angry-grams form the BMW faithful (who of course had not driven the Lexus). Then Car and Driver tested the IS vs. the BMW (and the remaining field). Car and Driver picked the Lexus. Then Road and Track did a separate comparison. Road and Track picked the Lexus. This is huge. It is like the US winning the world cup. Not supposed to happen. Can’t be possible. But it did happen. And it is real.

Lexus IS Spindle Grill Drives Sales
Look in the comments section under any new Lexus story and you will see that the spindle grill has its haters. Heck, even Motor Trend called the new IS “ugly.” We will forgive them for saying something like that since every single car that Lexus makes saw a big leap in sales when the new styling, exemplified by the aggressive spindle grill, was applied. The GS sales doubled. The IS sales Doubled. Remember, these models had no drivetrain changes. The ES and RX continued to see sales increases. All the Lexus cars saw big leaps in sales after the new Lexus style was applied. Does it have its detractors? Yes it does. However, sometimes to make an omelet one has to break some eggs. Call the Lexus design nasty names if you like, but one word definitely applies. Successful.

The Lexus IS 250 and IS 350 sedans will soon be leaving the 2014 model year and heading into the second year of this third generation of IS cars. From this writer’s vantage point, it seems that year one could not possibly have gone better for Lexus.

Related Stories:
The turbocharged Lexus IS 200t will hit BMW 328i where it hurts
Study finds Lexus about twice as dependable as BMW
Lexus IS outscores rivals on IIHS Front Crash Prevention test