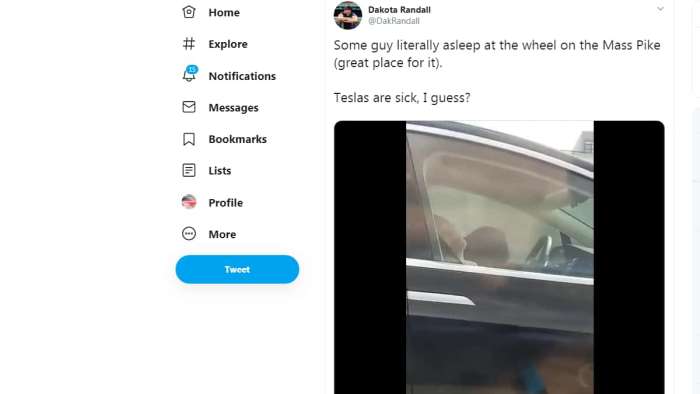 A new video apparently shows two occupants of Tesla on the highway with nobody controlling the vehicle.
Advertisement

Just days after the NTSB released a report in which it - again - points out that Tesla's Autopilot lacks sufficient safeguards to keep drivers attentive, new video and images seem to show a couple seated in the front a Tesla traveling on the Massachusetts Turnpike while both look asleep. Or overdosed. Or dead. You be the judge.

WHDH News in Boston reports that commuter Dakota Randall took the images and video. He also says that he traveled alongside the Tesla with the unresponsive couple in the vehicle "for nearly a minute" honking his horn, but neither occupant stirred.

Some guy literally asleep at the wheel on the Mass Pike (great place for it).

Teslas are sick, I guess? pic.twitter.com/ARSpj1rbVn

Randall posted a 28-second video of the Tesla and also a short text saying, "Some guy literally asleep at the wheel on the Mass Pike (great place for it). Teslas are sick, I guess?"

Many Twitter users quickly called the image "Fake" in comments under the post. Others suggested it was staged, and others pointed out that "sober people don't sleep like that."

NTSB's most recent report on a Tesla crash with Autopilot engaged states, "Data from the crash trip shows that for the majority of the time in which autopilot engaged,the driver did not have his hands on the wheel. In the final segment leading up to the crash, the driver had his hands off the wheel 12 minutes, 57 seconds. (Full report is located at this link)

Past NTSB reports have also seemed to foreshadow more Autopilot crashes. Our story, NTSB 2019 Crash Report Deja Vu- Tesla Model 3 While On Autopilot Drove Straight Into Truck Killing Occupant explains how a lack of Autopilot safeguards was examined by the NTSB proir to other crashes.

An NTSB report from 2017 about a fatal Tesla Autopilot-rated crash stated, "The Tesla’s automated vehicle control system was not designed to, and could not, identify the truck crossing the Tesla’s path or recognize the impending crash. Therefore, the system did not slow the car, the forward collision warning system did not provide an alert, and the automatic emergency braking did not activate."

Our Take:
We have no way to know if the most recent example of a Tesla being operated by Autopilot while occupants were not participating is true or false. There have been multiple reports like this. We do know that Teslas have crashed while on Autopilot killing occupants on multiple occasions and that many more accidents including rear-endings of parked emergency vehicles have happened. As far as we can tell, the NTSB's job is to point out vehicle safety problems, but not to ensure any action to protect the public is carried out.

DeanMcManis wrote on September 9, 2019 - 2:00pm Permalink
Yeah, it is conveniently staged. Either as a joke, or more likely to purposely discredit Tesla. The way that autopilot normally works is that it periodically advises you to put your hands on the wheel if it senses that you have let go. Then it proceeds to start flashing the screen and beep loudly, telling you that you need to take control of the car, then it says that Autopilot will shut down. Then it slowly brings the car to a complete stop in the road, and will not allow you to engage Autopilot again until to steer for yourself. Tesla said that the upcoming version of Autopilot will automatically pull over to the side of the road and stop when there are no hands on the steering wheel, and the driver does not respond for a certain period of time. So this video and others like it are obviously staged. But I still expect to see even more clearly staged videos like this one even with the pull-over autopilot update, because Tesla stock short sellers will do anything to make money. It is pretty easy to make a staged video, edit it, and publish it on the internet.