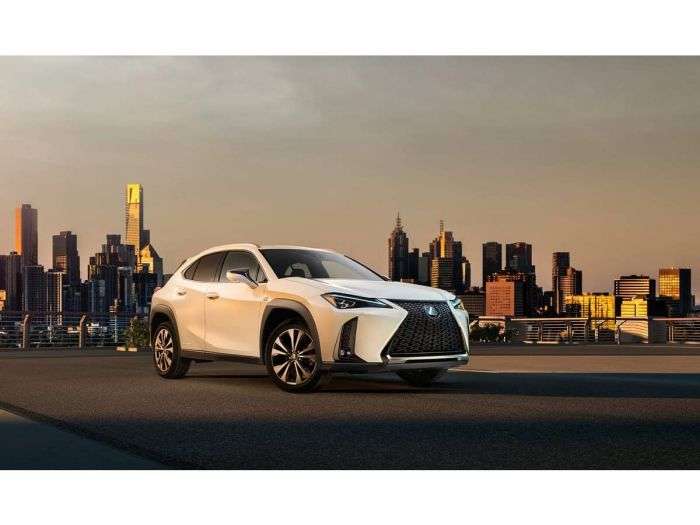 The all-new Lexus UX has an interesting set of specs, particularly the drivetrain.
Advertisement

The all-new Lexus UX compact urban crossover was launched in Geneva this week. This smaller than NX crossover is targeted towards urban drivers according to Lexus, who used the word urban in its title and opening sentence of its first brief press release, and is the first part of the new model’s name. Sticking true to its urban target, the new UX will have two very efficient drivetrains.

The first drivetrain will consist of a new 2.0-liter non-turbo engine. This will be coupled to a geared continuously variable transmission (CVT). Models with this powertrain will be called the UX 200. The new 2.0-liter engine is more efficient than most modern gasoline engines with a 40% thermal efficiency. Advanced technologies used in the engine include high-speed combustion, multi-hole direct fuel injectors, a continuously variable capacity oil pump, a variable cooling system and VVT-iE intelligent variable valve-timing on the intake side. The engine will generate a respectable 168 hp.

The CVT Lexus will use is somewhat unique and the company promises it will have a more “direct” feel. Most CVTs uses two pulleys connected by a belt that can change their radius seamlessly, and thus change the effective gear ratio, without no “step” effect unless programmed to have a step feel. Lexus says its Direct Shift-CVT will use an additional gear set for starting off from a stop. The idea is that the UX will feel quicker and feel more linear when accelerating. The gears reduce the need for the CVT’s pulleys and belt mechanism to be used in the low range which means more of the CVT’s ratio spread can be dedicated to the higher range, maximizing efficiency.

All of that cool tech above is for the less efficient UX. The most efficient model at launch will have a new 4rth-generation hybrid drive. The UX 250h will have more horsepower with a total 176 total system horsepower. Lexus has designed the UX 250h to have “an immediate and continuous acceleration feel.” The UX will use a two-motor system to enable the vehicle to have AWD. A second motor drives only the real axle (like in the RAV4 hybrid and NX hybrid). The UX 250h will use this AWD setup to provide additional power to the rear wheels at speeds under 43 MPH.

Hypermilers take note, Lexus has built in a new program to help those who strive to maximize efficiency. Called Predictive Efficient Drive, the system “analyzes driving habits and the expected road and traffic conditions to optimize charging and discharging of the hybrid battery.” Lexus says that the more the vehicle is driven, the more effective it becomes at predicting driver behavior and will save fuel.

Lexus has not offered an MPG estimate yet, but we predict a 45 MPG Combined EPA estimate.

Richard Burfoot wrote on January 19, 2019 - 11:09am Permalink
I own a CT Hybrid 2013 year Premier model and I enjoy the driving and smoothness of the car. Quality is beyond reproach, I obtain 60 t0 70 mpg by driving gently,the only criticism is that the dash controls take a lot of learning and understanding and could be set out to be more readily understandable. It is not the easiest car to enter or exit easily but the comfort, quietness and driving enjoyment make each trip a real pleasure. Lexus Guildford make my service trips most pleasant and agreeable.
John wrote on January 24, 2019 - 7:00pm Permalink
I really like my CT200h. It's perfect for city driving. However, it's not a good choice if it's the only car you have. Most people occasionally need a more powerful vehicle with a bigger trunk space.
kathleen wrote on July 27, 2019 - 11:34am Permalink
I own a 2014 CT200h I like the sporty feel when driving. I wonder if the UX hybrid will feel more like an SUV and less sporty in its handling